Scott to hold first ever solo art show at LAAC 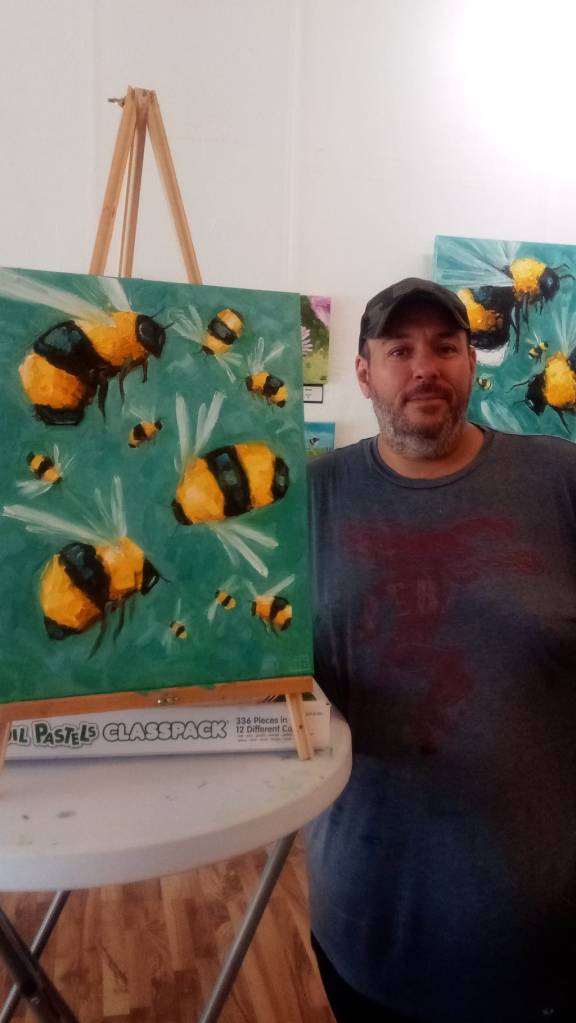 Local artist Josh Scott will be holding his first solo art show at the Lower Alabama Arts Coalition Saturday from 2 p.m., until 4 p.m.

Original oil and acrylic paintings will be on display in the gallery for the month of July. Scott will be doing a demo live oil painting at the show.

“I have probably 46 or 47 brand new pieces that haven’t been publicly shown at the gallery,” Scott said. “Most will be oil paintings, but there will also be some acrylic paintings.”

Scott’s passion for art began when he was a child.

“I’ve been drawing since I was a little kid, and I am 46 now. I started out with finger painting in my early 20s,” Scott said. “I did that for a while, then I got more advanced and moved to acrylic and then oil painting.”

After painting for many years, Scott decided to put his paintbrushes down and focus on music.

“I stopped to play music and started back [painting] 11 years ago,” Scott said. “People from Andalusia Ballet saw pictures of my work on facebook and asked me to start showing them. I didn’t start painting with the intent of getting better until about 7 years ago. My first show was in 2013, and at the time I was trying to paint just to produce more. It was fun to me, you know.

“My wife and I were going out of town when we heard about an art show at Robinson Park. She wanted me to bring my paintings, but I didn’t think they would sell. So, she grabbed up all of my stuff, a folding chair and a blanket and set everything up. Then we went out of town.”

To Scott’s surprise, his paintings were more popular than he had anticipated.

“Almost all of my paintings sold,” Scott said. “I didn’t expect it. After that, I just kept progressing.”

Scott’s next display was at a festival. He attended one year and met another artist who inspired him to have a booth at the festival the following year.

“In 2015 or 2016, I went to a festival. I spent the next year painting to have enough for a booth. The next year or the year after, I was the featured artist and made a painting of the first bank in Andalusia. It had a sepia color scheme,” Scott said. “It was made into shorts and things, and I’ve walked around town and have seen people wearing shirts with my painting on them.”

Scott has commissioned pieces over the years that can be seen in businesses across Covington County.

“I do commissions, but I am very selective because it can become a lot. I usually have requests for portraits or buildings or variations of other paintings I’ve done,” Scott said. “I have pieces all over buildings in town.”

When asked about his favorite personal painting, Scott had trouble choosing one.

“This is a tough one because I’ve done a lot of paintings,” Scott said. “Each one has something that I like, but I also notice all of the flaws and faults in them.”

“For the show, there is a painting of a glass of whiskey that I like. It has a good color temperature and everything. I tried to be loose and painterly with the brushstrokes as well as sticking to the colors. It’s not colorful and spectacular, but I like it.”

Scott explained that his paintings do not always go as planned, but he is coming to terms with the beauty that can become of it. “For my first public show, I was painting an elephant. I tried to make it abstract, but it wasn’t what my original intention was,” Scott said.

He thought the painting was ruined before he stepped back and looked at the result. “I realized that it turned out just fine,” Scott said. “I’m learning to not be so attached to what I’m looking for and just let it happen naturally. It’s a process of telling your brain to shut up, critical thinking, problem-solving, and decision making.”

“Sometimes when I step back and evaluate what’s happening, I fight with the paintings to get them where I want them. If I’m in the zone, I’m just watching it happen and I’m like an observer of the canvas. It has to be quiet in the house, with no thinking, for it to happen. It’s rare, but when it does it’s great.”

Scott encourages everyone who is interested to attend his show on Saturday.

“I hope everyone will come out. All of the new paintings will be up for the whole month of July, so if you can’t make it then they will still be on display. Everything is already hung up and ready to go,” Scott said.

Snacks will also be available at the show.