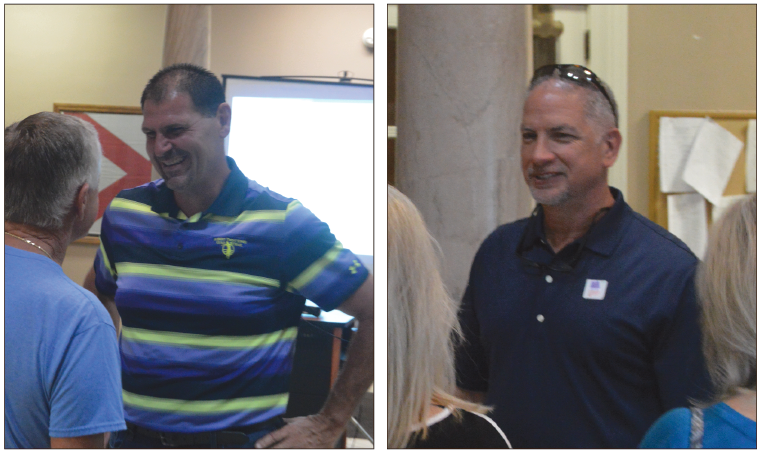 Two new commissioners will take their seats on the Covington County Commission.

“I’m very, very honored to be a Republican nominee going into the general election,” Smith said. “I’d like to thank everyone who voted for me and supported me, especially my family and friends and like I said all of the people who have stood behind me through this. It’s been a long road. I’m very proud of our turnout even though we had a low turnout in the polls today but it all turned out. Like I said, I am very honored to be the Republican nominee going into November.”

“I think it was a good, clean race. I guess the people didn’t want me and wanted him, so that’s good. That’s fine,” Barton said. “The sun’s gonna come up tomorrow anyway and I’ll be out in it. I appreciate the help of all of my family. Everybody worked hard. It’s tough for people to put themselves out there now because you fall under so much scrutiny, you, your family, everything you ever said or done. It’s been a trying time for everybody through the COVID and everything we’ve had to work with. Business in the county goes on and we’ll continue until Michael takes office and that will be in January I assume.”

“This has been a beast,” McGaha said. “I honestly never expected it to be drug out this far. Unforeseen circumstances that we had no control over added to it, but we stayed headstrong in the race and campaign. The people stayed with me and they trust me and support me I am honored that I was chosen by them to represent district four first of all, but Covington County as a whole.”

Looking forward, McGaha said he plans to build a really good relationship with the rest of the commissioners.

“I want to build a good working relationship with the rest of the commission to help move the county forward,” McGaha said. “That is really all I am concentrating on to start with.”

Stephanie Snodgrass came out with 40.93 percent of the votes in District 4.

“I really appreciate everybody that came out and supported us,” Snodgrass said. “We couldn’t have made it this far without them. I started out this race with a full heart for Covington County and it remains that way today. It is my deepest desire to see this county progress forward in a positive and successful way. We can just hope that the trend of positive growth continues.”

Probate Judge Stacy Brooks said the turnout was a lot better than she thought it would be.

“I saw that it started off pretty slow this morning,” Brooks said. “But things picked up. I was really impressed with the turnout because I expected it to be really low.”

Kendra Majors, Christopher Smith and Donnamy Steele all contributed to this article.