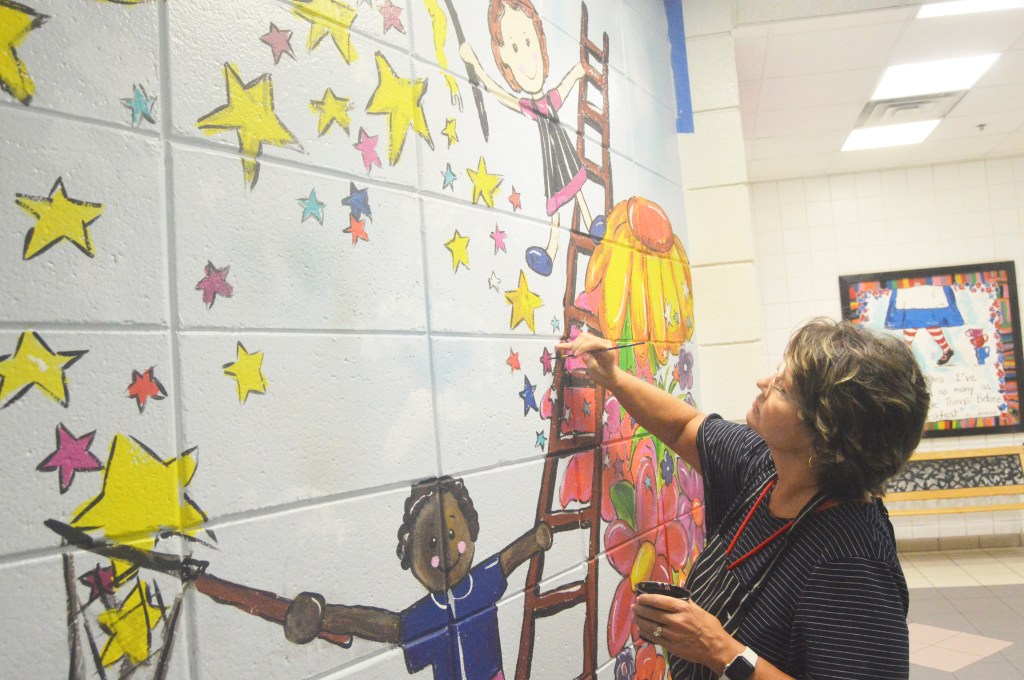 Instead of spending her extended summer break at home, Andalusia Elementary School music and art teacher Cathy Powell decided to use her free time at AES.

Since March, Powell has been covering the school walls with colorful and motivational murals to bring joy and fun to the students who will return in August.

Powell began working on her paintings when students were sent home in March. “We started in March when we were put on home lockdown. There was nobody here and of course something like this has to be done when no one is here,” Powell said.

Some of the murals Powell painted are in the boys’ and girls’ bathrooms with various themes, from bumblebees with “bee kind” quotes to airplanes with uplifting sayings.

Words of encouragement will be scattered across the school before students return in August. This is because AES is a Leader in Me school, said Powell.

“Since we are a Leader in Me school, we are supposed to incorporate the environment to make it a leadership environment,” Powell said. “So, we incorporate a lot of quotes and so on throughout the school. Each mural will have some kind of quote eventually.”

Powell has painted as a hobby all of her life.

“My first degree is in visual communication, and so when I moved to Andalusia there wasn’t a lot I could do with advertising here. So after I got married and went back to school and got my masters in education,” Powell said. “I then taught 1st grade for nine years, talented and gifted for another 10 years, and now I’m the music and art teacher.”

Powell has been painting small areas of the school for years, but this project has grown bigger than before.

“Hopefully we’ll have them all finished. Last year I was able to do the one in town center and outside of my door. With this summer being longer I was able to do a huge mural, the bathrooms, and touch up the murals on the outside,” Powell said. “I still have more to do, but it gets too hot outside so I like to paint in the early mornings or late afternoon.”

AES is filled with artwork from students as well, Powell said.

“They are part of projects. A lot of them we do as group learning and so on, and some are parts of projects that kids in my classroom have worked on. These are pieces from our art show we have every year but of course this year we didn’t get to. Every year we change to different things and they are all throughout the school,” Powell said. “Our school was really a blank slate. Not much had been done, so we wanted to make it become more alive as an elementary and child-friendly place.”

Powell feels inclined to create murals even more than before.

“I think this year it was more important because we left so suddenly,” Powell said. “So I wanted it to be new and comforting in a way of new and exciting and maybe not so scary. Something to have fun with.”

Powell is also preparing for her music classes for the upcoming school year. Due to enhanced safety measures, students need to have their own instruments in the classroom.

“We are getting creative with it this year. We are hoping people will donate coffee cans so we can utilize them as drums for the students,” Powell said. “We can use them to hold items and keep them separated as well.”

Coffee cans can be dropped off in front of Andalusia Elementary School. 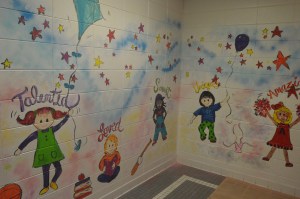