FOOTBALL TO START ON TIME: Head coaches react to AHSAA guidelines for season 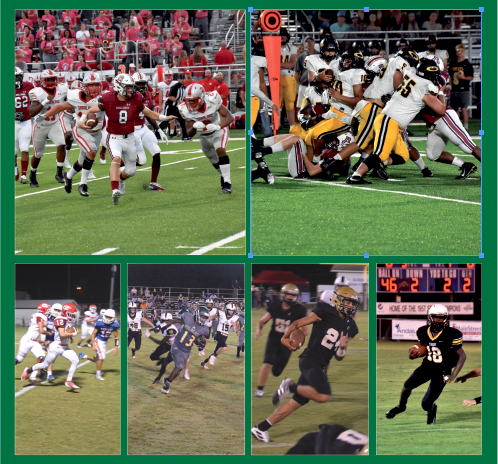 In March, COVID-19 shut down sports for good in Alabama, but after four months, the Alabama High School Athletic Association Central Board approved for fall sports to be played starting in August.

Head football coaches from across the county gave their thoughts and worries about the upcoming football season.

“We are doing the right things by our kids and by our communities,” Head coach Trent Taylor said. “There are no ifs, ands or buts about it. I’m not a doctor, and didn’t even play one on T.V., and this thing is bad, but I mean, we have been together for seven weeks and before this football season is over, we are going to have a case of COVID-19 at Andalusia schools and on the football team. The thing is, with these young people, they are going to get well. They are going to get well before they are even allowed to come back.”

Taylor said they are following all of the rules and guidelines that the AHSAA sent out.

“Masks are a big thing, of course,” Taylor said. “We wipe and spray the equipment down after every time somebody gets through. You wipe the balls down and you do all of those things. I think our kids have done a pretty good job. I’m not going to sit here and lie and say that we don’t have to constantly tell them to spread out, but we are following the guidelines that they have given us.”

The bottom line for Taylor is the physical and mental health of his players and students.

“Their physical health is important, but so is their mental health and just their psyche,” Taylor said. “I don’t care how you feel about sports, but our community, our state and our country needs it. You have to look at the risk versus the reward for this kind of thing and for young people, the risk isn’t that bad and this is important for the kids.”

Taylor said the biggest worry that he has about going back is injury and sickness.

“I think what you are going to find is that coaches are going to start doing a whole lot better throughout the state because if your starting left tackle gets COVID, then you better have coached up that next kid in line,” Taylor said. “You could walk into school Friday morning and find out that one of your starters is out and you better have a plan. I really think we have done a good job of that this summer.”

Andalusia High School opens up the season on August 21 against Faith Academy at home.

Things at Opp High School according to head coach Brent Hill have been different.

“I think the first week of everything was the biggest challenge for us because we had to get everybody used to the mask and the flow of things,” Hill said. “I’ll be honest, the players have really adjusted well.”

One of the biggest concerns Hill said he had for the season is something that he always worries about, his depth chart.

“Usually you look at how guys have progressed from the spring and where they are now,” Hill said. “This year, it has been a completely different mindset. You do have to worry about the depth chart, because you may have a kid who ends up with COVID. You are no longer thinking ones and twos, you’re thinking threes and fours based on if a kid tests positive. Not only if that kid tests positive, but if that kid has been around other kids for 15 minutes without a mask and within six feet. So, I don’t really stress about the things that we can control. I stress about the things that we can’t control, but right now, the governor, state superintendent and the athletic association are all on the same line. I know our schools had a lot of meetings and discussions just to try and do everything we can to make sure these kids get their season.”

Looking at the upcoming season, Hill said he is most excited for his senior class.

“Our seniors were a group of kids that had to play really too early,” Hill said. “I’m really ecstatic that these boys persevered and really worked through all of this get to play their senior year.”

The Bobcats take on Geneva High School on August 21.

On the Tiger front, interim head coach Bradley Stephens said they are ready to get going.

“We are really looking forward to progress from just summer stuff and hit with pads,” Stephens said. “Our summer training has gone pretty good.”

Stephens’s biggest worry about the season is if a kid tests positive and has to sit out for almost three weeks.

“If a kid tests positive, they have to quarantine for 14 days and then they tack on another seven,” Stephens said. “So, that basically means they are out for three weeks. Two weeks is already bad enough, but if its one of your starting players, then it becomes a problem. I’m also concerned with just the spread of it in general.”

When it comes to sanitizing and keeping the virus away, Stephens said they are doing what they can, the best that they can.

“We are trying to make sure that our kids are as safe as possible,” Stephens said. “But we are also being realistic at the same time too. You try to do what you can, so we clean weight rooms and wear masks when we are in the weight room. The most important thing is the safety of our kids.”

In his first season as interim head coach, Stephens said he is looking forward to what the kids can do this season.

“I have really high expectations,” Stephens said. “I feel like this can be the turnaround season for Straughn. This group of seniors has been through about roughly four coaches, which is really tough. My goal for me and my staff is just to try and provide as much success for these kids.”

At RLHS, head coach Kenny Skipper said it is time to get started again.

“I’m fine with returning,” Skipper said. “I think these kids need it to be honest with you. Things haven’t been normal since February, so I think it’s time to get started again.”

Over the summer, Skipper said his team has been doing the best that they can.

“It’s been going pretty good,” Skipper said. “We’ve had a pretty decent summer. We’re getting everything done as we can. It has been a pretty good summer. We’ve been doing what we can with masks and things like that to keep everyone safe. I’m looking forward to just getting to play hopefully. That’s the biggest thing. Hopefully, it will hold up and we’ll get everything to stay as scheduled.”

The biggest concern Skipper said he has is starting the season and not being able to finish.

“I would say just being able to finish,” Skipper said. “There are still so many question marks even now with saying we can play and practice, question marks about what’s going to happen in the next month or two months. I just hope we can finish.”

In his first year as head coach, Chris Littleton said he is ready to go.

“I’m excited and ready to get going,” Littleton said. “The kids are ready. We need to get back to school and we need to get back to sports. I know a lot of people who have been hit by the virus, including some of my family members, so I’m not downplaying the severity of that, but these kids need this sport and school so we will be taking precautions.”

Littleton said summer training has been a little different, but it has been going well.

“It’s different with smaller groups, but we are taking advantage of social distancing when we are inside and when we can have bigger groups outside with more room we can work harder. The majority has been in attendance at every workout and they have been working hard and are excited about playing again.”

Looking forward to the upcoming season, Littleton said he feels like he has a good group.

“Expectations are high around here and we just want to play ball,” Littleton said. “We have goals and under normal circumstances, we’d say win playoffs but right now we just want to play football. It’s a new world and goals change, but we are ready to play and put a good product out on the field.”

Head coach Rick Mercer said they are happy to be given the go-ahead to start proceeding as scheduled.

“We would love to return to normal but we all know we are facing unprecedented times and a new normal,” Mercer said. “We are happy to be given the word from the state that we are going to play as scheduled, especially since states around us are delaying their season but we are going to proceed as scheduled and our kids are excited about that. This will be the first time that we play Straughn, and it will be the first game. We’re all happy to be back. People were worried about the pandemic and we have people on both ends of the spectrum. Some think nothing of it and some take it too seriously, but we have to take it seriously enough to follow the rules and we have been social fitnessing is what I like to call it and hopefully everyone is remaining safe at home when we let our kids go. Just like Trump said, ‘we gotta go and get back to normal.’ Covington County has been a good system since I was here seven years ago and I’m sure it will stay that way through this.”

Over the summer, Mercer said he and his staff have been taking advantage of new software to go ‘paperless.’

“We were given the go-ahead back on June 6, but I told my guys we would start after

the 4th of July, and we play Straughn on the 21,” Mercer said. “We have a new software that we’re using called Dragonfly, trying to be paperless, but right now it’s labor-intensive like a PowerPoint. Once it’s done, everything is fine, but meanwhile, it’s just paperwork and red tape you have to cut through. As far as workouts go, we are about as good in shape as we usually are. We officially start practice next week on the first Monday in August. Most teams have gotten where they play 7 on 7’s right from the time schools are let out and then they play all summer and get fired up to have that first day of practice. Our workouts have been going fine and the kids are fired up to play and ready to get back to normal and prepare for Straughn and play that game.”

Mercer said his biggest concern is if they have to halt the season or if COVID numbers get bad and things have to shut down.

“I think the biggest doubt is if things come to a halt or if numbers get bad and we have to shut things down again, but if things go as we hope they do it’s just about week by week because if one player goes down it’s a domino effect,” Mercer said. “It happens everywhere, but it’s magnified here at Pleasant Home and at other 1A schools so if we can stay healthy and not hurt ourselves we’ll get through the season and get the success we are looking for.”