Mrs. Qumie Quick Taylor of Red Level went to be with Jesus Sunday morning, July 19, 2020. She was a resident of Andalusia Manor and 94 years of age.

Qumie was very active all her life, she owned and operated the Red Level Cafe for years, while also being one of the first female bus drivers for the Covington County School System. Always seeking ways to serve others, it was known that she was usually the first to respond to a death or any type of tragedy in the community, with one of her homemade red velvet cakes in hand. She and her school classmate, Mrs. Nell Bullock spearheaded the water system being developed into the Pigeon Creek community; she and her daughter, Rene’ were the duo that made the asphalt paving be done for Boykin Road. In the late 1950’s the Taylors and some of the other neighboring families established the Vera Cruz Methodist Church by relocating a church building from another area onto the grounds that held the Vera Cruz Cemetery that is now approximately 150 years of age. The Taylors were long time Stewarts of the Vera Cruz Methodist Church that remained open until recent years. Of all her church and community activities, Qumie’s God and family were always forefront in her life. She left a lasting legacy of love for all who knew her.

Mr. Daniel Lee Stokes, age 61, passed away at his home in Florala, Alabama on Wednesday, July 22, 2020.  He has finished his work on this Earth, and pancreatic cancer no longer has a hold on him.

Danny was an avid archer, having competed in and won numerous archery championships. He worked for Pepsi-Cola of Luverne for over 27 years and was dedicated to his Pepsi family and his loyal customers.

Funeral services for Mr. Daniel Lee Stokes will be held at 12 pm Saturday, July 25, 2020 from Wyatt Funeral Home Chapel with burial following in Beulah Cemetery. Bobby Brasher and Larry Wise will be officiating with eulogy given by daughter, Sadina Kimbril. Kennith Jackson, Jamie Jackson, Justin Jackson, Harold King, Jeremiah Judah and Steve Moore will be serving as pallbearers. Visitation will begin at 10 am Saturday.

Flowers will be accepted or memorials may be made to Pancreatic Cancer Action Network at https://pancan.org/ways-to-give/

The family will be receiving friends at the home of Kennith Jackson, 9149 Co Rd 89, Florala, Al. 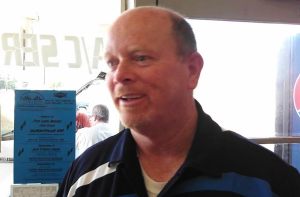