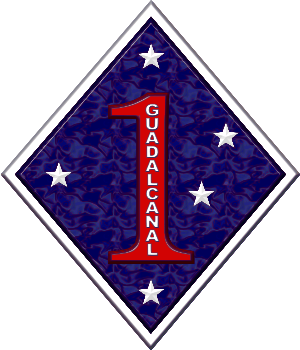 Just to recap some of the 1st Marine Division’s losses during the two campaigns in which Pfc. Sidney Phillips took part:

After Phillips left, the 1st Marines fought at Peleliu and Okinawa.

Pfc. Sidney Phillips lamented his time on Pavuvu. There was virtually no leisure activity for the Marines. To keep the men busy, the high command had them trudge several blocks to a crushed coral pit, fill their helmets with coral, return and spread the white coral on the company streets of their camp. Phillips remembered, “We felt like Chinese coolies. A rest camp on the equator! “

About a month before they were to leave Pavuvu, the men of the 1st Marine Division  drew names to see who would leave the island on the two ships sent to take them back to the states. Phillips’ name was drawn to take the second ship. It was his good fortune. Unknown to him, his childhood friend, Pvt. Eugene Sledge came in with the replacement 5th Marines on the first ship. Phillips tells how they came together on Pavuvu. “On the day after the first ship arrived, I was sitting on my cot when I noticed someone coming down the company street looking in each tent. I recognized ‘Ugin’ [his nickname] about three tents away and ran out into the company street screaming loudly as I could, ‘Ugin’.  He ran, I ran; we hugged each other and pounded on each other….a large crowd gathered….and I introduced him around and then we got back to pounding on each other”. For the two weeks until his departure, Sledge and Phillips spent most afternoons and evenings sitting around talking about old times in Mobile.

As the second ship prepared to leave Pavuvu for the states, Phillips and his buddies were still uneasy.  “We never felt we were ever really going to leave Pavuvu, that we were only going to awaken from a dream, until we boarded ship and pulled away”.

Phillips and his Marine buddies arrived in San Diego after the long voyage. At the pier, Phillips recalled the band that played for their arrival, “We came in about 10 in the morning and there was a Marine band there on the dock playing ‘Semper Fidelis’, ‘Stars and Stripes Forever’ and then they blared out with ‘Dixie’, and all us Southerners lost our cool and cried….As we filed down the gang plank with our worn packs and gear….many got down on their knees and kissed the dock”

They were taken to the Marine Depot at San Diego and put up in a tent city. It took two weeks to get everyone processed before Phillips, along with Dave Madison, a friend from Atmore that he’d met, were able to leave. Their troop train departed for the east coast, with stops at many places including New Orleans, Meridian, Birmingham and then on to New York. Phillips and Madison got off at Meridian and boarded a bus to Mobile. When Phillips arrived home, he said, My family treated me as if I had returned from the grave and we stayed up and talked until almost dawn….I had a whole month of furlough before I had to report to my new base.”

While home, Phillips again saw his best friend Eugene’s family. The Sledges loaned him one of their cars that Dr. Sledge used for bird hunting. Having left Mobile for the war before he had gotten his driver’s license, Phillips now proceeded to get a license. “I took the test, told the policeman a bunch of war stories and drove away with a driver’s license”. After a month, he took a bus to the Boca Chica Naval Air Station in south Florida, just seven miles north of Key West. It was boring duty for Phillips and ranged from guarding the fuel depot to security guard at one of the gates to the base. One day he read about the V12 Navy program, which was an officer training program. “Being an officer was not my goal, but I was extremely anxious to start getting some college credits” , Phillips recalled. He applied and was accepted. His next orders took him to Wilmington, NC and Camp Lejeune. At Camp Lejeune, Phillips’ class was put through a severe 3 week indoctrination, just to see who would stick it out. Of the 200 men who stuck with the program, 20 of them, including Phillips, were sent to the University of North Carolina at Chapel Hill. Given a 10 day break before reporting to UNC, Phillips and a friend hitch- hiked home to Mobile for a few days. So, in Feb 1945, Sid Phillips, carried through with a promise he’d made to himself earlier. Sometime back, just before leaving Mobile, he was in the Merchants Bank with a friend and noticed a pretty young teller that he remembered from his Murphy High School days. Now, home again, he made it straight to the bank to see if she was still there. She was and was not wearing a wedding ring. Thus, began a friendship that culminated in the marriage of Sidney Phillips and Mary Victoria Houston on April 15, 1946. Before that could happen, Phillips had to report back to the V12 program at UNC. The work there was difficult, but he made good grades. The V12 study program was interrupted by VJ Day in August, and was finally canceled in Dec 1945. Phillips’ enlistment was up on Dec 31, 1945.

Phillips recalled, “I had two full years of college credits to take into civilian life, plus four years of G I Bill time to continue my education. I felt the Marine Corps had really been good to me.”

Sidney Phillips attended Spring Hill College in Mobile and later attended medical school before becoming a family physician. Dr. Phillips completed his memoirs, “You’ll be Sor-Ree” in 1998. His wife, Mary, died in 2000. Dr. Phillips was a consultant for the 2010 HBO miniseries, “The Pacific”

The movie was based on the experiences of four central characters: John Basilone, Robert Leckie, Eugene Sledge and Sid Phillips. At the time of the filming, Phillips was the only one still alive and was able to give detailed information to the directors, Ken Burns and Steven Spielberg. 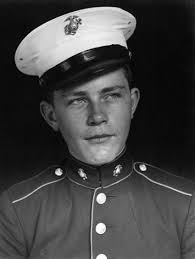