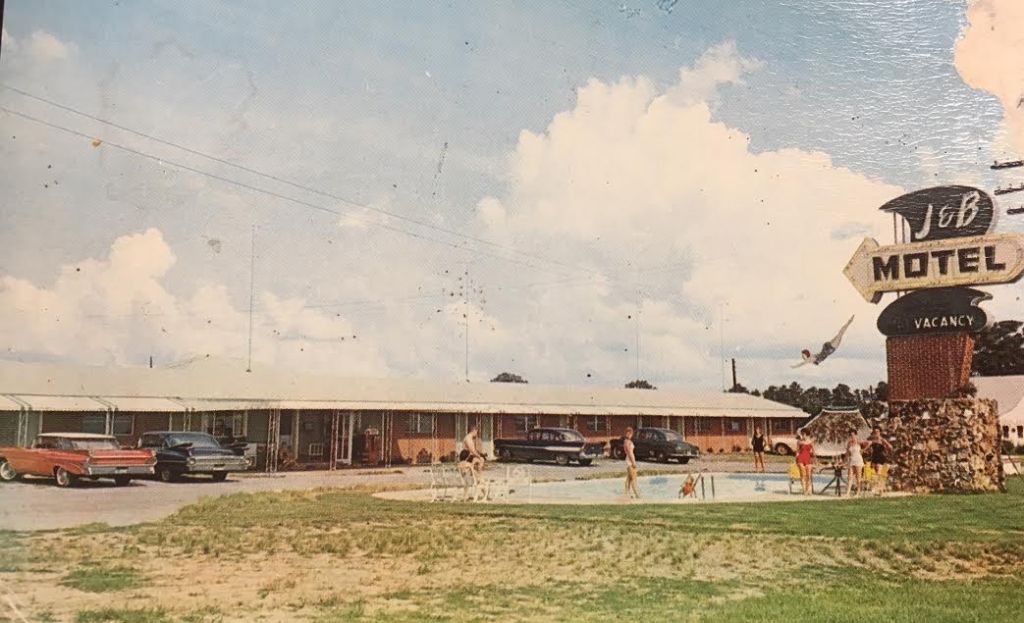 After World War II, a new concept in hotels emerged in the business world – the motel. Dictionaries define the term like this – “A motel or motor lodge is a hotel designed for motorists and usually has a parking area for motor vehicles.”

Andalusia was no exception. The new trend of lodging started soon after the end of the war. In 1947 Dr. E. L. Gatlin, local dentist, erected the Andalusia Motel & Motor Court initially offering 12 units but later adding 8 additional units in 1948 and 10 more in 1952. Located on East Three Notch Street, the establishment opened the new adjacent dining hall in 1951.

The Andalusia Star News – November 8, 1951 – “November 15 will mark the opening of the new dining hall and additional rooms that can accommodate travelers. Guest rooms are steam heated, have running ice water, and are furnished with Beauty Rest mattresses and electric blankets. The dining hall will have a seating capacity of 120 and a private dining room to accommodate 40 persons for private parties, club dinners, class reunions, and business groups.”

A 1954 newspaper ad reads, “The Andalusia Motel Dining Room is now under the supervision of Mrs. Avis Atkinson. She will be glad to see her friends and customers. Sunday dinner menu…$1.00”

I remember eating Sunday dinner there as a child in the 1950s and especially enjoying their strawberry shortcake! I believe that the dining rooms and original hotel rooms were on the west side of the street and the additional motor lodge rooms in separate buildings were on the east side.

Many of you may remember the motor court property which later was renamed “Campus Inn Apartments” owned in the 1970s and 1980s by Attorney Grady Lanier where he provided needed housing for LBW Jr. College baseball players. Lanier stated, “This helped the coaches in recruitment for the college. There was even a swimming pool on the site that the players enjoyed immensely.”

When Dr. Gatlin became 74 years old, he elected to retire and place the Andalusia Motel and Motor Court property up for auction. That was in December 1957. The purchasers were W. C. Faulkner, CCB president; M. L. Moore, GMC truck dealer; L. R. Deal, CCB vice-president; and Charles and Solon Dixon, lumbermen according to the newspaper.

According to Phillip Jones whose family bought the Andalusia Motel property in 1967, he states that Grady Chapman owned the property at some point in time. Chapman lived in the Cotswold style (often called “storybook”) stone house (now razed) on Three Notch originally built by the Tadlocks. Gordon and James Jones’ accounting firm occupied the top portion and tenants, Jack Cook’s printing company and Bob Taylor’s office supply company, occupied the lower floor where the restaurant was formerly located.

The Gables Apartments on Church Street built in 1947-8 by Mr. and Mrs. Tom Ellis were followed by the formal opening of the Gables Hotel in 1951. It is remembered that the Ellis family housed travelers in their home in the 1940s, bed and breakfast style, but completely converted their home to The Gables Hotel when they added a welcoming glassed-in porch entrance and a covered portico where automobiles could pass through loading and unloading baggage. Navy pilots from Pensacola visiting the “pretty Andalusia girls” on weekends during WWII were often guests of the Ellis’. Around 1961 after the death of her mother, affectionately known as “Mom Ellis”, Grace Ellis Worthen (later known as Grace Larson) continued with the hotel and restaurant ownership and management. Her son Bobby Russell assisted her for a time in between college and going into military service.

This landmark was a combination hotel/motel since lodgers   and diners could drive up and park easily on the street. Many festive events were held there including luncheons, bridge parties, club meetings, tea parties, birthday and anniversary parties, wedding parties, and business gatherings. The towns people gathered in front of The Gables each year to enjoy “May Day” at Church Street School. To say that The Gables was the center of community social gatherings for many years would be an understatement. Grace Larson welcomed more newcomers to Andalusia than anyone known by this writer. Some citizens called her “Andalusia’s official hostess!”

In August 1959 patrons and alumni of The Gables Apartments and friends of The Gables Hotel were invited to attend a “homecoming.” Mrs. Hyacinth Haynie Ellis and her daughter Mrs. Grace Worthen planned a covered dish supper party and dance marking the 12th anniversary of the erection of The Gables Apartments. More than 200 guests including their children arrived for the grand occasion held in The Gables Court with band music by the “Firehouse Five Plus Two.”

A quiet but dramatic celebration took place in Apartment 6-D when Mrs. S. H. Wilkinson was presented a dozen red carnations and was recognized as the “charter resident” of The Gables. She had lived there since it was first opened in 1947.

Eleven-year old Lelia Thompson, daughter of Mr. and Mrs. Howard Thompson of Crestview, was presented a box of candy because she had been the “first child” born of parents who lived at The Gables.

Many fond memories come to mind of The Gables Hotel especially one of an after-rehearsal party staged there the night before our 1967 wedding when my groom entertained and sang “I’m Gettin’ Married in the Morning” from “My Fair Lady!”

The Gables apartment complex was sold in November 1963 to Alvin J. Proctor, Marvin Walker, and George H. Proctor. There were 32 units, 16 1-bedroom and 16 2-bedroom apartments. Grace Worthen had owned and operated the apartments since the death of her mother in 1961. (Her father had passed away in 1956.)

Another new motel sprung up in 1956 when Mr. and Mrs. Morgan Adams built the Key Motel on Highway 29 North, five  miles north of Andalusia. It was advertised on June 28, 1956 as “EXCELLENT LODGING FOR TRAVELERS – The Key has 10 guest rooms, each complete with tile baths, shower and tub, wall-to-wall carpeting, and Beauty-rest mattresses. All rooms are 100 per cent air conditioned. Four more units are under construction and will soon be opened offering kitchen accommodations. The Adams wish to say ‘thanks’ to you who have directed guests to The Key since its opening. If you have more guests than you can comfortably care for, or have friends passing through, we will be glad to take care of them at The Key. Call 5167-W for information or reservations.”

The motel was later sold to Mr. and Mrs. John C. McCrory, but after Mr. McCrory’s untimely death at age 45 in 1963, Mrs. Floy Barrow McCrory continued to operate it exceptionally well. A beautiful neon sign out front advertised “VACANCY” or “NO VACANCY.”

Mrs. McCrory once hosted a 16th birthday party for her daughter Diane. It was also a spend-the-night party for teenager girls that this writer attended. I remember that she served delicious homemade doughnuts. None of us slept much, but we had a ball giggling the night away! There was even a swimming pool! Mrs. McCrory’s other two children were Wayne and Patti.

In 1959 the J & B Motel and Café was built by Mr. and Mrs. Bradley Greene. A newspaper ad of April 16, 1959 in The Andalusia Star News reads “J & B Dining Room at J & B Motel & Café on Highway 29 North will remain open until 12 midnight seven days a week beginning Friday, April 17. Sunday Dinner Special with turkey and all the trimmings – $1.00. Come out, bring your friends, and enjoy the delicious food and courteous service of Bradley and Jewell Greene. We give Top Value Stamps. Bo Williams, Andalusia’s well-known cook, 30 years experience.”

The Andalusia Star News – October 31, 1963 edition reads, “New Motel Plans An Open House – An Open House will mark the formal opening of the new Town Line Motel situated at the intersection of Brewton Road and the U. S. 29 By-Pass South on Sunday afternoon. Mr. and Mrs. R. Y. Williamson, the owners and operators of the newly constructed motel have invited the public to the event scheduled from 2 to 4 p. m. The 10-unit motel is constructed so that expansion will be possible in the future. Wall-to-wall carpeting, a telephone and television in each room, and beds with Simmons mattresses are featured in the spacious and modern hotel. A swimming pool is planned and will be completed for use in the spring and summer of 1964. The Town Line Motel Restaurant is to be located adjacent to the new motel. Buck Thompson and Mack Gantt will own and operate that facility.”

The 1960s is the end of this story for now. Many new chain motels with national brand names and hometown ownership have appeared in recent years not only in Andalusia but also in Covington County.  Our area is indeed fortunate to have a number of events throughout the year to keep these motel rooms occupied. Instead of carpeted rooms with just telephone and television, today’s motels now offer free Wi-Fi, charging station for computers, tablets, phones, and cameras, in-room fridge, coffee and tea makers, televisions with remotes,  ceramic tile bathrooms, plush bedding and linens, hand-held hair dryers, irons, laundry bags, security door locks, wake-up calls, exercise rooms and swimming pools, complimentary breakfast, computer and printer service in lobby, and room service. Do you Remember When all of those amenities were never dreamed of? Wonder what the future holds?

The Gables, the Key, and the Townline hotel/motels are still in operation today. The J & B is now converted to apartments. The Andalusia Motel and Motor Court is a business of the past –  the motel/restaurant building is still standing, the motor court across the street has been razed. Still vivid in my thoughts is the story in last week’s column, The Montezuma Hotel, “the hotel that never was.” All in all, we’ve come a long way, baby, since the late 1930s!