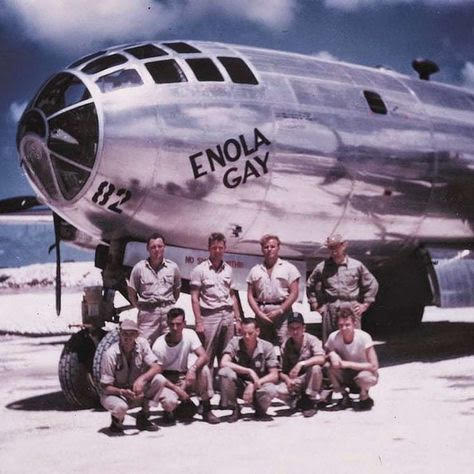 The crew of the B-29 "Enola Gay" that dropped the atom bomb on Hiroshima [Photo: Pinterest]

If you know your WWII history, you might question the above title and date. That’s because the invasion never happened.

Operation Downfall, the codename for the invasion of Japan, was scheduled to begin on Nov 1, 1945. Thankfully, Japan surrendered, unconditionally on Aug 15, 1945, some 77 days before the invasion was set to take place. Their surrender was caused by the dropping of two nuclear bombs by the United States on Aug 6 and Aug 9, on the cities of Hiroshima and Nagasaki, respectively. Even when it was obvious that the use of the atomic bomb was the direct cause of Japan’s surrender, their use became controversial at the time and has remained so these many years later. Critics of the use of nuclear weapons point to the horrific deaths and injuries to civilians. They further point out that Japan had already been defeated.

That being said, there is a big difference between an enemy that has been defeated and one that chooses to surrender. Prior to the dropping of the atomic bombs, Japan had been planning its defense against an American invasion. That plan, Operation Ketsugo [Decisive in English] , called for committing the entire population of Japan against the US invaders. Beginning in June 1945, the military leaders of Japan started a propaganda campaign called “The Glorious Death of One Hundred Million.”  The message to the Japanese populace was that “it is glorious to die for the Holy Emperor of Japan, and every single Japanese man, woman and child should die for the Emperor when the Allies arrive”. Japan’s leaders called this “gyokusai” –the shattering of jade.” Every man, woman and child would be mobilized. They were told to use any tool or sharp object [even sharpened sticks], and to strike for the abdomen. The remaining aircraft and pilots would continue the “kamikaze [divine wind]” attacks that had been so effective during the Okinawan campaign. It’s not likely that the entire population of 100 million would have followed the Emperor’s decree, but it is likely that many millions would have died if there had been an invasion.

The decision to use the atomic bomb was both a tactical and a moral decision. To better understand that decision, it is best to go back to that time in 1945. Vice President Harry S Truman became the 33rd President of the United States on Apr 12, 1945, after the death of President Roosevelt. During his short time as Vice President, Truman had seen very little of President Roosevelt and had never been briefed on the Manhattan Project , the Top Secret program to develop the atomic bomb. He was ill prepared to have to make one of the most difficult decisions of WW II – whether to use the bomb to try and end the war.

When critics point to the large loss of life and the prolonged suffering caused by the earlieruse of the atomic bombs, they tend to overlook the horrific death and destruction caused by earlier fire bombings of Tokyo and other Japanese cities. Casualties from Hiroshima and Nagasaki totaled some 100,000 dead and over 200,000 injured. By contrast, in Mar 9-10, 1945, the US sent an armada of 334 B-29 bombers to fire bomb Tokyo. They carried over 1660 tons of incendiary bombs. In that single strike, over 100,000 people were killed and several hundred thousand more were injured. Over 15 square miles of Tokyo burned to the ground and more than a million people were left homeless. The reality of the Tokyo fire bombing is better understood by using a quote from the book, “War Without Mercy” by historian John Dower, “The heat from the conflagration was so intense that in some places, canals boiled, metal melted, and buildings and human beings burst spontaneously into flames.”  Besides Tokyo, several more large Japanese cities were fire-bombed. Total casualties can only be estimated, but over 300,000 civilians were killed and another 473,000 injured.

There would be much more loss of life on both sides before Truman would be faced with that fateful decision to use “the bomb” or not.

In late summer 1945, Truman contemplated the most recent battle against the Japanese, the Battle of Okinawa . The island lay some 350 miles from Japan and offered a convenient jumping off point for the planned future invasion.  For Okinawa, Allied forces assembled the largest amphibious operation of the Pacific war and began the assault on Apr 1, 1945. Over the next 82 days until the battle ended on Jun 22, the Japanese grudgingly gave up ground at the expense of some 75,000 allied casualties. The US alone lost 12,520 killed with a further 36,000 wounded. Over 100,000 Japanese soldiers were killed and it is estimated that between 50,000 and 150,000 Okinawan civilians were killed. The Japanese propaganda had painted US troops as “murderers, rapists and even worse”, to the point that many civilians committed suicide. US combat photographers filmed many Okinawan mothers throwing their children from cliffs,  then swiftly jumping behind them to the rocks below?  With the bloodbath of Okinawa behind them, Allied forces fearfully made plans for the invasion of mainland Japan.

In planning for Operation Downfall , it was decided that a force of some 766,000 troops would be needed for D Day. A comparison with D Day at Normandy is informative. Over 156,000 Allied troops landed at Normandy, resulting in approximately 10,000 casualties, of which 4,400 were killed. The Normandy invasion was opposed by some 50,000 German troops.

Comparing the likely Japanese defenses, US intelligence estimated the invasion would be opposed by some 350,000 Japanese troops on the island of Kyushu. After the war was over, the US learned that there were some 784,000 armed Japanese troops, and another 575,000 Kyushu home defense forces on the island. Even with the under estimation of the number of defenders facing the invasion, the American planners [in 1944] expected US casualties varied from a low of 250,000 to a high of a million. They estimated that Japanese casualties could run between 5 and 10 million.

The last wartime  strategy meeting between the US, the United Kingdom and the Soviet Union was held at Potsdam [near Berlin] from July 17 – Aug 2. At the end of the conference, the Allies issued The Potsdam Declaration. It set the terms for Japan’s surrender and included an ultimatum: “We will not deviate from them. There are no alternatives. We shall brook no delay.” Besides making the ultimatum public and having it carried by radio throughout the world, the US dropped over 3 million leaflets over Japanese cities, urging civilians to flee and warned of “prompt and utter destruction” unless Japan surrendered unconditionally. In addition, President Truman gave a radio address in which he warned Japan of “ a coming rain of ruin from the air, the like of which has never been seen on the earth.”

Contained within the ultimatum was a call for “the elimination, for all time, the authority and influence of those who have deceived and misled the people of Japan into embarking on world conquest.”  The ultimatum also set the guidelines for Allied occupation of Japan after the surrender. There was no mention of the Emperor. Much of the Potsdam ultimatum was deliberately left ambiguous so that the future occupation of Japan could be worked out.

Emperor Hirohito and his war cabinet obviously learned of the Potsdam Declaration but did not respond. They held out hope for a negotiated end to the war with the Soviet Union acting as an intermediary. However, on Aug 8, the Soviet Union invaded Japanese held Manchuria. On Aug 9, the US dropped the second atomic bomb on Nagasaki. Just before midnight on Aug 9, Emperor Hirohito convened his war council. The long debate ended with their acceptance of the Potsdam Declaration “with the understanding that said declaration does not compromise  …..the prerogatives of His Majesty as the sovereign ruler.” The message was relayed to the US on Aug 10. On Aug 12, the US sent its answer: “The authority of the emperor and the Japanese government to rule the state shall be subject to the Supreme Commander of the Allied Power.” After two more days debate about “what the statement implied”, Emperor Hirohito told the council that “Peace is preferable to destruction,” and asked them to prepare the surrender text. Even with that decision, there was one more problem. Early on the morning of Aug 15, Japanese Army Maj. Kenji Hatanaka led a small group of Army rebels who seized the Imperial Palace and burned the home of Prime Minister Suzuki. Their rebellion was crushed shortly after dawn and Emperor Hirohito went on national radio at noon to announce the surrender. The US immediately accepted Japan’s surrender.

The debate about the use of the atomic bomb which “let the nuclear Genie out of the bottle”, would continue to this day. One thing is beyond debate: Many millions of Japanese and a slightly smaller number of Americans are alive today because their Fathers were not sacrificed in an invasion of Japan. 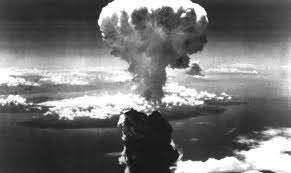