75th anniversary of Hiroshima and Nagasaki 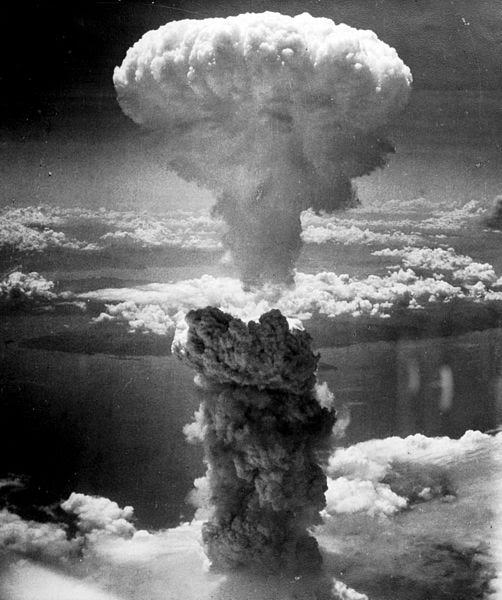 This week marks the 75th anniversary of the dropping of atomic bombs on Hiroshima and Nagasaki by the United States. The use of atomic weapons was controversial then and has remained so for many years. Japan had been beaten so badly that they had no effective Navy or Air Force. Their people were starving because the US had shut down maritime trade needed to keep the island supplied with raw materials, food and  fuel. Still, Japan was not ready to surrender. Some people have attributed their delay in accepting the terms of surrender to Bushido, the ancient Samurai code adhered to by most of their military leaders. Bushido was closely aligned with the Shinto religion and placed much emphasis on pride, honor and saving face.

The nuclear bombs used on Hiroshima and Nagasaki were produced through the secret wartime Manhattan Project [1942-46]. The director of the project was Maj.Gen. Leslie Groves of the US Army Corps of Engineers. The bombs were assembled at the Los Alamos Laboratory under the direction of nuclear physicist Dr. J Robert Oppenheimer. Research and production of the parts for the bombs took place at over 30 sites in the US, Canada and the United Kingdom.  The wartime cost of the project was some 2 billion dollars [about 23 billion in 2018]. The project was so secret that Vice President Truman did not know about it until becoming President after President Roosevelt died.

The first bomb was dropped on Hiroshima on Aug 6, 1945. That bomb, known as Little Boy,  was a uranium gun-type bomb that exploded with a force of about 13 kilotons. The bomb was the only uranium bomb constructed. Its design was based upon the explosive power produced when a hollow cylinder of enriched uranium was shot into a solid cylinder of the same material. An explosive charge of nitrocellulose propellant was used to “fire” the uranium gun. When the two masses were joined, fission took place, producing a very large explosion accompanied by deadly radiation. The nuclear scientists were fairly certain the design of Little Boy would work. The difficulty in obtaining enough uranium for the bomb, precluded a test before it was used.

Hiroshima was home to some 280,000-290,000 civilians and around 43,000 soldiers. Some 66,000 people died as the immediate result of the bombing, including 12 American POWs.. Somewhere between 90,000 and 150,000 people are believed to have died within four months from the effects of the bomb, including those that died from the burns, radiation sickness and cancer. Nine of the American POWs were killed immediately in the blast while the other three died from radiation sickness a short time later.

The second bomb was dropped on Nagasaki on Aug 9. That bomb was called Fat Man . It was an “implosion-type” bomb made from plutonium. Fat Man was the same type of bomb that had been tested in the New Mexico desert on July 16, 1945. Referred to as the Trinity test, it took place some 35 miles southeast of Socorro, NM in the Jornado del Muerto desert. The site  was located on the Army Air Force bombing and gunnery range, which is now the White Sands Missile Range. That first bomb, code named Gadget , needed to be tested because the scientists weren’t sure it would detonate. In assembling the bomb, a sub-critical mass of non-critical plutonium [not fissionable] was placed at the center core of the bomb, surrounded by several thousand pounds of high-explosive. The design was such that when the high-explosive was detonated, the force was directed inward to the plutonium core. The plutonium core was crushed into a super-critical mass, setting off a chain reaction that produced the nuclear explosion and radiation.

Most historians have attributed Japan’s decision to surrender to two events. On Aug 8, the day before Nagasaki was bombed, Russian troops attacked Japanese occupied Manchuria. Emperor Hirohito and his war cabinet had held out hope that they could get the Russians to mediate a more favorable end to the war [than the US demand for unconditional surrender]. After the Russian attack on the 8th and the bombing of Nagasaki on the 9th, Emperor Hirohito told his council that “Peace is preferable to destruction.”

Early on the morning of Aug 15, troops loyal to Hirohito, had to put down a rebellion of Army officers who had seized the Imperial Palace. At noon that day, the Emperor addressed the nation by radio for the first time. He did not use the word “surrender” but instead asked his country “to endure the unendurable and bear the unbearable”. In a classic understatement, he said that “The war did not turn in Japan’s favor.” With his country in ruins and nearly 3 million Japanese dead, the Emperor was still trying to “save face”.

Many historians have always believed that the goal of the Manhattan Project was to produce the two bombs that ended the war. In fact, the purpose of the Manhattan Project was to produce a nuclear bomb making industry. A third bomb was scheduled to be dropped on Tokyo on Aug 19 if the Japanese had not surrendered on the 15th. The US high command had plans to drop 7 more nuclear bombs by the end of October – 3 plutonium and 1 uranium every month or so. The use of both uranium and plutonium was to keep from depleting the raw material stockpile.

[Sources: The Bulletin of the Atomic Scientists; The Atomic Heritage Foundation; The National Museum of Nuclear Science and History; Wikipedia; The Encyclopedia Britannica; National Geographic.org; “The Third Shot” by The Outrider Foundation]