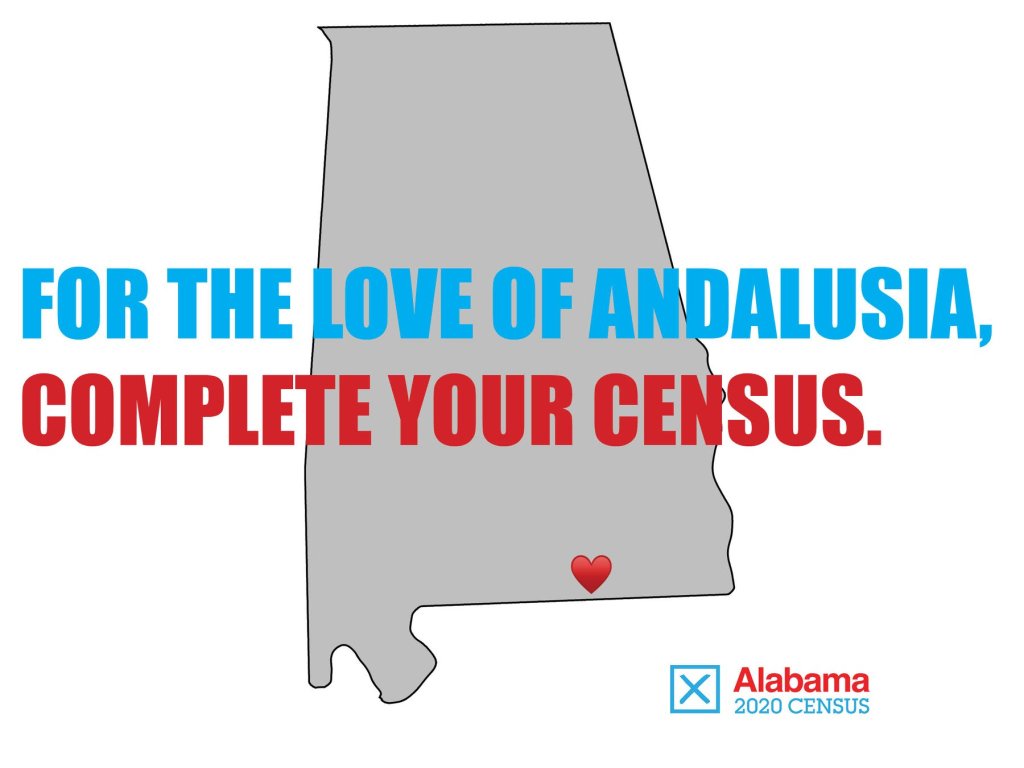 U.S. Census workers will begin door-to-door canvassing in Andalusia today, Saturday, August 8, just as local and state officials are urging residents to take steps to make sure they are counted.

The Census Bureau has shortened the deadline to respond to the census by a month, and will end counting on Sept. 30, it announced Monday, prompting concerns that some will not be counted.

As of Friday, 62 percent of the estimated U.S. population had responded to the Census. The response rate in Alabama is 60.7 percent, and in Andalusia is 60.1 percent. If the rate does not increase to at least 90 percent by the end of September, the state will lose one or two Congressional seats, as well as federal funding.

“It is extremely important that every person in Andalusia and Alabama be counted in the 2020 Census,” Mayor Earl Johnson said. “We know there were areas of the city that were undercounted in 2010, and this has affected our ability to recruit retail here. A second undercount in 2020 would continue to hamper economic development efforts and affect federal grant funding for the next 10 years.

“We know that at least one seat in the U.S. Congress, and up to $13 billion in federal funding that we depend upon for healthcare, education, and infrastructure are at state,” Johnson said. “I urge every citizen of Andalusia who has not done so to take six minutes to complete the Census today.”

The City of Andalusia and the Andalusia Area Chamber of Commerce are joining Alabama’s “Drop Everything and Be Counted” effort and encouraging businesses that have not already done so to schedule time this Wednesday, August 12, for employees to complete the 2020 Census.

“If you are a business owner who is willing to allow employees time to do this during the workday, and you need help, please let us know,” the mayor said. “We can send someone with an electronic device and help facilitate their registration.”

“At the Chamber we believe that improvements to Alabama’s essential services are good for business,” Executive Director Chrissie Duffy said. “There is up to $13 billion in federal funding at stake, and we want to make sure get our share. This small task plays an important role in our collective futures.That’s why we’re encouraging all Covington County businesses to join us for Drop Everything Day on August 12th.”

Duffy suggested hosting a breakfast for your employees during which they can complete the census form, or blocking oﬀ half an hour for employees to all focus just on taking the census.

“Create time slots for employees to sign up and take the census if you don’t have enough computers available,” she said. “Whatever strategy you choose, let your employees know how important the 2020 Census is. It’s only 10 questions, but it can make a huge impact on our communities.”

“We have spoken with several local residents who will be working for the Census here,” Johnson said. “We have city employees calling all residents to encourage them to register.