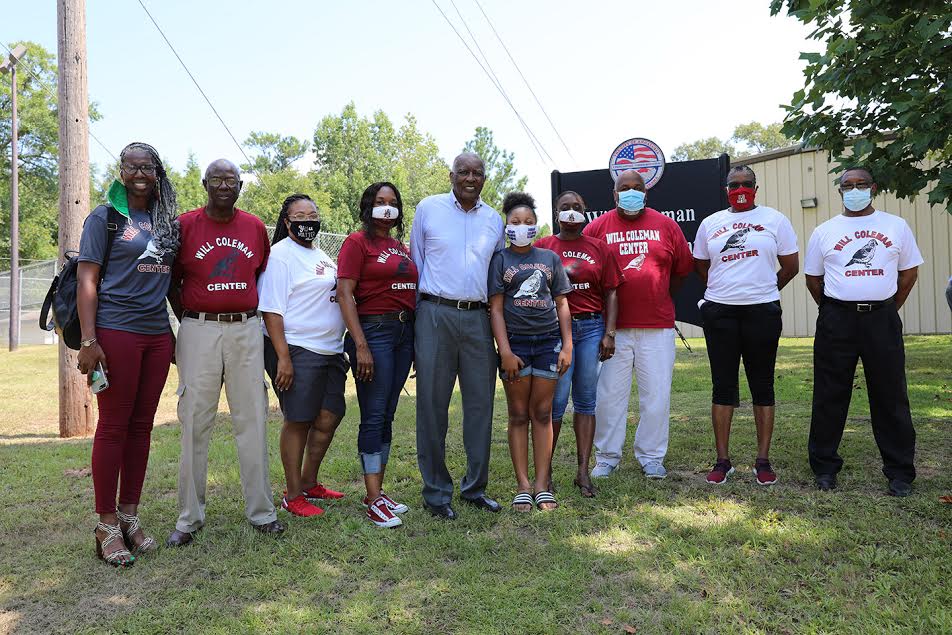 Family members, former students who became co-workers, and friends gathered at the Will Coleman Center Friday morning to pay tribute to the man who mentored countless young people through the Center’s programming for almost 50 years.

Coach Richard Robertson is retiring from the responsibilities of the Center in what would have been his 49th official year, had the COVID-19 virus not shut down activities there this summer. And he’s not retiring because he wants to, but because “my girls just boss me,” he said, referring to his daughters, Michele Robertson and Mirenda Kirksey.

Andalusia Director of Leisure Services Tommie Agee said one of the blessings of his move to Andalusia has been getting to know Coach Robertson.

“Anytime I go somewhere representing the City, people stop me and ask, ‘Do you know Coach Robertson?’ ” he said. “He’s done a great job here at the Center, and we’re going to miss him.”

Former Leisure Service Director Dwight Mikel said, who first met Coach Robertson as a student during integration said, “I love and respect Coach for what he was able to teach not only to the kids, but to some of us grown-ups, too.”

Mikel said Robertson always made people aware of the sacrifices made by earlier generations that made so many things possible.

Councilman Will Sconiers said he grew up swimming at the Coleman Center in the afternoons, and playing Little League baseball for Coach Robertson in the early evenings.

“He was a father figure to a lot of young men in the community,” he said. “He was so dedicated, he would pick us up and take us to practice just to make sure we got there.”

Rose White-Parker recalled that she wanted badly to play basketball in school, but here were no teams for the girls in 1976.

White-Parker dressed out with the boys until Robertson could put a girls team together. Later, White-Parker worked with Coach Robertson at the Coleman Center and in the Andalusia City Schools system, where she teaches physical education and coaches girls JV basketball.

“I would meet him in the hallway, and if I needed help, we’d go work out the X’s and O’s,” she said.

Ann Shakespeare said she and all of her siblings grew up in the neighborhood with Coach Robertson and participated in the programs he ran at the Coleman Center.

“Coach embraced all children,” she said. “He was always encouraging someone’s child to keep going.”

Joe Nix said one of the hardest things he had to do as a youngster was learn to call his first cousin Richard, “Coach Robertson.”

“He was my first JV football coach,” Nix recalled. “In those days, if I got the ball, I would always go around one of the ends. He taught me that the shortest distance between two points is a straight line.”

Marshall Locke grew up next door to Robertson.

“He was more than a coach, he was a mentor,” Locke said. Locke played sports with his neighbor as his coach, then grew up to be an assistant coach under his tutelage.

Paula Simpson said she could remember participating in Coach Robertson’s summer program when she was a five-year-old.

“We called it play school,” she said. “Every year, I could not wait until school was out so I could go to play school.”

Later, she said, Coach Robertson told her to stop at the Center and fill out some paperwork.

“The next thing I knew, I had my first job. He would give us ‘nuggets’ all day every day,” she said. “I’ve been a teacher for 26 years, and I pass those nuggets along to my students every day.

“When I started a family, and my daughter turned 5, she was right up here every summer,” she said.

“I remember Coach would pull up with some bags of peaches,” she said. “He would tell us, ‘Come get you a peach. When you get done, go plant this seed, and next year, you bring me a peach.’ Same thing with watermelons. We planted the watermelon seeds right up there on the fence row every year, and if the deer didn’t get them, we’d have watermelons.

Simpson said she tells her students every year the same thing Coach Robertson told her and her friends.

Sammie Glover, who grew up with Robertson, said his friend has done much more for the community than teach them X’s and O’s.

“Any kid who needed assistance, Coach Robertson was there,” Glover said. “He helped produce young men and women of character.”

Mayor Earl Johnson said perhaps no man in the history of Andalusia has touched as many lives as Robertson.

“This Center is named after Will Coleman, and he was a great man, too. But he didn’t spend nearly as much time here as Richard Robertson did. I’m going to request that the Council add your name to the Center,” Johnson told Robertson in presenting a resolution in his honor. “

Kirksey and Robertson said their father, who has been alternating his time between them in Tallahassee and Texas during the pandemic, really doesn’t want to be anywhere but in Andalusia and at the Coleman Center.

“He thinks we’re too harsh,” Michele Robertson said. “We just want to make sure we still have him around so we can continue to love on him.” 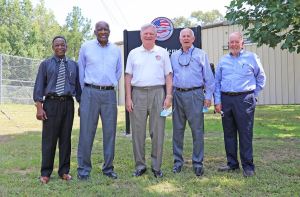