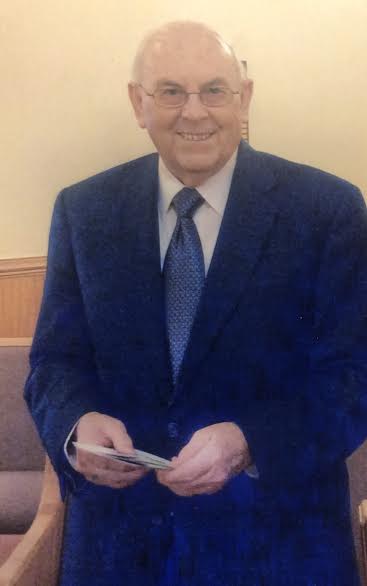 Herb Carlisle led a life that was anything but ordinary, inspiring him to publish his first memoir.

In his 91 years, he played many roles, from being a soldier stationed in Korea to a mayor in Ohio. Carlisle’s roots were deeply planted in Alabama soil, resulting in his return to the state after many years away from home.

“I grew up in Gilbertown, Alabama, in Choctaw County. We lived in a family of 10, with eight children and two parents,” Carlisle said. “We lived in a house without insulation or indoor and outdoor plumbing. That was typical of a lot of country people in the depression.”

Carlisle’s humble beginnings inspired him to begin writing his memoir.

“I published it primarily for my children, but I’ve got so much of it so I decided to make it into a book. It’s about my humble beginnings, growing up in the depression, and my career,” Carlisle said.

Carlisle described the things he witnessed while in Korea, and he delves deeper into the topic in his memoir.

“There is a chapter about my military experience. I was in Korea and I was in a MASH unit, a military hospital. I was in the medics and a platoon leader for the army. When the patients came in, some were able to be evacuated by a jeep. We had stretchers on it or any other type vehicle we had. When it was really serious we had helicopters to fly out and get them,” Carlisle said. “It was an interesting tour. We saw the results of what war can do.”

The Carlisle family name was no stranger to war. After hearing war stories from his brothers, Carlisle did not hesitate to join the national guard when his friend suggested it.

“I was in the medical company and a guy that I knew talked me into joining the national guard. So, I joined that and we had to go to camp in the summer,” Carlisle said. “One summer we heard rumors of North Korea invading South Korea, and then we heard rumors that we might be called to go. In January our division was called.”

Carlisle was excited for the opportunity to serve overseas.

“It didn’t bother me. I had two brothers in the army and they told these war stories that they had, and I said I’m gonna miss this if I don’t hurry and go. In the summer, I called our division surgeon and told him that next time they got a request for officers in my category, I wanted to go,” Carlisle said. “About three weeks later, I left and I stayed over there for a year. It was interesting. I wasn’t afraid though, I didn’t get afraid at all.”

Carlisle remembered finding joy in his time overseas. When he was in Korea, he contacted a friend who was stationed nearby and made the risky decision to go and visit him. “I did some crazy things that I shouldn’t have done,” Carlisle said. “There were snipers everywhere. There was a guy that I knew in Mobile that was in one of the divisions nearby, and so I found out his address and everything and I went over to see him. All I had was an M1 rifle and that wouldn’t have done a lot of good.”

Before his return to the south, Carlisle retired after working at an air force base in 1983. While he was there, he also served as the mayor in a city in Ohio.

“I was in Ohio for 19 years. Some people had been on council for 25-30 years and no one was doing anything, so I got involved in politics there. I served a four-year term and then I got re-elected to the council for four more. The mayor decided not to run two years later, so I decided to run. I became mayor for two years and it was the hardest work I had ever had,” Carlisle said.

One chapter of the memoir is dedicated to Carlisle’s spiritual background and how it ties into his life today.

“I’m a southern baptist. I got involved in a number of things and one is I ministered to the senior adults at the first baptist church for about 7 years. It was an interesting experience,” Carlisle said.

Carlisle ties his faith into his two experiences with tumors and his journey to a hospital in Gainesville, Georgia.

“I had a benign tumor and had surgery for that. Since the doctor didn’t get it all, five years later it was growing back. I had radiation so I decided to go to a hospital in Gainesville, Florida. I felt guilty sometimes because I wasn’t as ill as some of these others that were in bad shape, so I did what I could to help them,” Carlisle said.

In an attempt to bring comfort to the other patients at the hospital, Carlisle passed out bible verses to them.

“I got the secretary at the church to get up a stack of scriptures that would be comforting,” Carlisle said. “I started passing them out at the hospital and they seemed to like that.”

To purchase From Poverty to Lower Middle Class by Herbert Carlisle, call the author at 334-222-7353 or you can purchase a copy on Amazon.