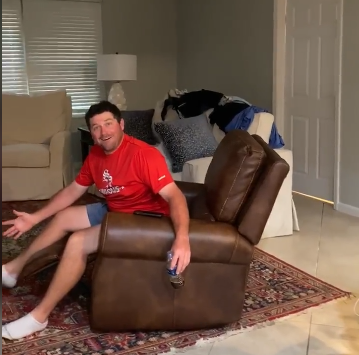 What started as a harmless prank video turned into an overnight viral sensation for Andalusia locals Lauren and Jordan Maynor.

After seeing an Instagram trend, L. Maynor knew her husband would be the perfect target.

The trend involves acting as an influencer talking to their “followers” in front of their spouse.

“I stumbled across this series of people doing this challenge on Instagram,” L. Maynor said. “I immediately thought that Jordan would be perfect for this. We actually had just gotten back from a baseball tournament that weekend and I completely forgot about doing the challenge. Well, I remembered when we got home and I quickly got up. He was just lounging in his chair, trying to watch a TV show and I knew I was never going to find a time that he was just sitting like that.”

L. Maynor said her husband reacted exactly how she expected.

“Jordan is very dramatic and a little over the top,” L. Maynor said. “I mean, he didn’t even let me finish my first sentence. So, I knew that he was going to be a good subject for this, but he was a little extra. I think he kept going with it because I was laughing so hard at it. If I had a negative reaction to what he was saying then I think he would have stopped, but I was trying to keep it together.”

In the video, L. Maynor joked that she wakes up at 4 a.m., to clean her house, to which J. Maynor replied, “You ain’t never woke up at 4 in the morning. Ever!”

“Pre-quarantine, I actually would wake up around 5:30 a.m.,” L. Maynor said. “But it definitely wasn’t to get up and clean.”

Before she posted the video, L. Maynor said she knew that her close friends and family would think that it was funny, but never expected it to reach the number of people that it did.

“I knew that my friends and family would think it would be funny because they all know Jordan and his personality,” L. Maynor said. “I honestly didn’t even think that my posts were on public. In the first eight minutes, it was viewed 100 times and we thought that it was cool, but we didn’t ever think it would reach 1 million people.”

Now with 1.3 million views, the Maynor’s are trying to deal with their new Internet fame.

“Everyone wants our autograph and we will definitely remember everyone when we get to Hollywood,” L. Maynor jokingly said. “We actually went out to Golden Rule last night and there were two people that we did not know that asked if we were from that video. Jordan actually wanted me to take down the past right after it was on Facebook. He immediately freaked out saying, ‘You have to take that down,’ and he was actually going to report it. Then he started seeing how many people liked it and now he is absolutely living it up. He is absolutely at celebrity status right now.”

Though this post reached such viral status, L. Maynor said it will probably be their only video.

“Jordan is just a humorous individual and that video is just a preview of what it is like to live with him,” L. Maynor said. “But I think the element of surprise is gone now and we would have to do something completely different to catch him off guard.”