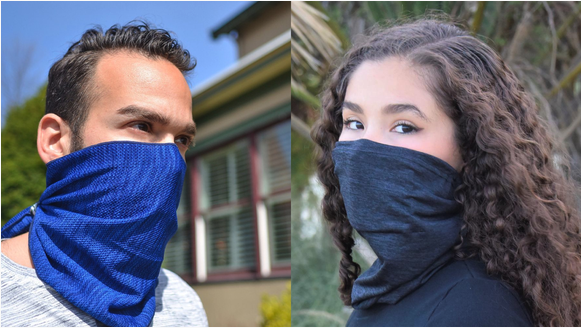 After working on giving out free masks in the Durham, N.C. area, Eric Westman needed to figure out which masks were the best case for providing protection against COVID-19. He teamed up with Martin Fischer, a chemist and physicist and they found that popular neck gaiters were almost completely ineffective in protection against the virus.

As director of the Advanced Light Imaging and Spectroscopy facility, Fischer normally focuses on exploring new optical contrast mechanisms for molecular imaging, but for this task, he MacGyvered a relatively inexpensive apparatus from common lab materials that can easily be purchased online. The setup consisted of a box, a laser, a lens, and a cell phone camera.

The novel coronavirus that causes COVID-19 is spread from person-to-person mostly through respiratory droplets that we all expel out of our mouths when we talk, sneeze, cough or breathe heavily, according to most experts.

In their experiment, an operator wears a face mask and speaks into the direction of an expanded laser beam inside a dark enclosure. Droplets that propagate through the laser beam scatter light, which is recorded with a cell phone camera. A simple computer algorithm is used to count the droplets in the video.

“We confirmed that when people speak, small droplets get expelled, so disease can be spread by talking, without coughing or sneezing,” Fischer said. “We could also see that some face coverings performed much better than others in blocking expelled particles.”

The two recorded control trials where the speaker wore no protective mask or covering. Each test was performed with the same protocol. The camera was used to record a video of approximately 40 seconds length to record droplets emitted while speaking. The first 10 seconds of the video serve as baseline. In the next 10 seconds, the mask wearer repeated the sentence “Stay healthy, people” five times, after which the camera kept recording for an additional 20 seconds. For each mask and for the control trial, this protocol was repeated 10 times.

They found that hand-made cotton face coverings provided good coverage, eliminating a substantial amount of the spray from normal speech.

On the other hand, bandanas and neck fleeces such as balaclavas didn’t block the droplets much at all.

“This was just a demonstration – more work is required to investigate variations in masks, speakers, and how people wear them – but it demonstrates that this sort of test could easily be conducted by businesses and others that are providing masks to their employees or patrons,” Fischer said.

There were a couple of limitations of the experiment that Westman and Fischer brought up.

“A first limitation is that our experimental implementation samples only a small part of the enclosure and hence some droplets that are transmitted through the masks might not be registered in the laser beam,” They said. “Similarly, the face of the speaker is positioned with respect to the speaker hole by aligning the forehead and chin to the box. The physiology of each speaker is different, resulting in variations of the position of the mouth relative to the light sheet. Hence, the droplet count reflects only a portion of all droplets, but as we perform the experiment with same initial conditions for all masks, the relative performance of the masks can be compared. A speaker hole that is sealed around the face would prevent the undetected escape of particles and ease comparison between different speakers.”

A second limitation is the use of the cell phone to record the smallest recognizable droplet size.

“The use of a cell phone camera poses certain limitations on detection sensitivity, i.e., the smallest recognizable droplet size,” They said. “To estimate the sensitivity, we consider the light that is scattered by droplets passing through the laser beam. The amount of light scattered into the camera direction depends on the wavelength of light, the refractive index of the droplet, and its size (and shape).”

Their main limitation was the low collection efficiency of the small camera aperture of the cell phone.

“We currently capture only 0.01 percent of the full solid angle,” They said. “An increased collection efficiency is possible with a larger relay lens in front of the camera, but this would come at the cost of a reduced field of view. The use of a single cell phone camera also limits the achievable size resolution, given the large field of view that is required to image as many droplets as possible. This makes it unfeasible to directly measure the size of small (aerosol) droplets in our setup. However, while we cannot measure the size of droplets at or below the pixel resolution, we can still detect and count the smaller droplets, down to the sensitivity limit described above. For very large particles, the limited dynamic range of the camera also poses a challenge for determining the size, since pixels easily saturate and hence distort the shape of the recorded droplet.

Even with the limitations, both agree that wearing a mask is the best way to reduce the spread of COVID-19.

“Wearing a mask is a simple and easy way to reduce the spread of COVID-19,” Westman said. “About half of infections are from people who don’t show symptoms, and often don’t know they’re infected. They can unknowingly spread the virus when they cough, sneeze and just talk.

“If everyone wore a mask, we could stop up to 99% of these droplets before they reach someone else,” Westman said. “In the absence of a vaccine or antiviral medicine, it’s the one proven way to protect others as well as yourself.”

Westman and Fischer said it’s important that businesses supplying masks to the public and employees have good information about the products they’re providing to assure the best protection possible.

“We wanted to develop a simple, low-cost method that we could share with others in the community to encourage the testing of materials, masks prototypes and fittings,” Fischer said. “The parts for the test apparatus are accessible and easy to assemble, and we’ve shown that they can provide helpful information about the effectiveness of masking.”

Westman said he put the information immediately to use: “We were trying to make a decision on what type of face-covering to purchase in volume, and little information was available on these new materials that were being used.”

The masks that he was about to purchase for the “Cover Durham” initiative?

“They were no good,” Westman said. “The notion that ‘anything is better than nothing’ didn’t hold true.”