STRAUGHN SHUTS OUT THE EAGLES 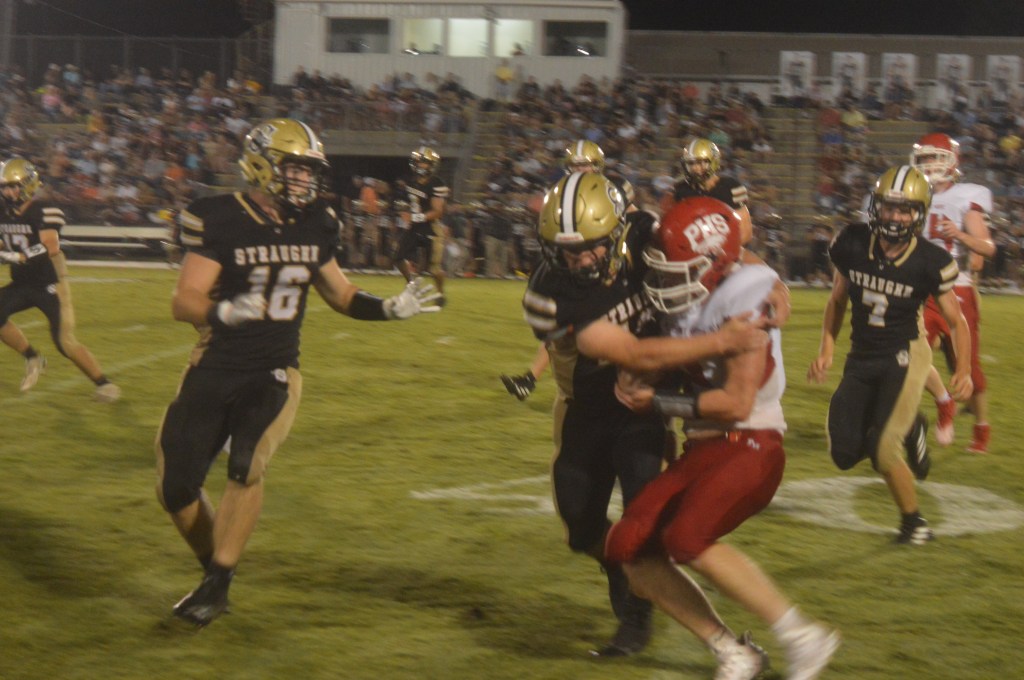 PHS head coach Richard Mercer said coming into the game he thought it would have a different outcome.

“We came into the game and we thought we had a shot to be able to possibly make it a 4 quarter game, but we just couldn’t get things going offensively,” Richard Mercer said. “They did a good job, they were better and we couldn’t pick it up and we are really young on the offensive line and that’s pretty tough stuff to take care of the first week, but we will get that stuff ironed out. We’re going to be better and we’re going to get back to work. That’s all we can do. I give my credit to Straughn and how hard they played. They wanted it more and they were the better team and we’ll be back.”

Mercer plans to work on fundamentals to prepare for next week’s game.

“It’s all about fundamentals and executing on Friday night,” Mercer said. “The kids have to know what to do, who to block, how to block and do it correctly and they didn’t do that tonight I don’t think, but we are going to learn a lot from our film study and we’ll be back. Defensively we made some stops and we made a couple turnovers, but offensively we couldn’t get it going. We couldn’t make a first down here and there and you can’t just do that and depend on your defense all night. It’s gonna wear down and that’s exactly what happened.”

“I thought we did a good job,” Straughn head coach Bradley Stephens said. “We came out hard and heavy in the first half running the ball and kind of mixing up some passing and I thought we did really well setting the tone early. In the third quarter, we kind of mellowed out a little bit. It’s like the jitters and adrenaline were over, so now you really gotta push through. In the third, we didn’t have the ball much so that was kinda tough, but in the fourth quarter we just kinda finished it off to get the win and that’s what we needed. I thought my quarterback, Mason, did a good job and he made a few checks that were at a good point during the game. My running back, Trey, he ran the ball hard and ran it well and I thought the third line did a good job. We’re kind of running thin now and we had a few guys step up when one of our guys went down tonight and another guy just filled right in. A lot of the guys did a good job just stepping up tonight.”

Looking forward to next week, Stephens said they have to work on coverage.

“We gotta work on a lot as far as defense and coverage goes, just keeping our keys in a standing position like we need to, and not getting too aggressive over kind of flying too much of the ball as much as staying home a little bit,” Stephens said. “Offensively we just have to get a little more healthy and we missed a few key blocks at times that I thought if we drive that out we’ll be in better shape. We had a few drop passes but not too many, so overall we still have the whole gamut and we’ll just continue working, it’s just the first week of the season.”

Straughn takes on Red Level at home next week at 7 p.m.

Pleasant Home takes on Flomaton at Flomaton next Friday night at 7 p.m.