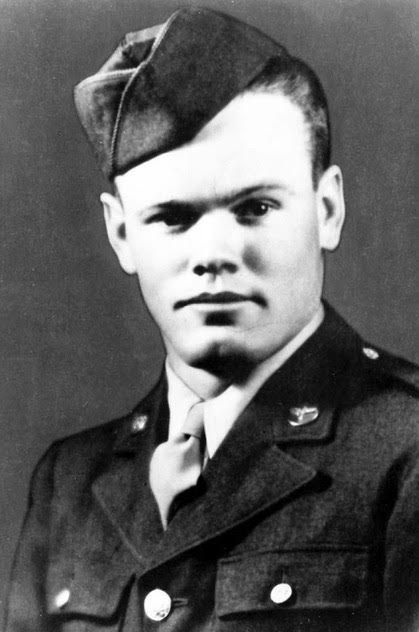 The timing of this week’s article coincides with the publication of a book on Aug 18, 2020. The book is a collaboration between Jon Erwin and William Doyle and is titled, “Beyond Valor – A World War II Story of Extraordinary Heroism, Sacrificial Love, and a Race Against Time.”

Henry Eugene “Red” Erwin was born in Adamsville, Ala., in 1921, and was the oldest child in the family. Gene, as his family called him, was only 10 years old when his father, a coal miner, died in the midst of the Depression. Times were tough and Gene took a part-time job working in the coal company’s commissary. Later, he attended high school but dropped out after two years in 1938, at the age of 17. Like so many other young men during the Depression, Gene joined the Civilian Conservation Corps. He was put in charge of 220 other young men planting kudzu. Our government actually planted kudzu to help stop soil erosion. After the CCC, Erwin worked in the steel mill for several years before joining the Army Reserves in July 1942. He was called to active duty in Feb. 1943. His test scores were high enough to qualify as an Aviation Cadet in the Army Air Force and he was sent to Taylor Field near Ocala, Fla. After washing out of flight training, Erwin was sent to Keesler Air Force Base for technical training. He completed advanced training as a radio operator and radio mechanic at Sioux Falls, South Dakota, and Madison, Wis.,, where he graduated in 1944, as a radio operator for the B-29 Super Fortress.

Before going overseas, Gene Erwin went back home to Alabama and married Martha Elizabeth [Betty] Starnes in December 1944. In January 1945, he was assigned to the 52nd Bombardment Squadron, 29th Bombardment Group, 20th Air Force in Dalhart, Texas. The unit would be sent to Guam in late Jan. 1945. Gene was assigned to a B-29 called The City of Los Angeles as the radio operator. His fellow crew members nicknamed him “Red” because of his red hair. Gene was stuck with that nickname the rest of his life. From Feb. 25 to April 1, they flew un-escorted bombing missions into the heart of Japan. Red had been promoted to Staff Sergeant and received two Air Medals for his service.

The next mission for The City of Los Angeles was on April 12. The group of bombers were to take off from Guam at about 2:00 a.m. and expect to arrive at the rendezvous point near the target around 9:30 a.m. They would be the lead bomber in a low level mission to attack a chemical plant at Koriyama, some 120 miles north of Tokyo. As lead bomber in the formation, they were to drop a phosphorus smoke bomb to signal the other aircraft to close formation for the attack. When they reached the rendezvous point, just south of the coast of Japan, the pilot, Capt. George Simeral, ordered the drop of the smoke bomb. Erwin had been given the job of dropping  the bomb, so he pulled a pin on the bomb, starting an eight second delay, and dropped it down a chute that was supposed to eject it below. For some unknown cause, the bomb went off prematurely and came back up the chute, hitting Erwin in the face, blinding him and burning off one ear and part of his nose. Smoke from the 1,100-degree white hot fire quickly filled the cockpit. Completely blind and fearing the bomb would burn through the metal floor into the bomb bay, Erwin managed to pick up the burning bomb. He crawled around the gun turret and headed for the cockpit, intent on throwing it out the nearest window by the copilot. His path was blocked by the navigator’s folding table, so he put the burning bomb between his bare right arm and his ribcage in order to have both hands free to raise the table and lock it in place out of the way. In the few seconds that this took, the phosphorus burned through his flesh to the bone. Now, almost completely on fire, Erwin managed to make it to the window and throw it away before collapsing between the pilots’ seats. With the cockpit cleared of smoke, Capt. Simeral was able to pull the plane out of a steep dive at 300 feet. The rest of the crew did not know what Erwin had done until the smoke had cleared. Capt. Simeral decided to turn back to Iwo Jima, the halfway point from Japan, where Erwin could be given emergency medical treatment. Simeral jettisoned his bombs while crew members used a fire extinguisher to put out the flames on Erwin’s clothes. With that done, the white phosphorus embedded in his flesh continued to burn while the crew tried to smother the burned area. They injected morphine and tried to inject plasma but his arms were burned so badly that it was difficult. Throughout the whole ordeal, Erwin remained conscious.

The plane was able to make a straight in approach when they arrived at Iwo Jima, and Erwin was taken to an underground hospital. He later recalled, “I remember going into this cave and this doctor was working on my eyes. I heard him say,  ‘We’ve got to get this phosphorus out of his eyes, otherwise, he’s going to be blind.’ ” The plane crew was able to visit with him briefly before heading back to Guam. Capt. Simeral was met by two officers after they had landed. After an inspection of the plane and a debriefing of the crew, the two officers started writing up a Medal of Honor recommendation. They rushed the recommendation quickly up through the chain of command. The assumption was that Erwin would not be alive very much longer. When he was still alive three days later, he was air-lifted to a Naval hospital on Guam.

The Commander of the XXI Bomber Command, Gen. Curtis Lemay, used the full force of his command to get the recommendation rushed through channels. Washington quickly approved the Medal of Honor in hopes of presenting it while Erwin was still alive. When they finally located a Medal of Honor to present, they had to break a display case at Army Headquarters at Honolulu. It was flown to Guam and awarded on Apr 19, 1945, only one week after the mission.

While still recuperating on May 7, Gen. Lemay asked Erwin if there was anything more they could do for him. Erwin asked to see his brother who was a Marine with the 7th Marine Division on Saipan. His brother, Howard Erwin, was flown to Guam by movie star Tyrone Power, who was a Marine Corps pilot. His brother spent a day with him before returning to Saipan. Red Erwin recalled, “I couldn’t see him but I knew he was there and that was a great comfort.”

Erwin’s condition was still grave and his weight had steadily dropped. He remembered, “I got down to 87 pounds, skin and bones, because I couldn’t open my mouth to eat …I didn’t give up…they kept me soaked in saline solution so what little flesh I had wouldn’t come off.”

Finally, he was well enough to be airlifted back to the States, landing at Sacramento, Cali. Over the next 30 months, Erwin would undergo 41 surgeries. When the last surgery was over, he had regained most of his eyesight and the use of one arm. By then, it was Oct. 1947 and Red Erwin was tired and weary. He said, “They still wanted to do more surgery, but at that time I had had it. I was married. I wanted to go home and go to work.” At that time, he was discharged from the Army as a Master Sergeant with full medical disability. Erwin had this to say about his discharge, “I love the military. Even though I was severely burned, if they had retained me, I would have stayed in.”

Erwin went to work for the Veterans Administration in Jan 1948 as a veteran’s benefits counselor. He worked there for 37 years, retiring in 1984 with more than 43 years of federal service.

He stayed in touch with the crew of The City of Los Angeles, all of whom had survived the war. In 1989, Erwin and his pilot, Simeral [who had retired a  colonel] were interviewed in a video titled “Prepared to Die, “ which was produced by the Air Force Sergeant’s Association’s Airmen Memorial Museum.