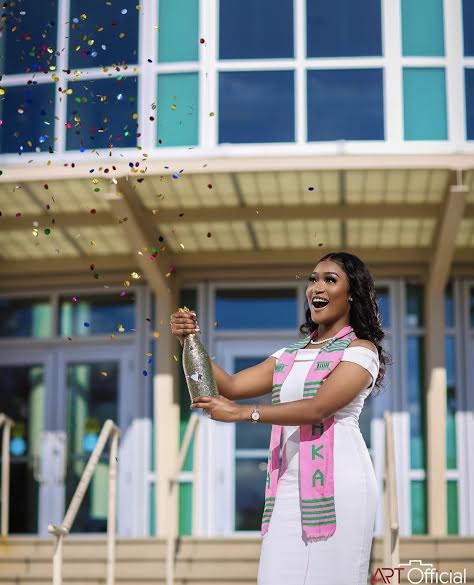 Andalusia High School alumna Quatasia Wheeler is one step closer to her dream career. After years of preparation, Wheeler has been accepted into the top occupational therapy school in the state at the University of Alabama at Birmingham.

After high school, Wheeler attended Lurleen B Wallace Community College and recently graduated from the University of South Alabama.

Wheeler’s journey to becoming an OT began when she was a freshman in high school after a family member was recommended occupational therapy.

“When I was in the ninth grade, my grandfather actually had a stroke. I didn’t know what it was at the time and I talked to my grandmother about it and she didn’t know what was going on either,” Wheeler said. “The doctor prescribed occupational therapy and it was meant to assist him with his daily activities and basically to restore his mobility after his stroke to get him back into doing what he did on a daily basis. At that point, I thought it was interesting.”

“I learned about the program while at South and looked at my options and where I would need to go if I wanted to take it seriously,” Wheeler said. “I found a work-study job as a physical therapist instead of an occupational therapist. With that, I made connections with the OT since we were in the same office. I worked as a PT but networked with an OT and helped me get affiliated with the program.”

Wheeler’s support system is wide, consisting of her family, friends, and church family. She credits her grandmother for giving her advice throughout her life.

“My grandmother, who is one of my most vocal supporters, always told me if you work now you can play later. It has stuck with me every time I start a process and get tired or frustrated. I attribute a lot of that support to my family, friends, church family and of course God,” Wheeler said. “They all play a role in my current success.”

The application process for the occupational therapy program was tedious, according to Wheeler. It consisted of interviews, education requirements, recommendation letters, and other prerequisites for being eligible to apply.

“When I found out I got an interview at UAB and at ASU I was like, ‘Wait, me?’ I felt grateful. UAB had such a family dynamic and that automatically attached to me,” Wheeler said. “Long story short, I found out I got in and I was so elated I didn’t know what to do. At that point, it didn’t matter what people said or the statistics, because you know I did the work and it paid off and now it’s time to do more work then I’ll get to play. I was so grateful to God and to this moment I’m overwhelmed.”

Wheeler explained that the interview process commenced after two days, allowing the university to narrow applicants down from 400 students to 195. Wheeler was one of 60 interviewees that were accepted into the OT program at UAB.

“I went in feeling kind of apprehensive about what I should or shouldn’t say or should I know this or that,” Wheeler said. “They literally were like, ‘this is going to be like a conversation,

don’t be nervous, you just go in and let them know this is who I am, what I’m about, and why I’m a good fit for the program.’ I appreciated it.”

Wheeler felt a strong connection to UAB after her interview experience. Throughout the process, she was able to unravel and identify qualities of the university that she adored.

“I’m aspiring to be in a field where I am a minority and they incorporate the difference. They treated the interview like a conversation and they asked me about a diversity quote and how I felt about it. They made me feel equal and this doesn’t stop at the program. It goes beyond the program and throughout the school,” Wheeler said. “It’s important to be around people who aren’t like-minded like you to prolong your knowledge. The real world is full of all kinds of people. They stood firmly on being diverse and being able to expand upon that.”

Wheeler applied and interviewed at Alabama State University as well before ultimately deciding to attend UAB.

“Starting out, I didn’t know what school I wanted to go to. I just wanted to apply everywhere and kind of let the chips fall where they may. This contributed to my experience at South. One of my mentors graduated from UAB and she said I had the credentials to go wherever I wanted but said to go where is best for me. I felt like UAB had so much opportunity and they are already a prestigious college, but at that point, it’s like do you want to be comfortable or grow because you can’t do both,” Wheeler said. “South is a great school, but I know me and I want the best. ASU is a great price and school as well, but UAB is my dream school. This is the top OT school in the state.”

Wheeler feels grateful to have the opportunity to study at a university as prestigious as UAB before the program is moved to the doctorate level. During the program, Wheeler will gain experience both inside and outside of the classroom, and eventually beyond the state of Alabama.

“Next year UAB is turning into a doctorate program, so this is the last group of majors. My first year, we are doing course work in class and my second year will be in the field. Sometimes they are out of state, so you’re not always in the comfort of your home and hometown because you have to be adaptable and you’re making connections. It is important because you can come back to this state if you would like to or you can go to another state where you made a connection.”