A vast trail of public improvements for Alabama was disclosed in October 1941 in a report published in The Andalusia Star. These projects performed by the W. P. A. (Works Projects Administration) during the Great Depression included a period from July 1935 to July 1941. The report lists public buildings construction; public utilities and sanitation; highways, roads, streets, and bridges; recreational facilities; and a large list of accomplishments in the fields of health, education, and other community services.

The W. P. A. was an American New Deal agency employing millions of job-seekers to carry out public works projects including the construction of public buildings and roads. It was established on May 6, 1935 by Executive Order 7034 of President Franklin D. Roosevelt. It employed more than 8.5 million people on 1.4 million public projects before it was disbanded in 1943.

“Alabama now has 714 new public buildings constructed by the W. P. A. These buildings include some of the state’s largest and most beautiful structures such as the Highway Department building and the State Archives and History building in Montgomery as well as the new Andalusia High School building at the end of Third Avenue completed just before the fall school year of 1939.”

The January 5, 1939 edition of The Andalusia Star reported, “Workmen and contractors have completed the foundation to the Andalusia High School. The building will begin to take shape hurriedly according to W. N. Rushton, head of the Andalusia Development Company, which concern was awarded the contract for the construction. The sub-flooring has been put down and work on placing the window frames is underway.”

“The Andalusia Manufacturing Company was awarded sub-contract for all electrical and heating work as well as plumbing. The boilers for heating have been placed and approximately 40 workmen are employed on the project which contract calls for its completion August 1. When completed the building will be judged among the best and most modern in the state according to Superintendent  C. L. Martin. The stage in the gymnasium-auditorium will be far bigger than any other stage or auditorium in Andalusia. The Andalusia Brick Company was awarded the contract for brick to go in the building.”

May 30, 1940 – “After having listened in at the radio news broadcasts telling of the British and French soldiers fighting by the side of the Belgians, we went to the High School Auditorium to sit in on the commencement exercises held in honor of the sixty-two young men and women who make up the 1940 senior class where we found a most pleasurable diversion.”

“We saw evidence of the faith and hope and courage of our own people as these were manifest in the planning done to make of this occasion a memorable one for the members of this, the largest class in our city’s history. We saw the young  men and women march in, wearing cap and gown, each with a confident step and buoyant hope. We later saw the class representatives perform on the stage – each one bringing to the audience a message from youth. In each message there was that assuring note of optimism, an evident assurance that there are still the best things to come and that with them ‘hope sees a bright star ahead.’”

“Then the thought came to us that these young men and women, our leadership of tomorrow, typify America – in preparation for the tasks that lie ahead.”

“Miss Inez Riley, the class president presided. Miss Rachel Johnson was class historian and Charles Martin, the class prophet. The class will was written by Henry Ford Turner and Max Foreman was the generous giftorian. The new high school witnessed its first commencement with the Class of 1940.”

If we look back to May 1940, much had been written in the local newspaper about an approaching “second world war.” The Japanese attack at Pearl Harbor had not even happened yet. Many AHS graduates later served in World War II as evidenced by the memorial plaque in the entrance foyer at AHS.

My mother Marjorie Brunson was a graduate of the AHS Class of 1941, the second class to be graduated from the new high school. I have some mementoes of hers which include a senior scrapbook, her class ring, and her yearbook, the Memolusia. Pearl Harbor had not even happened then in May of 1941. In those treasured items she kept, I found a letter she received from 1940 graduate, classmate, and great friend Max Foreman when he was stationed in a war zone. A black marker had crossed out certain words and lines in the letter which showed that the letter was read by the military, censored, and deemed to contain confidential information.

December 19, 1940 –“Andalusia High School is to have a standardized ring for the next five years. By this, it is meant that the class ring will remain unchanged except for the date of graduation. This was the ambition of the Senior Class who were responsible for the overwhelming vote in favor of this project.”

School is now back in fall session in this high school building built eighty years ago. It is still one of the most beautiful school buildings in the state. There are even some newer versions of the design of the AHS building – for example, Saraland High School that can be viewed off the interstate when “motoring” to Mobile.

Do any of you readers REMEMBER WHEN an editor used that term in the local newspaper in the 1950s and 60s? Yes, that was Andalusia Star News Editor Ed Dannelly!  If one “drove” to Montgomery for surgery, he “trekked.” If he “drove” south to Pensacola to visit relatives, he “motored.”

October 30, 1941 – “Football Game Friday Night – The Andalusia Bulldogs will be host to Enterprise here Friday night. This will be the first game to be played on the new field behind the High School building. The games played here the first of the season were staged at the Fair Ground Park (Sanford Road). The kick-off will be at eight o’clock.”

The Andalusia Memorial Stadium was not even built until 1950. As I may have written before in this column, the late Mr. Reid Merrill of Andalusia Manufacturing Company told me that there was a cave in the area where the stadium was built. A family who actually lived there during the Depression had to relocate! That is a true story!

The 1939-40 pictures of the new school show the driveway on the west side. The driveway today is on the east side. Just thought you readers would enjoy seeing these old photos so we can appreciate the work that continued by the leadership of the Andalusia City Schools in the addition of other buildings in later years on the campus. 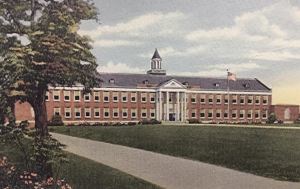