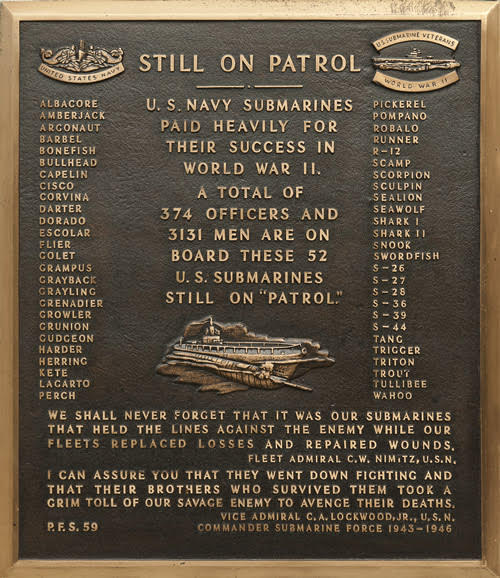 It has been a high privilege and honor to have known so many of those WW II veterans that Tom Brokaw proclaimed as The Greatest Generation. They are leaving us all too quickly. Their memories and exploits should be forever recorded and honored by our nation. When these  heroes speak, almost without fail, they say that “we’re not the heroes. The heroes are those that didn’t come home.”  In today’s article, we would like to salute some of those brave men lost right at the end of the war.

There is a monument in India which honors the British soldiers who fell in the Battle of Kohima in 1944. It speaks for those men lost in that battle but it loudly speaks for all those young men and women lost in all the battles fought against the Axis powers in WW II.

“When you go home, tell them of us and say,

For your tomorrow, we gave our today”

Some of the last casualties in the Pacific war with Japan seem particularly sad. The tragic sinking of the USS Indianapolis  [CA-35] on July 30, 1945, resulted in the largest loss of life in the history of the United States Navy. The Imperial Japanese Navy submarine I-58 torpedoed the heavy cruiser causing her to sink in 12 minutes. Three hundrerd of her crew went down with the ship. The remaining 890 of her crew were adrift in the Pacific for four days, fighting exposure, dehydration and shark attacks. Only 316 men were finally rescued. There is great irony in the tragic loss of the Indianapolis. The cruiser had just completed a top-secret mission in which she delivered  parts of the U.S. nuclear bomb, Little Boy to the island of Tinian. She was sunk as she left Tinian enroute to the Philippines. What if I-58 had sunk the Indianapolis before she delivered the bomb parts to Tinian?

Emperor Hirohito broadcast his surrender announcement to his nation at noon [local time] on August 15. Earlier that morning, US Navy Adm. William F. Halsey had dispatched four Navy F6F Hellcat fighters to attack the Tokyo area, in an effort to keep the pressure on during the surrender negotiations. Sometime during their flight, Halsey received word that Japan had officially accepted the terms of surrender. He immediately sent out a re-call order. The fighters turned around but they were jumped on their way back to the carriers and shot down. Those four Naval aviators were recorded as the last battle casualties of WW II. Adm. Halsey felt great guilt since he had issued the orders for their mission. He recorded the names of these four men in his memoirs and asked that they never be forgotten. We list them here:

The last Navy Destroyer Escort was lost on July 24, 1945. USS Underhill [DE-682] was attacked by a Kaiten, a “suicide torpedo,” from the Japanese submarine I-53. Underhill quickly went down with 113 of her crew, including the commanding officer, Lcdr. Robert M. Newcomb.

The last Navy Destroyer was lost on July 29, 1945. USS Callaghan [DD-792] was attacked by a Japanese “Willow” biplane and hit with a 220- pound bomb. The bomb hit a critical area and set off a magazine locker holding 5- inch shells. The resulting explosion caused the Callaghan to sink quickly, taking 47 of her crew with her.

The last Navy Submarine was lost on August 6, 1945. USS Bullhead [SS-332] was sunk by Japanese aircraft off the island of Bali, with the loss of her 84- man crew. Bullhead was the last of 52 US submarines lost during WW II. The US Submarine Memorial at Pearl Harbor honors the 3,505 submariners who never returned. They are listed as “still on patrol.”

The last Kamikaze attack took place on August 13, 1945. The Navy troop carrier, USS Lagrange [APA-124], was attacked by two Kamikazes in an anchorage off Okinawa. The Lagrange survived, but 21 of her men died and another 89 were wounded.

The last US combat casualty was Sgt. Anthony Marchione, who died on August 18, 1945. Sgt. Marchione was a crewman aboard a B-32 reconnaissance aircraft when it was attacked by Japanese fighter planes. This happened three days after the cease fire had taken effect.

Finally, the last Navy ship sunk was the USS Minivet [AM-371], a minesweeper that struck a mine while clearing mines in the Tsushima Strait on December 29, 1945. Thirty-one of her crew were lost.