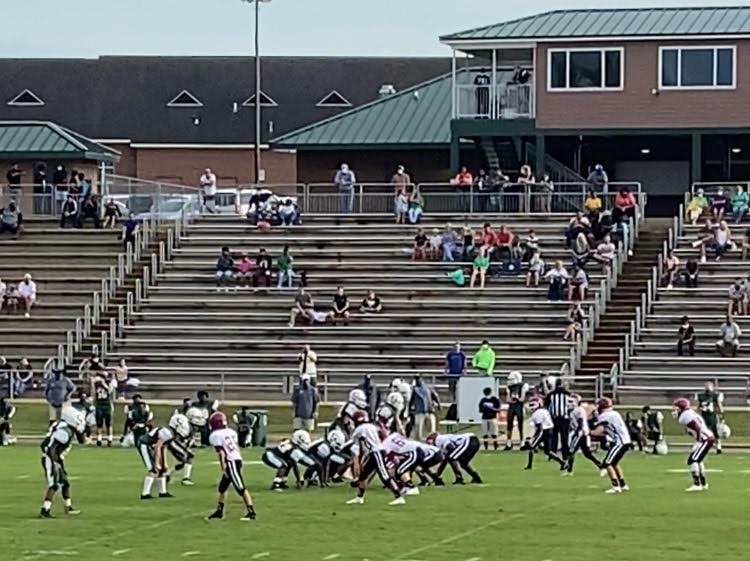 Last Thursday night, the AJHS Bulldogs began their 2020-2021 campaign on the road versus the Coppinville Eagles. A large contingent of the Bulldog faithful followed these young men to Enterprise and cheered them on until the final whistle. Although the final score, a 12-0 defeat to the Eagles, was less that desired, the 8th grade Bulldogs showed their fight and their toughness.

Most of the game was a battle of field position between the Bulldogs and the Eagles. Each team took turns moving the ball up the field before drives bogged down and they had to punt. Scoring was limited to two plays for the Eagles. On the last play of the first half, the Eagles QB #2, threw a wing and prayer 23-yard pass toward the end zone that miraculously went thru the hands of a couple Bulldog defenders for a TD (PAT failed). The other score for the Eagles came in the second half on a 40 yard TD scamper by #3, who was also their leading rusher (6 rushes for 62 yards).

“Looking at the scoreboard, the outcome of the game was not what we had hoped for,” said Head Coach John Dugger. “We made our fair share of mistakes and we will learn from them and get better. Now is the time to look forward and to move forward. You don’t improve when you only look back.”

The Bulldogs attack was led by #2, Zade Newton. He accounted for 71 yards rushes on 15 attempts. Calvin Daniel, #3, the Bulldogs QB had 5 completions for 29 yards. Leading receiver, Jacob Sellers, #35, had three receptions for 17 yards.

On the defensive side, the Bulldogs’ charge was led by Zerrick Jones, #13. He accounted for 6.5 tackles including a big hit that stopped a late TD. Other leading tacklers were: Jacob Sellers, #35, with 5.5 tackles and Riley Tucker, #36, with 3.5 tackles.

The AJHS 7th grade Bulldogs saw their first action of the season as well. It was a defensive struggle vs the Eagles and ended in 0-0 tie. The game was sealed by an incredible interception and long return by Keilan Davis, #12 as time expired.

“I was pleased with our 7th-grade bunch. Saw some fight and fire out of this group. We look forward to their continued development,” said Coach Dugger.

The AJHS Bulldogs will have their home opener this Thursday night vs. the Charles Henderson Middle School Trojans. Kickoff will be at 6 pm at AHS. Come support your AJHS Bulldogs.