REMEMBER WHEN: Andalusians celebrate victory in the Pacific 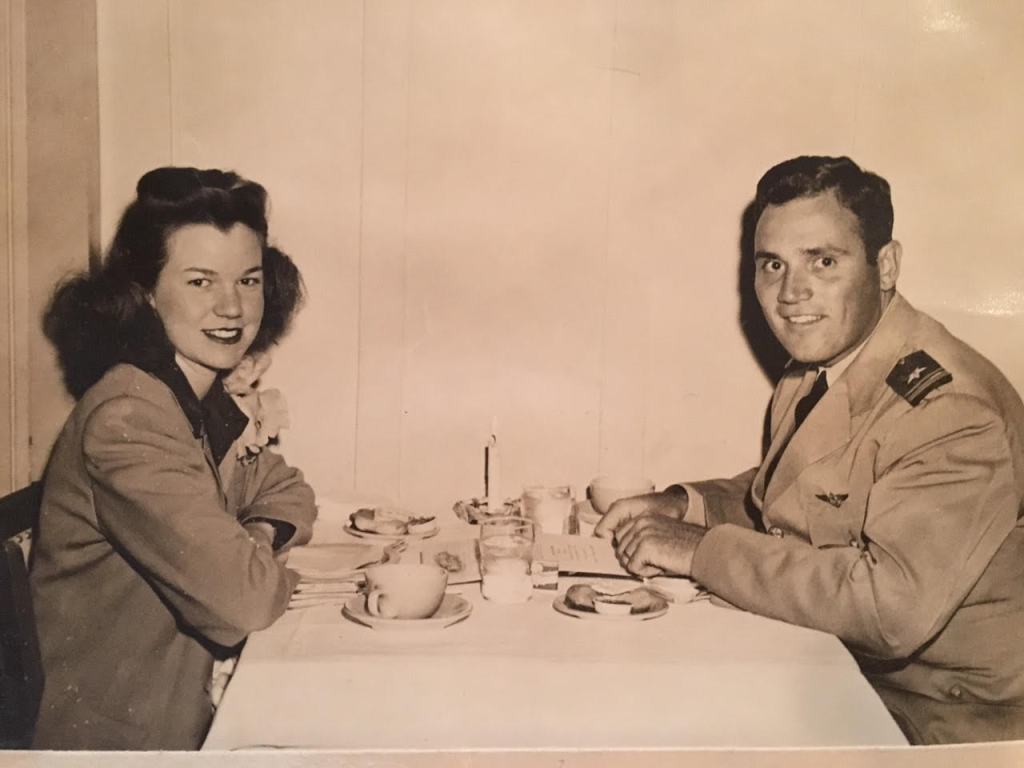 and V-J Day, this column is dedicated to all of those Andalusians and Covington Countians who served in the Pacific Theatre of operations in that era of 1945.

The headlines in the August 23, 1945 edition of The Andalusia Star reads: “Japanese To Surrender On Battleship USS Missouri In Tokyo Bay, August 31st. – Japan’s surrender will be signed aboard the Battleship Missouri in Tokyo Bay, August 31, General Douglas McArthur announced today. It was the first official word on the site of the signing. The 45,000 ton battleship participated with Admiral Halsey’s Third Fleet last month in bombarding Japan.”

“Washington authorities announce that we will have two and one-half million radios by Christmas and that the ladies will have nylons by Thanksgiving. Businessmen are told to build all the new plants they can.”

“The Japanese emperor and press have told the Japanese people that they must accept the cold fact that Japan is a conquered nation and that her people must endure a hard peace. The first occupation force to occupy Japan will be flown in. The number will total some twenty thousand. The end of rationing is promised within six months. Don’t destroy your ration books yet.”

The Andalusia Star, August 30, 1945 – “The first thought of every American man or woman about ‘V-J Day’ should be this – that we have not only won a great victory, but we have had a incalculably great deliverance. We may not have won heaven but almost we have escaped hell. Hence the thing we should most thank God for is for the greatness of our deliverance.”

“The greatest mistake we average Americans can make is to say to ourselves, ‘Well, we have won.’ We did not win the victory, and God pity us if we treat it as if we did. The victory was won by a quarter million select Americans who died in agony on land and sea in our stead…and by the sacrifices made in their families saddened by the loss of unreturning husbands, sons and brothers cut off in the bloom of youth and  promise…and won by another three-quarter million young Americans maimed, wounded, or imprisoned…and by countless others who have suffered in mind or body in hospitals far from home and loved ones.”

The Montgomery Advertiser, September 2, 1945 – “IT’S V-J DAY TODAY SAYS PROCLAMATION – President Harry Truman tonight (September 1) proclaimed the end of mankind’s bloodiest war and the beginning of an era of world peace and prosperity secured of fruition by the same free skill and energy which produced the atomic bomb. In a radio broadcast following Japan’s unconditional surrender, the president said, ‘As President of the United States, I proclaim Sunday, September 2, 1945 to be V-J Day, the day of formal surrender by Japan. It is not yet the day for the formal proclamation of the end of the war or of the cessation of hostilities, but it is a day which we Americans shall always remember as a day of retribution as we remember that other day (December 7, 1941), the day of infamy.’”

The Andalusia Star, September 6, 1945 – “Aboard the USS Missouri in Tokyo Bay, Andalusians are playing a role in the momentous event of American history. Serving on this mighty battleship, these men were present when the Japanese envoys came aboard to sign the final surrender document – Woodrow Wilson Garrett, coxswain, USN, Route 5, Andalusia, and Alex Tompkins, boatswain, 3rd Class, USNR, of 310 Woodrow Avenue, Andalusia. Other famous American military and naval chiefs were present including General of the Army, Douglas McArthur, Supreme Allied Commander and Fleet Admiral Chester W. Nimitz, Commander-in-Chief of the Pacific Fleet, who signed the document for the United States.”

“The Missouri named for the home state of President Truman, is one of the most powerful warships ever built. It is now the flagship of Admiral William F. Halsey, Commander of the Third Fleet.”

My father, Lt (j.g.) Charles C. Bass, Jr. was stationed at the time at the Alameda N.A.S. (Naval Air Station) in San Francisco, California. He flew with the N.A.T.S. (Naval Air Transport Service), Squadron VR-11, back and forth from Honolulu to the various islands in the South Pacific down to Australia as the war raged delivering blood, medical supplies, and transporting wounded to nearby hospitals. The flight crews would return to Alameda every six weeks for a few days then out again.

The Navy pilots’ wives lived in a former fraternity house (2434 Piedmont Ave., Berkley, California) where they cooked and socialized together while trying to maintain a life waiting for their husbands to return and hoping for the end of the war. The young ladies shared with each other stories about their hometowns and their families. Some of them held jobs in San Fran. On occasions they read excerpts from letters they received by “red tag” mail from their husbands and, most importantly, encouraged each other as they listened to daily radio broadcasts and obtained other Navy news.

My mother Marge Brunson Bass was one of the Navy wives

who had accompanied my father from the Pensacola N.A.S. where he had gotten his wings and been an instructor prior to being stationed at Alameda. They were looking forward to celebrating their first anniversary on August 25, 1945 hoping he would return to the states by that date. Thankfully, it did happen. They celebrated a memorable evening at the Hotel Claremont in Berkley high on a hill where the Russ Morgan orchestra was playing all the “big band” music of the day.

This week, since this 75th anniversary of V-J Day was approaching, I pulled out that stack of letters my mother wrote to my father when he was away on those treacherous missions.

August 13, 1945 – “Charlie, last night we heard over the radio that Japan had accepted our peace terms. We all screamed so loud, everyone 10 blocks away heard us. I’m listening to the radio (again) tonight and am enjoying it, but these songs they’re singing make me miss you so much. Heard the president announce V-J Day, and on the same program, they had (Bing) Crosby, (Frank) Sinatra, Frances Langford, and Bob Hope. Then some chaplain said a beautiful prayer. I wish you could have heard it. Maybe (where you are) you did.”

In another letter over in October, she wrote, “The other day someone in town approached me and said, ‘You have a Southern accent just like someone I used to date in Andalusia, Alabama.’ Marge replied, ‘Well, believe it or not, I am from Andalusia, Alabama. What was his name?’ The young woman stated, ‘Johnny Plummer.’ Marge said, ‘I know him. He is married now!’ After that, she wrote in the letter, ‘I guess the Andalusia, Alabama people are all over the world now with this war!’

“‘WE’ got your $300. mustering out pay besides your bonus and our travel pay. You have 42 ½ points now which will help maybe with your early release. Maybe we’ll be home for Christmas! I am not going home without you. My parents have added two rooms to their house so we’ll have plenty of room to rest and recuperate after our drive across the country.”

Mother rarely missed a day writing a lengthy letter to Daddy. Her responsibility while he was away included keeping an old Mercury automobile in repair that always seemed to be in need of regular maintenance (batteries and tires); having his uniforms cleaned and pressed and buttons sewed on for his next arrival; working as a typist of policies for an insurance company; balancing the checkbook and paying their few bills; learning new recipes and techniques of cooking with the other wives; caring for her own wardrobe and hairdo; and writing and reading letters from home and from her “honey!”

Just to make sure you readers have a clear picture, just a year ago in June 1944 prior to her meeting Navy pilot Charlie Bass on the steps of the old First Baptist Church in downtown Andalusia, she was the 21-year old “jitterbug queen” in town and a student at Huntingdon College majoring in English. Then just a little over a year later, she had a young husband in a war zone trying to assist him in every way possible. In those letters, she continued to talk about their future, their dreams, their hopes for a family, and their plans for a home together.

One sentence stood out to me when I saw these words she wrote, “I will save all of our letters and Kodak pictures we take out here (California) along with these experiences and memories so one day we can tell and show our children and REMEMBER WHEN…..!”

(If anyone reading this story knows of the families of Woodrow Wilson Garrett or Alex Tompkins or any other Covington Countian who served on the Missiouri and who witnessed the signing of the surrender, please let me or the Covington Veterans Foundation know. Veteran banners will once again be displayed around Veterans Day on the main streets of the county seat. If you wish to purchase one for your family veteran, contact Michele Gerlach at the Andalusia City Hall in September since orders have to be placed early. Look for upcoming publicity.) 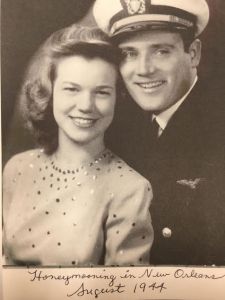