War’s End, Part 2: The Formal Surrender of Japan, Dedicated to all members of The Greatest Generation 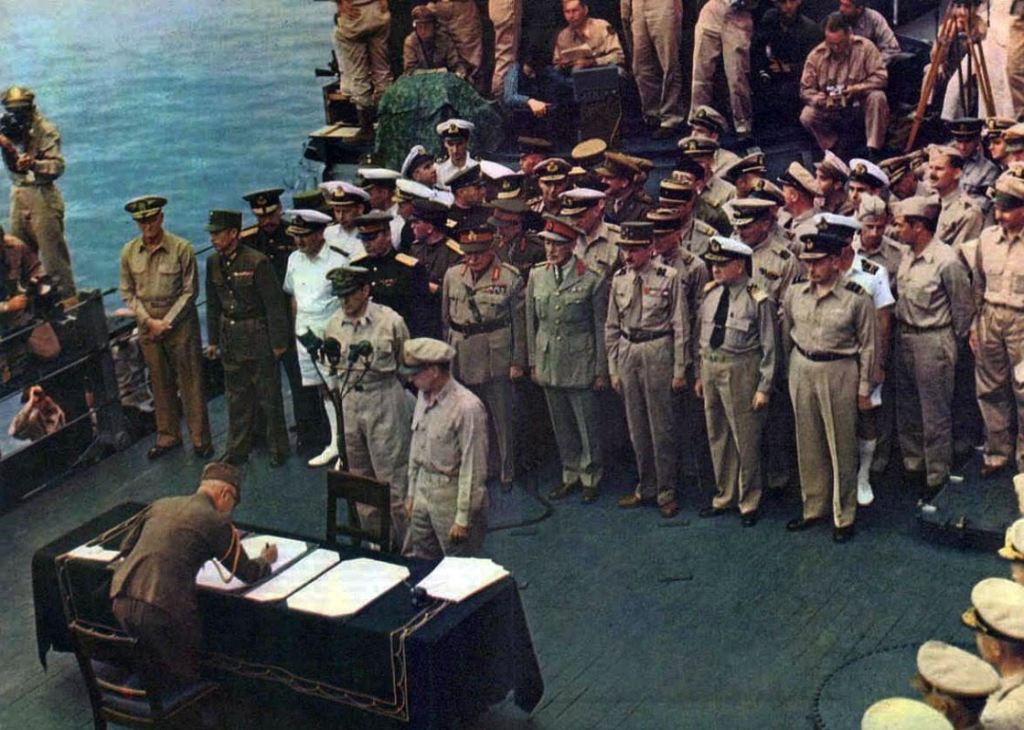 September 2,, 2020, marked the 75th anniversary of Japan’s formal surrender, ending WW II. The historic ceremony was held aboard the battleship USS Missouri [BB-53], anchored in Tokyo Bay. She was surrounded by several hundred Allied ships. Throughout the world, there was tremendous relief, but the greatest relief came from the Allied troops who had been preparing for the invasion of Japan.

The Instrument of Surrender had been prepared by the War Department and approved by President Harry Truman. In some eight short paragraphs, it laid out Japan’s capitulation. It began “We, acting by command of and in behalf of the Emperor of Japan…” The wording drafted by the United States gave emphasis to “in behalf of the Emperor,” The Emperor’s role had been important in bringing about the final agreement of “unconditional surrender,” and it would play an equally important role of the peaceful occupation of Japan.

The second paragraph was the most important: “We hereby proclaim the unconditional surrender to the Allied Powers of the Japanese Imperial General Headquarters and of all Japanese armed forces and all armed forces under Japanese control wherever situated.”

The entire signing ceremony would last about 23 minutes. Supreme Allied Commander Gen. Douglas MacArthur began the ceremony, “We are gathered here, representatives of the major warring powers to conclude a solemn agreement whereby peace may be restored.” He continued reading, “It is my earnest hope, and indeed the hope of all mankind, that from this solemn occasion a better world shall emerge out of the blood and carnage of the past, a world founded upon faith and understanding, a world dedicated to the dignity of man and the fulfillment of his most cherished wish for freedom, tolerance and justice.”

Gen. Percival had been forced to surrender British held Singapore to the Japanese in February 1942. Gen. Wainwright had been forced to surrender U.S. held Corregidor [in the Philippines] to Japan in May 1942. Both men had been taken to a special camp at Hsian in Japanese-occupied Manchuria. The two men had just been freed a few weeks before the surrender ceremony. They were both emaciated. Gen. Wainwright would later be awarded The Congressional Medal of Honor  by President Truman.

Gen. MacArthur signed the documents with a flourish and signed five times with five different pens. He kept one pen for himself, gave another to the U.S. Military Academy, gave one to the U.S. Naval Academy and gave the remaining two to Gen. Percival and Gen. Wainwright

As the ceremony came to a close, the Missouri was overflown by more than 900 U.S. military aircraft.

There could be no doubt among the Japanese military leaders as to the wisdom of their decision to surrender.