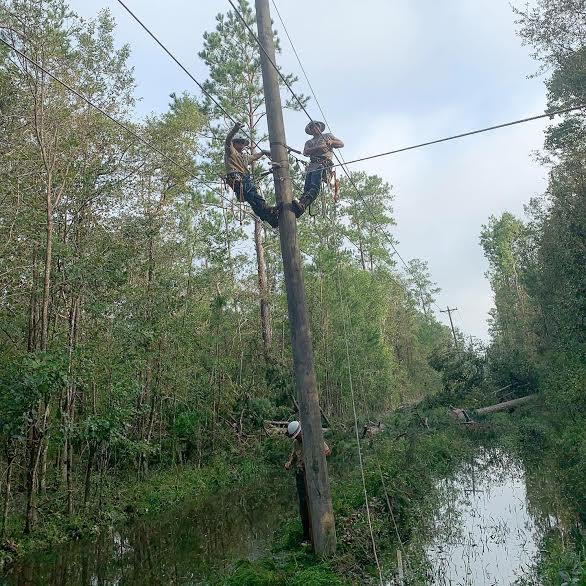 As progress continues in the massive power restoration effort following Hurricane Laura’s devasting impact on south Louisiana, Covington Electric Cooperative will be rotating its line crews assisting Beauregard Electric Cooperative later this week. The first crew that went to BECI on Aug. 29 will return home this Friday, while a second crew will travel to Louisiana on the same day.

As of Sept. 8, power has been restored to roughly 10,000 of the 43,000 BECI meters with the help of approximately 1,100 line workers and right-of-way crews from multiple states. BECI’s power provider has restored service to half of its 22 substations. Full restoration is expected to take another three weeks, but some areas with heavy damage may wait longer for power to be restored.

CEC Vice President of Operations Bert Champion briefed the CEC crews on what they can expect when they arrive at BECI. “We share information about damage assessments, progress reports, working conditions, hazards, etc.,” said Champion. “Safety is the top priority in these situations and it’s absolutely critical that everyone keep their minds on what they’re doing. They understand the importance of following every standard operating procedure even when thousands of people are without power because those safety protocols are what saves lives. It’s been extremely hot in Louisiana with high humidity, so the working conditions are very uncomfortable. We’re used to that in south Alabama, but there are also a lot of marshy areas in the BECI service area that are not accessible with a bucket truck. These areas are known habitats for snakes and alligators that can potentially be more than a nuisance if you’re not careful. We encourage our workers to always be observant in their surroundings and remember the safety protocols at all times,” said Champion.

“Neighbors Helping Neighbors” has always been the co-op way and the positive impact of this long-standing commitment is never more apparent than during the aftermath of a natural disaster. Louisiana co-ops sent several crews to assist CEC after Hurricane Opal devastated our area in 1995. “When co-ops get knocked down by Mother Nature, we come together in a unified effort to rebuild the grid and restore power to the people. It’s quite remarkable and CEC is very proud to be part of this unique alliance,” added Champion.