Remembering Logan: RLHS students speak about how much Logan Melvin meant to them 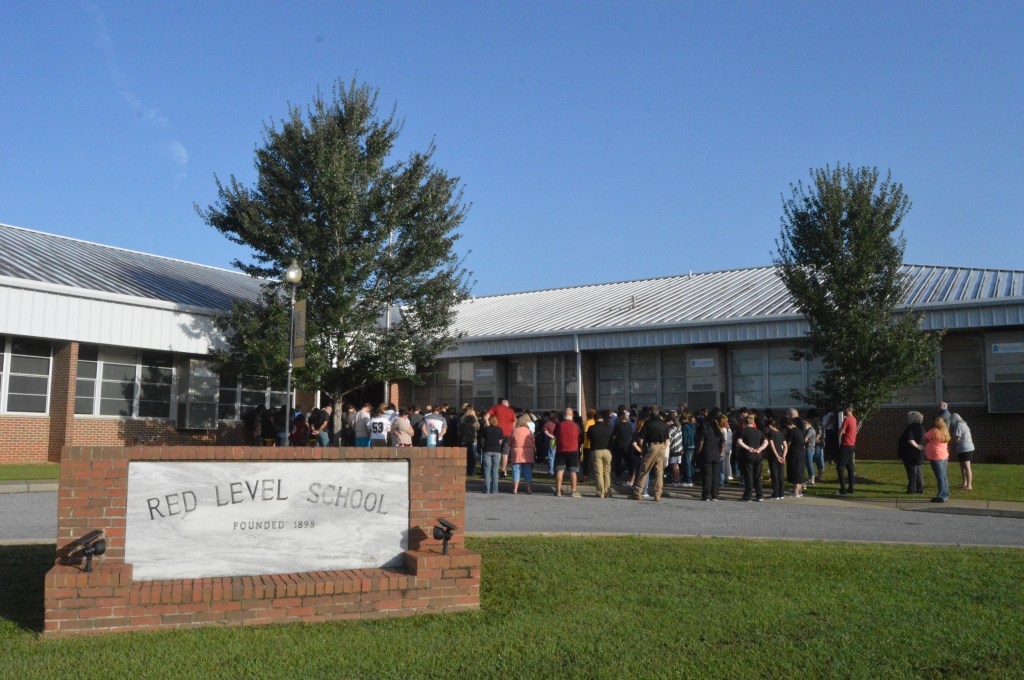 The Red Level community pulled through another tragic event last week by holding a prayer at the pole for student Logan Melvin. Several students explained what exactly Logan meant to them, describing him as kind, selfless, smart, and spontaneous.

Classmate and friend Kinsey Gomillion struggled to land on only one memory of Logan to share, beginning when she first met Logan in the fifth grade. “There are so many memories I have with Logan, it’s hard to pick just a few. When he came to Red Level, I want to think we were in fifth grade. I was a quiet kid and I didn’t have very many friends. He obviously had just gotten here and really didn’t have anyone either, so we hit it off pretty well,” Gomillion said. “Both of us, as we got older, became more outward and open towards people. If one of us had a problem, we got through it together.”

“I remember when he moved to Alberta. I cried for days over him leaving, and when he came back, I was just overjoyed. He was walking around the hallways just the other day with his bike helmet on, because he wanted to, and it made people laugh. That’s who he was. He wanted to make all of us smile,” Gomillion said. “When we’d argue, it was like two brick walls fussing at each other. Arguments always ended with us laughing at our own stupidity or making fun of how pointless the argument was. Both of us were just as stubborn as the other so arguing never got anywhere.”

Gomillion expressed her adoration for her friend, Melvin, describing him as spontaneous.

“If one of us had an idea, it didn’t matter how bad it was, the other was on board immediately. We didn’t know how to say ‘well, what if we get in trouble?’ or ‘that sounds like a bad idea, man.’ It was always ‘that’s a horrible idea. Grab your stuff, we’re gonna do it.’ He was telling me the other day, after he’d moved to the other class, ‘man, it’s so quiet without you in there. I miss having class with you guys!’ He was such a good friend,” Gomillion said. “He may be gone now, but he’s always been a part of us, and he’ll always be a part of us.”

Jacob Parker described Melvin as a selfless and caring friend. Due to this, he was quickly accepted into his friend group, Parker said.

“Logan was a good friend of mine. He always tried to make others around him happy. He was a selfless, caring guy. With Melvin being so upbeat and positive, he was gladly accepted into my, and others, friend group,” Parker said. Logan had a knack for technology and was always prepared to aid his friends with their devices or fun facts about what he was passionate about, Parker said. “I learned many facts about computers and other devices from Logan. On top of this, he knew his science well and once again I learned chemical and biological effects from him.”

Parker said his friendship with Melvin is one that he will always remember.

“I am appreciative of the time I spent with him and will remember him always. We argued, we laughed, we cried, we did what all friends would do,” Parker said. “It’s those moments I shall remember for the rest of my life.”

Taylor Lawson has many memories to look back on with Melvin, from small moments to big.

“There are a lot of amazing memories with Logan, but I can’t decide on just one so I’m going to say a few briefly. Firstly I am going to miss the times where we would run around singing songs and having unnecessary conversations about water. I am going to miss seeing

the little doodles he made on the boards at school. I am going to miss playing volleyball with him in the gym and hiding under the bleachers until Mrs. Douglas turns on the lights. I’m going to miss him helping Coach Smith with the computer and him teaching me how to use ‘Word.’ I’m going to miss the random videos of his keyboard lighting up and him playing with his cat,” Lawson said. “He will forever hold a piece of me wherever he is.”

Melvin was both family and a friend to his friends, Lawson said.

“He was always there for everyone. Logan was family, not just a friend. I remember hugging him after lunch because I hardly got to speak to him at school. My friends and I will never forget about him. He was one of my closest friends,” Lawson said. “He is gone but he will never be forgotten.”