The story of Rick Rescorla, Vietnam Hero and Hero of 9/11

[Author’s note: Our recent columns have been about commemorating The Greatest Generation, the Heroes of WW II. We pause this week in remembrance of a Hero of 9/11, who was also a Hero of the Vietnam War.]

This week marked the 19th anniversary of the bombing of the Twin Towers in New York City.

One of the many heroes that day was Rick Rescorla, who was also a decorated hero of the Vietnam war.

The year was 1992 and I was at a book signing and listening to a soft-spoken, old soldier tell me about the book he had written. That soldier was retired Lt.Gen. Hal Moore, who had co-authored “We Were Soldiers Once and Young” with Joe Calloway. The book describes the battle of the Ia Drang Valley, the first major conflict of the Vietnam war.

I had never met Hal Moore before that day in Auburn. As we chatted while he signed my copy of his book, I could sense the courage and strong character behind those steel blue eyes. They made a movie of his book. You can get a sense of that giant of West Point when I tell you that Mel Gibson played the part of Hal Moore in the movie, “We Were Soldiers,” based upon the book. I thanked Gen. Moore for the book and for his service to our country. As I walked away, I noticed the front cover of the book for the first time. It showed a young soldier, in full battle fatigues, during the Vietnam war. The picture was made during the battle of the Ia Drang Valley and it depicted a young Second Lieutenant, Rick Rescorla. At the time the picture was made,  Lt.Col. Hal Moore had been the Commanding Officer of the 2nd Battalion, 7th Calvary Regiment, 1st Air Calvary Division that fought in that battle. After reading his book, I came to appreciate the courage and dedication of men like Hal Moore and Rick Rescorla, who led our country’s troops during that unpopular war. This story is about Rick Rescorla, a man truly larger than life.

Rick Rescorla was an unlikely soldier to even be in Vietnam in 1965. Cyril Richard Rescorla was born in May 1939, in Cornwall, on the coast of England. He had joined the British Army at age 17 and had served in Cyprus and Rhodesia. In the early 1960s, Rick Rescorla resigned from the army and emigrated to the United States. He lived in Brooklyn for a time before enlisting in the U. S. Army in 1963. After basic training at Fort Dix, N.J., he was sent to Officer Candidate School. Upon graduation, he was commissioned a Second Lieutenant and sent to Airborne Training at Fort Benning, Ga. After completing airborne training, he was assigned as 1st Platoon Leader, Bravo Company, 2nd Battalion, 7th Calvary Regiment, 1st Calvary Division [Airmobile].

Hal Moore and his 7th Air Calvary Regiment, along with Rick Rescorla, were sent to Vietnam in 1965. As a platoon leader of young American soldiers, Rick Rescorla had one major advantage – he knew war and they did not. Hal Moore said, “He was the best platoon leader I ever saw.” While serving in the British Army, Rick had picked up a talent for singing “soldiers’ songs,” those with bawdy lyrics. The songs had helped ease the tension in those faraway regions of the British Empire and Rick sang them to his troops in Vietnam. In that war zone where men were constantly in danger, the songs had the same effect of easing tensions and taking soldiers’ minds off death. That voice that boomed out songs could also boom out commands when the time came.

Rescorla’s duties changed after arriving in Vietnam and he became a liaison officer with new responsibilities. He was put in charge of handling Long Range Reconnaissance Patrols [LRRPs] for Hal Moore’s 3rd Brigade,  7th Calvary Regiment. They called their units, Ground Reconnaissance Infiltration units, “GRIT” for short. It was said that more than 100 men tried out for the unit, but Rescorla only picked 15. The GRIT unit would go out ahead of the Brigade, penetrating deep into enemy territory, in search of intelligence.

American intelligence had learned that a large company of North Vietnamese regulars [NVA] had infiltrated the Central Highlands area of Vietnam. On Nov. 14, 1965,  Lt.Col. Hal Moore’s 2nd Battalion, 7th Calvary was airlifted by helicopter into the area in a test of the new air mobile tactics. They arrived at Landing Zone X-ray, and were immediately attacked by the superior force of NVA. This was the beginning of a four day battle that would cost 305 American lives and more than 3,000 NVA. On the second day of the battle, Rescorla’s Bravo Company was sent in to replace the first company that had been almost wiped out. During their first night, Rescorla and his men repositioned their machine guns and artillery and dug new foxholes behind their current ones, while booby trapping the old ones. His men recalled that during the night, Rescorla went from foxhole to foxhole, encouraging his men, all the time singing an old Cornish mining song. The next morning, Bravo Company fought off four assaults. Rescorla described it as a killing field where they killed more than 200 NVA while sustaining only a few injuries. He would later write, “The stench of the dead would stay with me for years after the battle.” While Bravo Company rested the next day, another part of the battalion was ambushed at Landing Zone Albany. Bravo Company was asked to fly in and help. Rescorla was among the first to jump from the Huey while they were still under fire. One of the platoon leaders under siege recalled, “We were all cowering in the bottom of our foxholes, expecting to get overrun. Rescorla gave us courage to face the coming dawn. He looked me in the eye and said ‘When the sun comes up, we’re gonna kick some….’ “ The next day, the battalion was able to fight its way out of L.Z. Albany. Rescorla had earned the nickname Hard Corps,  given to him by his troops. After his one tour in Vietnam, Rescorla returned stateside, the recipient of the Silver Star, the Bronze Star and a Purple Heart. He left active duty in 1967 and joined the active reserve, finally retiring in 1990 with the rank of Colonel.

Upon returning to the United States, Rescorla used his GI benefits to get a Bachelor of Arts degree from the University of Oklahoma. Rick met his first wife, Betsy, there and they would be married in 1972. They had two children and were divorced sometime after their children were grown up. After Rick received his B.A., he  continued his studies and received a Master of Arts degree in English and a law degree from the Oklahoma City University School of Law. From there, he took a position at the University of South Carolina where he taught criminal justice for three years. He also published a book on the subject.

In 1985, Rescorla took a higher paying job with Dean Witter Reynolds, whose offices were located at the World Trade Center in New York City. His job with security caused him to become concerned after the bombing of Pan Am 103 over Lockerbie, Scotland in 1988. He contacted a friend, Daniel Hill from Rhodesia who specialized in counterterrorism, and together, they assessed the security of the WTC. After they walked into the basement without being noticed by security, they felt that the WTC was vulnerable to a terrorist attack. They put their concerns into a report and sent it to the Port Authority of New York and New Jersey, the owner of the WTC. According to James B Stewart, who wrote a biography of Rescorla, the recommendations were ignored because of the expense. After the bombing of the WTC in 1993 by a group of followers of the radical Sheikh Omar Abdel Rahman, Rescorla’s report was revisited. Many of the changes that had been recommended were adopted. After the 1993 attack, Daniel Hill was hired as a security consultant by Rescorla, who continued to have concerns about the security of the WTC. Rescorla and Hill both felt that the real danger to the WTC would be from an attack by a plane crashing into the twin towers

In 1994, Rescorla was diagnosed with prostate cancer and underwent surgery. Despite a positive prognosis, the cancer spread to his bones by 1998. He was still undergoing painful treatments that year when he met Susan Greer while out jogging barefoot near his Morristown, N. J. home. Susan had three daughters by a previous marriage and was employed as an assistant to a dean at Farleigh Dickinson University. Rick and Susan were married in February 1999.

By 1997, Dean Witter had merged with Morgan Stanley and Rescorla continued to express his security concerns to his new bosses. He felt that they should leave New York for New Jersey, where it was safer and cheaper. Morgan Stanley took no action on Rescorla’s proposal, citing their lease with the WTC which did not terminate until 2006. Still concerned, Rescorla and Hill started training company employees in evacuation drills. The security team’s strict approach to the drills brought them into conflict with company executives who were concerned about work interruptions. Hill and Rescorla still continued the drills. Their concern and dedication to the building’s security would pay off on a day that would become infamous in American history.

Skip forward a few years to September, 11, 2001. At 8:46 a.m., the North Tower of the World Trade Center was struck by American Airlines flight 11.Rick Rescorla was in his office on the 44th floor of the South Tower and heard the explosion. He could see the smoke from his window. Shortly after the explosion, the Port Authority made an announcement  over the building’s P.A. system, urging people to stay where they were and remain calm.

Rick Rescorla was alarmed. Using a bullhorn, his walkie-talkie, and his cell phone, he immediately went about getting people to evacuate down a stairwell from the 44th floor. He continued his efforts, even after he felt the impact of United Airlines flight 175 hitting the South Tower at 9:03 am. Many people were now in full panic but Rick kept trying to keep them calm, even singing some of the old Cornish songs from his childhood. In the midst of the panic, Rick found time to call his wife Susan. He told her, “Stop crying. I have to get these people out safely. If something were to happen to me, I want you to know I’ve never been happier. You made my life.”

After evacuating most of the 2,687 Morgan Stanley employees, Rick went back into the South Tower to make sure everyone was out.  A colleague saw him and told him he should evacuate like everyone else. Rick replied, “As soon as I make sure everyone else is out.”   Rick Rescorla was last seen on the 10th floor, heading upward. The South Tower collapsed shortly after that at 9:59 am. Rick’s remains were never found and he was declared dead three weeks after the attacks

The country learned about Rick Rescorla’s heroics some six weeks after the attacks in an article in The Washington Post  by Michael Grunwald, entitled “A Tower of Courage.” Many honors for Rick followed. In 2003, the Revived Cornish Stannary Parliament recognized Rick with the White Cross of Cornwall award. A statue of Rick Rescorla was unveiled at the Walk of Honor at the National Infantry Museum at Fort Benning, Ga. in 2009. That same year, he was inducted into the Oklahoma Military Hall of Fame. The Rick Rescorla National Award for Resilience was created by the Department of Homeland Security. On September 11, 2019, President Donald J. Trump announced that Rick Rescorla would be honored with the Presidential Citizens Medal.

Susan Rescorla received the award at a White House ceremony on November 7. 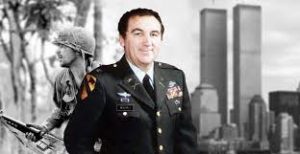