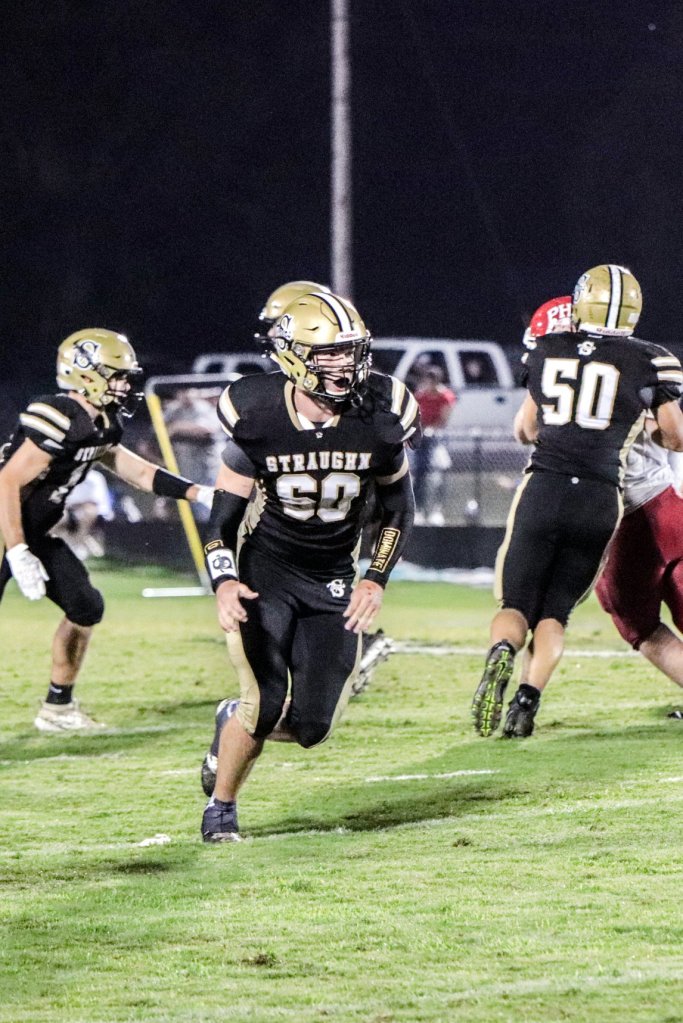 With the first three games at home complete, attention turned to the first road contest last night.  Straughn (4-0, 2-0) made the long trip to Ashford (0-3, 0-2) and walked away with a 19-0 shutout.  The Tigers only led 7-0 at halftime but picked up a pair of third quarter touchdowns and stymied the Yellow Jackets on defense.  Head coach Bradley Stephens said, “We got through it and had to make some adjustments at halftime to do what we needed to do.  The boys played hard and rallied back in the second half to take care of business.  I’ll take a not so pretty win over a pretty loss.  They played really well.”  SHS notched its fifth straight win in the series and held AHS to -12 total yards on the night.

The Yellow Jackets won the toss and deferred to the second half.  Due to a penalty, the opening kickoff was replayed but went out of bounds.  Trey Strickland picked up four yards on the first play before a holding call negated a nifty run.  Mason Turner found Abram Guilford open on second and long with a 14-yard gain.  The Tigers were ultimately forced to punt but quickly got the ball back after a home three and out.  Strickland began the second drive with 16 yards on four carries and converted a fourth and 1.  Following a 6-yard pass to A. Guilford, Strickland moved the chains again with a 6-yard run.  AHS held there and regained possession after another punt.  Ben Kimbril then delivered a punishing tackle for loss to set up fourth down, but the hosts kept the ball after a fumble.  Isaac Grant came up with a nice tackle on second down.  The turnover bug bit SHS yet again as action was locked in a scoreless tie after one.

After starting the second quarter pinned deep, Straughn used an 11-play, 87-yard drive to dent the scoreboard first.  Jaylon Guilford notched a pair of yards to begin the drive before Strickland bolted 18 yards on back-to-back plays.  Strickland kept mowing the ball down the field until Turner found A. Guilford open on third and 7 to move the chains.  J. Guilford then blitzed 23 yards to the opposing 10 where Strickland shook off a trio of defenders to reach pay dirt.  Samuel Hammett added the PAT for a 7-0 lead with 5:02 to go in the half.  Ashford got off to a sluggish start on its next series but was given a reprieve due to another miscue.  Hunter Bryant found Marquez McKnight open on a 24-yard pass aided by a roughing the passer call to put the ball at the 13.  The Yellow Jackets then ran into a buzz saw and were held off the scoreboard.  Unfortunately, the Tigers could not take advantage as an interception hurt, and the score remained 7-0 at the break.

AHS began the second half at its own 31, but three straight incompletions brought up fourth down.  SHS brought the heat and forced a fumble on the punt attempt to set up in great field position.  A huge opportunity to add to the score did not come to fruition as a 31-yard field goal was no good.  The defense continued its good work and forced another three and out as the offense took over at the 49.  Turner threw a 26-yard strike to A. Guilford to put the Tigers in business.  Strickland then ran for a 9-yard gain and got just enough on fourth down to move the chains.  Two plays later, A. Guilford connected with Nicholas Lawson on a 5-yard pass.  A. Guilford followed with consecutive nifty receptions and converted a pivotal fourth and 6.  Strickland scored from two yards out with 2:32 in the third and built a 13-0 lead.  The try for two failed, and it wasn’t long – 19 seconds to be exact – before more points came.  The Yellow Jackets were in disbelief when J. Guilford cashed in a pick six and raced 42 yards to the house at the 2:13 point.  That capped the scoring on the night when the PAT was unsuccessful.

Micah Turner closed the third with a huge tackle for loss as Ashford settled for another punt.  Straughn took over and used a balanced attack to reach the opposing 30.  Despite taking nearly five minutes off the clock, AHS stood its ground, but it was déjà vu once more as SHS continued to hold its region counterpart at bay.  Strickland tallied 21 yards on the initial three plays of the final drive.  Aaron Olhava took over and finished out the contest with 43 yards on six carries.  The Tigers celebrate Homecoming next time out with a visit from St. James (2-1, 1-0) on Friday, September 18.  “They will be well-coached and have been for a while, so they will be in the right place at the right time.  We’re going to have to bring our A game.  They’ve beaten us the last two years, but this is a new year and a chance for us to get a win,” Stephens said.  In other region action, Dale County edged Geneva 28-22, Alabama Christian handled B.T. Washington 35-6, and St. James thumped Bullock County 38-14.