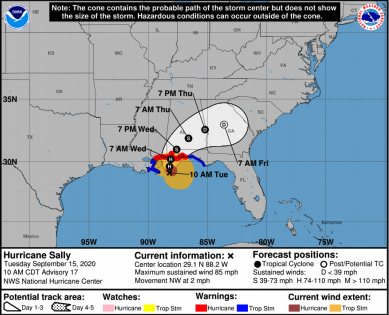 According to the Covington County Emergency Management Agency and the Mobile Weather Forecast Office, Hurricane Sally is dangerous and will cause a potentially historic flooding event.

Sally’s track shifted slightly east from the last advisory and the latest forecast brings the core of the hurricane across coastal Alabama Wednesday morning.

– Hurricane Warning remains in effect for Mobile and Baldwin Counties in Alabama, Escambia and Santa Rosa Counties in Florida, and Stone and George Counties in Mississippi.

– Tropical Storm Warning for all other areas (just added Butler, Crenshaw, and Covington)

The rainfall potential for Covington County is 10 to 15 inches.

“Rainfall totals of 10-20” with localized amounts of 30” are possible across southeast Mississippi and coastal Alabama and northwest Florida,” Harris said. “Further inland, rainfall totals of 8”-15” with locally 20” to 25” are possible. These values will continue to be updated and adjusted with corresponding storm track changes. Flash Flood Watch in effect Monday morning through early Thursday morning all of northwest Florida, all of southwest and south central Alabama, and all of interior southeast Mississippi. Heaviest rain totals and greatest flooding potential will be Tuesday until early Thursday morning.”

As a result of the hurricane, early Monday morning Gov. Kay Ivey closed all of the Alabama beaches.

LBW Community College closed all of their campuses and canceled classes due to Hurricane Sally.

“LBWCC will be closed Tuesday, September 15, and Wednesday, September 16, due to the possibility of severe weather and flooding associated with Hurricane Sally,” According to a statement on its Facebook page. “All-day and night classes for Tuesday and Wednesday are canceled. All students should remain home during this time. Online and hybrid classes will continue to meet virtually. LBWCC will reopen with a normal schedule on Thursday, Sept. 17.”

The City of Andalusia joins the Covington County EMA in encouraging residents to make storm plans now. If you do not feel comfortable in your home, please make arrangements to move to a safer place. EMA has no plans to open a local storm shelter.

Mayor Earl Johnson conducted a storm preparation meeting for city departments earlier today, and its police, fire, public works and utilities departments will be prepared to deal with Sally’s effects.

We will continue to update as the situation evolves.