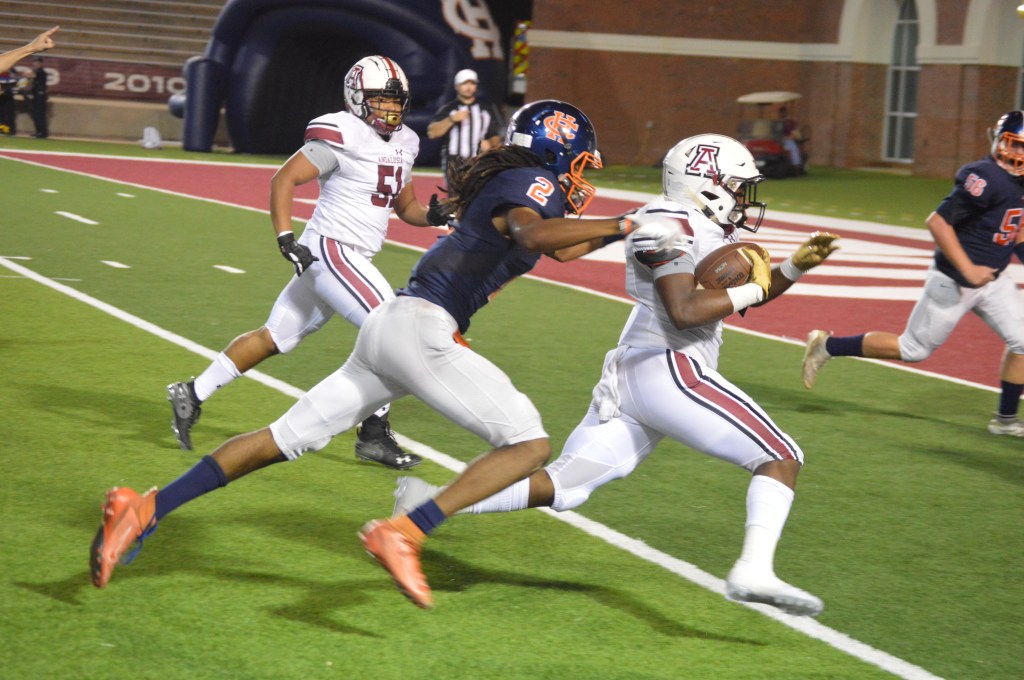 On the first offensive play, AHS quarterback Jake Wilson connected with Isaiah Brundidge for a 68-yard touchdown to get the Bulldogs up 7-0.

In the second quarter, Wilson connected with Chip Morgan to increase the Bulldog lead 14-0.

The Trojans fought back rushing to the end zone to cut the lead 14-6.

With 6:49 left in the half, the Bulldogs started on the opposing 30 yard line. Mike Hourel then rushed for a first down to the 18 yard line and Tyrese Sinkfield rushed to the 10 yard line to set up a 28 yard field goal attempt for Gage Theus. After squeezing it in the uprights, the Bulldogs were up 17-6.

AHS kept the scoring effort alive in the second quarter when Bryce Dorsey made a big first down catch to put the Dogs in the red zone. Hourel then punched it in to make it 24-6 after the PAT.

With 1:42 left in the half, Omare Lattimer had an interception for the Bulldogs. Bryce Dorsey got AHS into the red zone again after a first down catch to the nine yard line, but a fumble in the end zone resulted in the Trojans taking over at the 20 yard line.

The third quarter opened with AHS having the ball, but fumbling on the first drive.

The Trojans’ pass to the end zone was complete for a touchdown, but after a blocked PAT, the Bulldogs were still up 24-12.

With 3:40 left in the third quarter, Mike Hourel had a huge first down rush to set up a touchdown for J’Marion Burnette. The Bulldogs were up 31-12.

At the very end of the third quarter, a fumble was recovered for AHS and they took over at the 35 yard line.

Dorsey had another huge play for the Bulldogs getting a first down catch to the 49 yard line.

With 8:52 left in the game, Hourel managed to rush across the entire field to get to the end zone and put the Dogs up 38-12.

Josh Gurley then had a pick-six with 7:20 to go in the game to end the scoring effort for the Bulldogs 45-12.

“I think more than anything, we made some improvements on special teams,” AHS head coach Trent Taylor said. “It got sloppy at times, but sometimes with games like this, it is going to look that way a little bit. I thought our execution on offense was really good. This was a good win. Any time you win is good, but certainly a region win like this is really big. We have to make sure that we are taking care of business in all of these region games. We’ll go to work on Monday and get ready for next week’s game against a tough non-region opponent.”