NO SUBSTITUTE FOR HEART AND DETERMINATION: Andalusia Junior High Bulldogs take down Dothan Prep 20-6 on Thursday 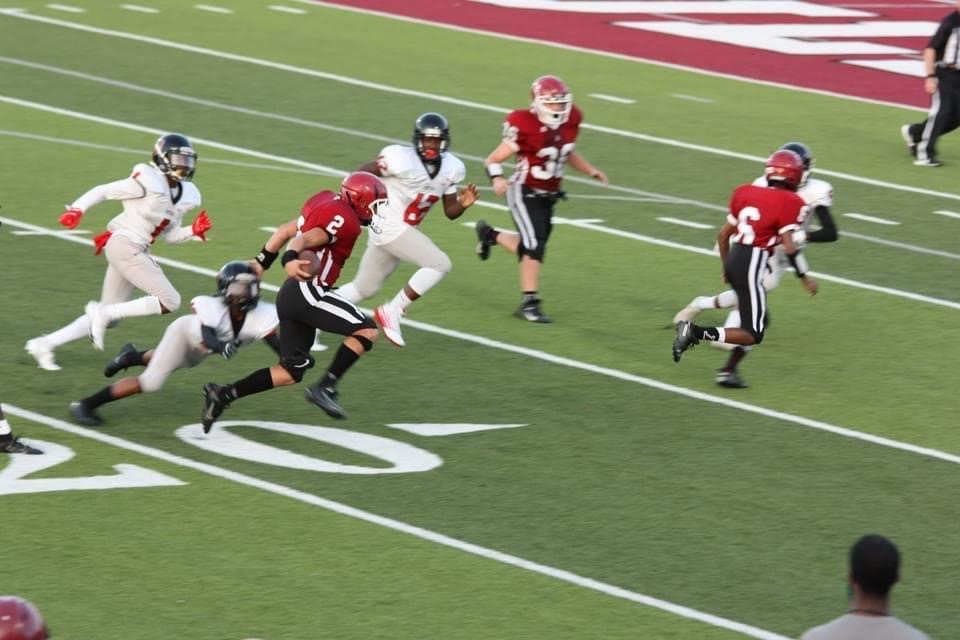 Returning to the field after a layoff of a couple of weeks, the AJHS Bulldogs dominated an athletic Dothan Prep Tigers squad, 20-6. The Bulldogs handed the Tigers their first loss of the season and the victory kept the Bulldogs near the top of the heap in the playoff chase.

The first quarter, the Bulldogs were displaying the rust of missing a couple weeks of practice and games. The offense spit and sputtered when the Bulldogs had the ball, yet the Bulldog defense fought hard to keep the team in the game, only surrendering 6 points on a Dothan prep 7 yard QB keeper – the only points the Bulldogs would give up the entire game.

In the second quarter, momentum shifted the Bulldogs way. Bulldog QB Calvin Daniel #15 sparked the offense with a 27 yard pass to #36 Riley Tucker. The drive was capped with a 10 yard TD pass to #85 Ethan Townsend and a two point conversion pass to #6 Kal Crittenden who made incredible diving catch to help the Bulldogs take the lead, 8-6.

The ground game also gained traction in the second quarter, led by #2 Zade Newton. With 3:45 left in the first half, Zade followed his blockers and pounded the ball into the end zone for his first score of the night. The two point conversion failed, but the Bulldogs took a 14-6 lead into halftime.

The second half was dominated by the Bulldogs. Zade Newton scored his second TD of the night for the Bulldogs final score of the evening, 20-6. Zade finished the night with 108 yards on 24 carries and 2 TDs. He also added one reception for 21 yards.

Calvin Daniel led the Bulldogs in passing, going 3 for 5 for 58 yards and 1 TD. Noah Curry #14 also had some snaps at QB and rushed four times for 27 yards.

On Defense, It was a team effort by the Dogs. #4 Xsiah Walker was the leading tackler, with 4. #35 Jacob Sellers added 3.5 tackles (1 for a loss). #8 Cardariyus Love was a ball hawk, adding a tackle along with two pass deflections. On the turnover front, #6 Kal Crittenden had a fumble recovery and #2 Zade Newton added an interception to stop the Tigers in their tracks.

“Considering what challenges we had in front of us – playing an undefeated Dothan Tigers team after a couple of weeks of no games and few practices,” said Head Coach John Dugger, “the coaching staff was pleased with the effort of the Bulldogs tonight. Hats off to Dothan – they have a big, athletic and fast team and played well. But there is no substitute for heart and determination and that’s what our Bulldogs showed them.”

The AJHS will return to the practice field next week to prepare for another tough road game vs the Dauphin Jr High Dolphins in Enterprise on Thursday, October 1st.

BOBCATS SHOW OUT AGAINST DALEVILLE