HOMECOMING SHUTOUT FOR THE BULLDOGS: Andalusia uses a strong second half to take down Headland 42-0 Friday night 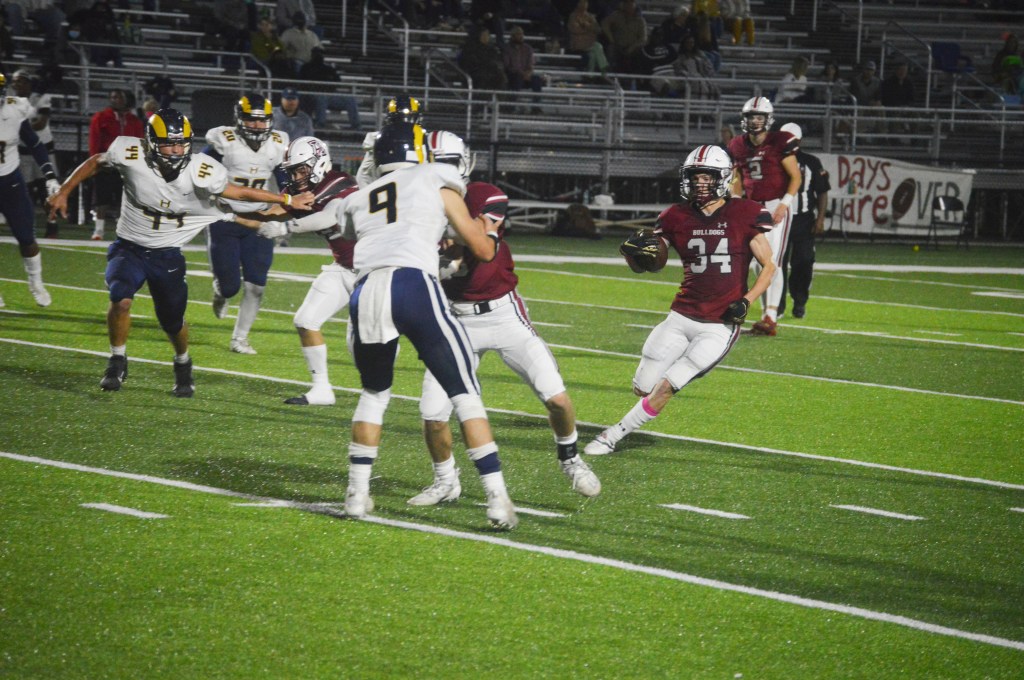 The first quarter for the Dogs was a little slow, but Isaiah Brundidge, Ja’Marion Burnette and Caleb Blackston all had first downs and Blackston had an interception with 3:52 to go in the first quarter.

At the beginning of the second quarter, the Rams were backed up in their own territory on fourth down when C. Blackston came up big and blocked a punt and ran the ball into the end zone to strike first blood for the Bulldogs. After the PAT, the Bulldogs were up 7-0.

With 6:59 to go in the half, Omare Lattimer rushed to the six yard line, but it was called back for holding.

C. Blackston had a catch to get the Bulldogs to the 26 yard line with 4:16 left in the half.

Josh Gurley then pounded it in the end zone to make it 14-0 at the end of the half.

In the third quarter, things started going again with 6:23 left when C. Blackston had another first down catch at the opposing 22 yard line.

Burnette then rushed to the five yard line where Mike Hourel followed to punch it in the end zone. After the PAT, Andalusia increased their lead 21-0.

On the next Andy offensive drive, Dorian Crittenden rushed for a first down to the opposing 24 yard line.

AHS quarterback Jake Wilson then connected with Brundidge to get the touchdown for the Bulldogs and make it 28-0.

The Bulldogs kept pumping the gas in the third quarter as J. Gurley had a one-hand interception with 1:21 left in the quarter.

Crittenden rushed to the 2 yard line, where Josh Gurley punched it in to end the quarter up 35-0.

At the end of the fourth quarter, a fumble in the end zone recovered by Andalusia’s Josh Riley ended the scoring effort at 42-0.

“We’ve got to clean some stuff up obviously,” AHS head coach Trent Taylor said. “We probably only had 400 yards of offense in the first half.”

Though they started slow, Taylor said there his team stayed focused all week during homecoming festivities and stepped up in the second half.

“Any time you go into homecoming, you wonder where their minds are at,” Taylor said. “But our kids had a great week of practice, they really did. We went in at half time and we had only given up I think two first downs and I think we moved the ball offensively pretty well, we just couldn’t get out of our own way. There are going to be nights like that and I’m just glad it was a night like tonight.”

With next week off, Taylor said he plans to take it easy and heal some guys up.

“It’s time to work on Andalusia a bit,” Taylor said. “Then we have two tough ones to end the year with Greenville and Ozark. I’m proud of where we are at right now, but certainly, there is a way to go.”

Next week, the Bulldogs will be off.