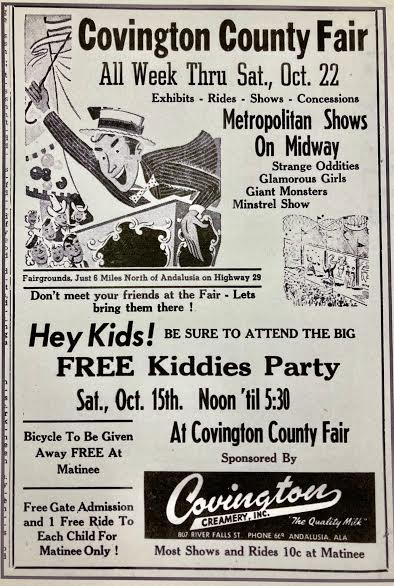 The story of the Covington County Fair has an interesting history with lots of twists and turns. Its locations and sponsors

have changed through the years.

In 1930 and 1931 the fairs were held on a Brewton Highway or South Three Notch Street lot. The admission was reduced from 25 cents to 10 cents thanks to Manager Thomas P. Littlejohn. Ladies were admitted free one night. Booths were on display made by Adellum Church, Brooks, Red Level, Stanley, Sanford, and Antioch Communities. Special emphasis was on Opp Day, American Legion Day, School Day, and Farmers’ Day.

In 1932 Manager Littlejohn announced that “all ‘skin games’ have been eliminated and that all shows are so conducted that one’s wife or daughter can be admitted without hesitation.” All riding devices were operated for five cents for the benefit of the local children.

The 1933 fair was sponsored by the American Legion Post No. 80 with a “liberal prize list, prize money to be put up in a local bank in advance so that there will be no doubt to the winners receiving the prizes offered.”

In 1934 W. C. Boutwell was manager with the American Legion sponsoring the fair once more. One attendee stated, “We saw one cotton stalk in the Adellum exhibit bearing 68 open bolls.” A popular exhibit was “The Fat Lady” weighing in at 745 pounds!

In May 1935 a legal notice in The Andalusia Star posted a default on mortgage executed in 1920 by the Covington County Fair Association on a ten-acre parcel along the Andalusia and Sanford Road with a public auction scheduled for June. That situation must have been worked out since in September 1935 headlines read, “County Fair Will Be Bigger, Better.”  Apparently Fair Ground Park had been moved from the cotton mill location to the parcel on Sanford Road and Through Street. The location mentioned was “east of town.” Many old timers remember the fair being staged on the property behind the Idle Hour. It is still known as the “Fair Grounds” Subdivision.

In 1936 the announcement of the fair stated that “The
annual event is expected to draw a larger crowd than in a number of years. Dr. H. H. Martin (local chiropractor), post commander, will be assisted by Mr. Littlejohn. Martin has been ‘on his toes’ for the past month. Legionnaires say you’ll want to go there because there is where you will find your friends during fair week.” That organization continued through the 1930s being sponsors of the fair.

In 1937 a “good brass band” was booked. “Thursday is wedding night. The fair will pay $10.00 cash and marriage license fee including the minister for a couple that will agree to get married at the fair. There will also be a Wild West Show.

By 1940 the Andalusia Baseball Association was the sponsor. “The Great Lakes Exposition Shows will feature the  most modern riding devices.”

In the fall of 1941 prior to the Pearl Harbor invasion, Andalusia businessmen sponsored the CCFair and Fall Festival. Mr. G. G. Dunn of Covington Stores, fair association secretary, stated, “It is the ambition of the association to establish Andalusia as one of the largest fairs in the state. The attractions and exhibits of this annual event seem to improve each year. People just like to go to a county fair. It brings together the rural and urban people to an extent that no other local attraction does.”

During the years of World War II, there is no mention in the old newspapers of fairs until 1946 when the Sparks Shows featured 250 wild animals at the “Fairgrounds” and in 1947 when a Spring Fair in April sponsored by the VFW was held at the Armory on Dunson Street extension (now Prestwood Bridge Road).

In 1949, women again (just like in 1916) pushed for and promoted a county fair. The Parnassus Club set the theme of “Cancer Awareness” in conjunction with the American Cancer Society. Fair Association President Marion Boyette, Jr. and the Chamber of Commerce got the wheels turning with the slogan, “It’s Your Fair – So Be There!” The Coliseum Building was named as the location. The Beesley Packing Company plant was on Debro Hill so that seemed to be the spot in the early 1950s until  1951 when a rodeo was added and the event was held on the Florala Highway on the grounds that became the Portemont winter headquarters and later their permanent home. Daredevil attractions showed up with 50 rides on the midway.

In 1953 the fair announcements were advertised as “New Fair Grounds Near Gantt on US 29 North (Gantt Beach near the Amvets Club).”

In 1954, there was a “BAN on carnivals having gambling and girl shows!” Midway attractions continued.

In the 1957-59 time frame, the fair was “under new management” with special displays featuring flowers and gardens. Poultry displays with rare breeds and hens that lay red and green eggs attracted large crowds. For thrill-seekers, the rides included the new “Scrambler,” the “Rock and Roll,” the “Tilt-A-Whirl,” the “Fly-O-Plane,” and the “Octopus.” A “Ferris Wheel” provided a sky-vue of the entire carnival spectacle. “Kiddieland” rides built just for “Junior and his Gang” assured a maximum of safety.

In 1961, the Andalusia Police Department took over the sponsorship. A bicycle give-away by the Andalusia Moose Lodge, president Charles Little, was a popular draw to the fair which had moved back to the Coliseum Building on River Falls Street.

In 1963, the “First Annual Fair” was sponsored by the Andalusia Kiwanis Club with Johnny’s United Shows on the midway. A giant tent was set up for the exhibits. This tradition, the annual fair, continues until today (2020). The Kiwanis Building on the South By-pass was constructed in 1995. No more tents, no more wet hay, dust, and mud in the exhibit areas. One of the finest places probably in the state of Alabama to hold a fair.

A commemorative bronze plaque hangs in the entrance to the building bearing this wording, “KIWANIS COMMUNITY CENTER, DEDICATED TO COMMUNITY SERVICE.” The list of contributors is lengthy. The major contributor was the Solon & Martha Dixon Foundation.

Another plaque hangs there honoring Harry and Helen Hinson in grateful appreciation for their vision, hard work, and leadership in the formation of the annual fair in 1963 and the construction of the project in 1995. It was placed by the Kiwanis Club in 2006.

My request went out this week on social media for friends to post their growing up memories of attending the fair. Let me share a few of these.

Betty Williams – “I remember a fair when they had a gorilla that would wrestle people.”

Butch Coone – “I remember fortune tellers at the fair.”

Tom Sawyer – “The most exciting week in the year – the Octapus and Rock-O –Plane rides!”

Deb Pebworth Miller – “My mama and her garden club friends entered their flower arrangements. My Senior year at AHS, I was named ‘Fairest of the Fair.’”

Gerald Jordan – “While in high school (about 1971 or 72), I worked for Architect Douglas Baker, president that year of Kiwanis Club. He let me design the big metal building for the Coliseum fairgrounds all by myself. He would take me out there about once a week while construction was going on to make sure they were following the plans. I think it is still there on the old site used today as an animal shelter.”

Mary Jo Griffin – “I still have my ribbons from winning 1st prize on my ‘Birds of the States’ quilt and other ribbons for crafts during the years.”

Norma Williams – “My first memory of the fair is the site behind the Idle Hour restaurant on Sanford Road.”

Terry Wilhite – “I saw the first microwave there on exhibit. It was amazing to see bacon fry but the paper plate not to burn. Even for a kid, the exhibits, especially the wild life ones, were right up there with the bumper cars.”

Teresa Hoisington Donaldson – “All those craft booths and the ribbons they won – memorable! The military booths with the “I WANT YOU” posters – unforgettable!”

Donna Fountain – “The best time to go to the fair was at night – all the lights, sounds, smells – stays in my memories. They used to put us on a school bus at Straughn and take us to ‘School Day’ at the fair.”

Alan Sanders – “I sneaked into one exhibit called, ‘WHAT IS IT?’ Someone had taken a white goat and spray painted purple spots all over it!”

Jackie Hare – “One year they had a baby elephant and the same year a polar bear in a cage – maybe in the late 1940s!”

Peggy Eiland – “When I worked with WCTA Radio, we did remote broadcasts from the exhibit tents. It was located on the coliseum grounds. Etched in my memory is the Mann Laundry’s exhibit that featured their products. Their sign proclaimed, ‘COMPLETE DUST CONTROL,’ however, the place was covered in dust because the booth was located in a tent open to the weather!”

Caudy Fay Castleberry – “I am 86 years old, but when I was about 7 years old, you could ride an airplane at the fair. My father told my mother, ‘She is going to ride that airplane with me.’ My mother replied, ‘No, she ain’t!’ And she meant it!”

James Meadows – “One year when the Jaycees were parking cars, I won 50 silver dollars from CCB!”

Deane Walker Goodall – “I won a platter at the fishing booth, still have it!”

Donald Keith Brown – “One year while riding the Saturn V, a hard rain came up. The ride operator didn’t cut the ride short. I was drenched.”

Toni Miller – “Getting out of school early ½ day to go to the fair.”

Tina Helms Williams – “Wonderful memories from childhood to adulthood. I especially remember the smell of hay.”

This writer will add that memorable times at the fair include riding the bumper cars with Paula Sue Cook (Duebelt) and her mother Barbara. I think Paula Sue still has a neck problem! We also were on the very top of the Ferris Wheel when the car we were in juggled. All of our cash rained down to the ground. By the time we went around and round numerous times on the ride, we got out to look for our pennies, nickels, and dimes. There were none in sight!”

So in conclusion, this is October and the county fair is fast approaching. Much work is going into this event by the Andalusia Kiwanis Club, the county and city school children, flower enthusiasts, artists, culinary experts, business people, and other citizens. Like the encouragement that was advertised by “Skinny” Boyette in 1949, “It’s your fair – so be there!” 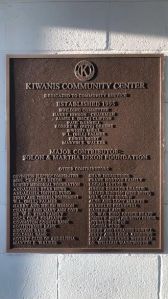 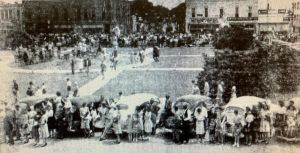