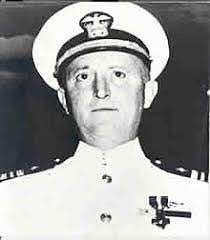 The Congressional Medal of Honor was created December 21, 1861. Since that time, 33 Medals of Honor have been awarded to Alabamians. This is the story of one of those heroes.

Navy Commander Howard W. Gilmore was the first member of the United States Submarine Force to receive the Congressional Medal of Honor during WW II. It was awarded posthumously in 1943.  His story is one of great courage and sacrifice, in keeping with the highest traditions of the United States Navy.

Howard Walter Gilmore was born in Selma, Alabama on Sep. 29, 1902. He enlisted in the Navy at age 18. Two years later, he took the entrance exam for admission to the Naval Academy and scored high enough to be accepted. He graduated from the Academy in 1926, standing 34th in a class of 456. He served four years on a battleship before volunteering for the submarine force. After serving ashore and aboard several submarines, he was assigned to the USS Shark [-174] as Executive Officer [second in command]. During Shark’s shakedown cruise, the submarine stopped in Panama. While on an excursion ashore, Gilmore and another officer were attacked and their throats were slashed. Both officers recovered and Gilmore took command of the Shark in 1941. On the day after the attack on Pearl Harbor, he was transferred to the not-yet-commissioned USS Growler [SS-215] as commanding officer. Gilmore and the Growler began their service in June 1942, performing picket duty north and west of the Hawaiian Islands, along with six other submarines. Later that month, they began their first war patrol in the area of the Aleutian Islands. Their first action came off Kiska when they attacked three Japanese destroyers. One destroyer was sunk and two others severely damaged.  Growler narrowly avoided two torpedoes that were fired at them. For this action, Cdr. Gilmore received the Navy Cross.

Gilmore and the Growler began their second war patrol in August 1942. They patrolled in the East China Sea near Taiwan and were able to sink four Japanese merchant ships totaling more than 15,000 tons. Gilmore received a gold star in lieu of a second Navy Cross. They returned to Pearl Harbor in September.

In October 1942, Growler was sent to Brisbane, Australia by way of Truk in the Caroline Islands. They took part in patrolling and blockading the Japanese during the Marine’s Solomon Islands campaign. They arrived in Brisbane in mid-December, having sunk no enemy ships during their third war patrol.

Gilmore and Growler’s fourth war patrol began on New Year’s Day 1943. They were sent to patrol the Japanese shipping lanes between Truk  and Rabaul in the Bismarck Archipelago. Action came on January 16 when Gilmore sighted an enemy convoy and moved in for an attack. They were able to sink the 6,000 ton-passenger-cargo ship, Chifuku Maru. Other attacks on the convoy were unsuccessful. They also attempted attacks on another small convoy and a gunboat but were unsuccessful.

On the night of February 6-7, Growler was traveling on the surface, charging batteries, when, a short distance away, they spotted the Hayasaki , a 900-ton Japanese provision ship. Gilmore immediately manned the bridge in preparation for a surface attack. At about the same time, Growler was spotted by a lookout on the other ship, which turned in an attempt to ram the submarine. Sensing the impending danger, Gilmore sounded the collision alarm and ordered “Left full rudder,” but it was too late. The submarine inadvertently struck the Hayasaki amidships, causing the Growler to heel over 50 degrees and bending her bow back some 18 feet, disabling the forward torpedo tubes. Almost simultaneously, the Japanese ship began firing its machine gun, spraying the bridge of the Growler with deadly fire. The Junior Officer of the Deck and one lookout were killed. Gilmore and two other men on the bridge were wounded. As he struggled to maintain a grip on a railing, Gilmore shouted to his Executive Officer below, “Clear the Bridge!” The two other men on the bridge scrambled down the ladder to the interior of the submarine below. Lcdr.Arnold Schade, the XO was still recovering from the effects of the collision that had sent him sprawling. As Schade tried to make sense of what was happening, he heard the captain’s voice from the bridge, “Take her down!” Hesitating briefly, Schade ordered the hatch to the bridge closed and gave the order to submerge. Realizing that his condition would not allow him to get below in time for Growler to escape, Commander Howard Gilmore made the ultimate sacrifice for his shipmates. He selflessly gave his final order to take her down.

Sometime later, after hearing no sounds from the Japanese ship, Schade had the Growler surface. They could find no signs of Gilmore and assumed that he must have drifted away. The damage control crew was able to control the ship’s flooding and with temporary repairs, the submarine managed to make it back to Brisbane.

Growler was repaired and returned to the war. On her 11th war patrol, in November 1944, she was lost while attacking a Japanese convoy south of Mindoro in the Philippines. At that time, she was under the command of Cdr. Thomas B. Oakley, Jr. Growler received eight battle stars for her role in the Pacific war. She is one of 52 United States Navy submarines listed  “On eternal patrol” at the submarine memorial at USS Bowfin Submarine Museum and Park at Pearl Harbor.

The Congressional Medal of Honor was posthumously awarded to Commander Howard W. Gilmore for: “Conspicuous honor and gallantry in sacrificing his life for the lives of his crew… “ On July 13, 1943. Cdr. Gilmore’s widow, Hilda and their two children accepted the award on his behalf.

Commander Gilmore was further honored in September 1943, when the submarine tender, USS Howard W. Gilmore [AS-16] was commissioned and placed into service.

“Take her down!” is still a legendary cry, heard throughout the United States Submarine Force. It is a reminder of our country’s highest call to honor, made famous by one of their own, Commander Howard W. Gilmore. 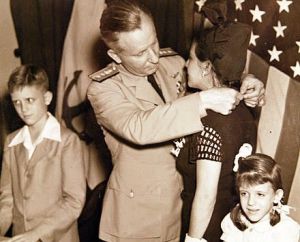 Commander Gilmore’s widow, Hilda, receiving the Medal of Honor, along with her children, July 1943.
[Photo: mohmuseum.org]