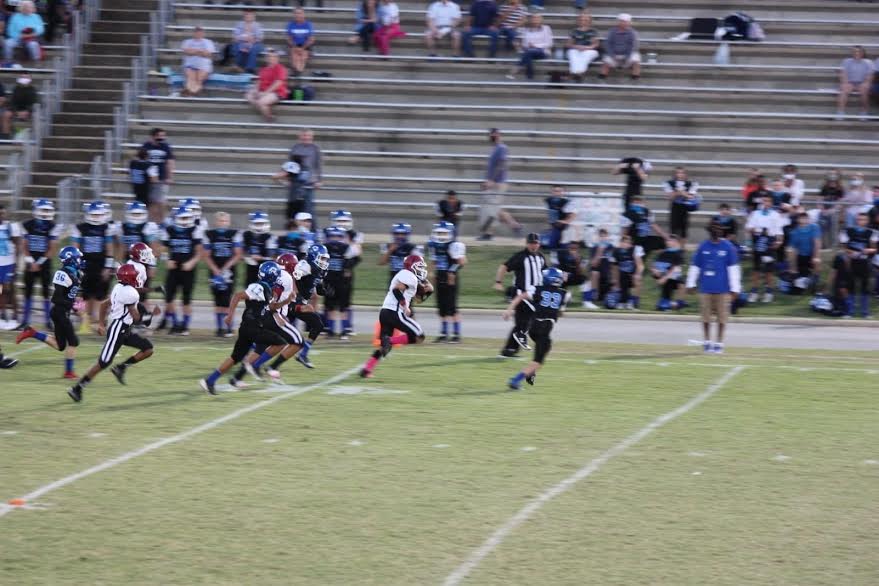 On a crisp, cool fall night in Enterprise, two warriors met on the playing field and battled to the very end. The first night in October saw the mighty AJHS Bulldogs fall 21-18 to the Dauphin Jr High Dolphins. The final score doesn’t reflect the full story as both teams traded blows all night, each taking and giving back the lead.

The game started with a bang as #2 Zade Newton returned the opening kickoff 45 yards down to the Dolphin 30 yard line. Unfortunately, due to penalties, the drive stalled and the Bulldogs had to punt. A nice punt by #35 Jacob Sellers pinned the Dolphins back deep on their side of the field.

Dolphins were then stymied on offensive by a swarming Bulldog defense and were held to a three and out.  The ensuing punt was fielded by #8 Cadariyus Love and returned 10 yards. A few plays later the Bulldogs got on the board with a 20 yard TD by Newton. The extra point attempt was no good and the Bulldogs held a 6-0 lead.

The next blow was landed by the Dolphins. Mixing up their playbook, the Dolphins moved down the field. The drive culminated with a 19 yard TD run by #7. With the extra point being made, the Dolphins took a 7-6 lead.

The Bulldogs landed the next punch on a 15 yard TD run by Newton. The two point conversion attempt failed, leaving the Bulldogs with a 12-7 lead. The Bulldog defense stepped up big on Dolphins next drive. A pass deflection by Love led to an interception by Newton, stopping the Dolphin drive. The Bulldogs took the 12-7 lead into half time.

In the second half, both sides moved up and down the field but drives were foiled by the other. Late in third quarter, the Dolphin regained the lead on a 3 yard TD by #4. The extra point was no good, leaving the Dolphins in the lead, 13-12.

In the fourth quarter, once again both sides traded attacks. Midway thru the final quarter, the offensive play of the night happened for the Dogs. With the ball near midfield, Newton took the handoff and scampered 46 yards for the TD. With the two point conversion, the Dogs took the lead 18-13.

On the ensuing drive, the Dolphins landed the final blow, a 35 yard run by #4. After a successful two point conversion, the Dolphin lead was 21-18. The Bulldogs were unable to get the ball into scoring range and the final gun sounded for the Dolphin win.

“Tonight we saw two warriors fighting on the battlefield, each trying their best for victory,” said Head Coach John Dugger. “Hats off to the Dauphin players and coaching staff. They took every blow we delivered and gave us one back. They have a large, well-run program and should be proud of the job their team did tonight. Our Dogs fell short, but it wasn’t due to a lack of effort. We’ll get back to work next week and ready for our next fight.”

The Bulldogs will begin preparations next week for their season finale as they take on the Greenville Middle School Tigers, Thursday, October 8th at 6pm at AHS Stadium. Please come support these young men. #ThatsWhy

Opp gets the region win vs. Providence Christian