Two inmates arrested for trying to bring contraband in jail 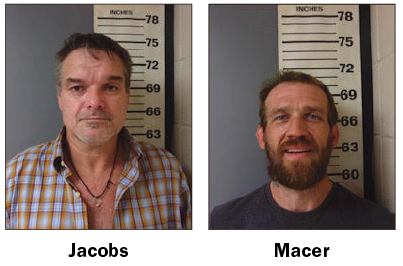 Two inmates were put behind bars after allegedly “suitcasing” contraband into the jail on Tuesday.

According to Covington County Sheriff Blake Turman on October 6, 2020, two area inmates were booked into the Covington County Jail this afternoon. An alert corrections officer, Sgt. Bo Parker was on the job.

Both inmates were discovered “suitcasing” contraband into the jail. Both are being held on unrelated charges with several other charges pending. Christopher Kip Jacobs of Opp and Matt Macer are being investigated for the crime.

“I commend my officer in a job well done,” Turman said. “Although not a pleasant one, it is necessary to keep illegal substances and weapons out of our jail. Recently we have had numerous systematic shake down. Happily, I have noticed a decrease in weapons and illegal narcotics. Cell phones have become scarcer as well. Captain Thomas Hugghins has made a lot of positive security changes and I look forward to a safer detention facility.”