REMEMBER WHEN: Early hospitals in Andalusia 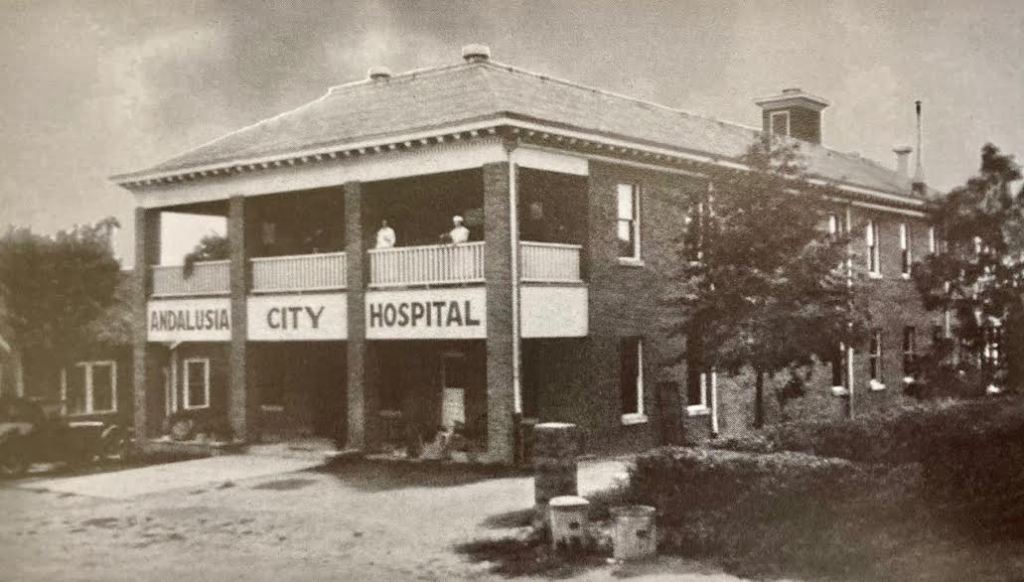 The Three Notch Museum has some interesting antique medical instruments on display that were provided by Andalusia Regional Hospital now known as Andalusia Health. There are also some pictures of early hospitals in Andalusia. Some news items in The Andalusia Star shed some light on the

The hospital was very proud of its up-to-date laboratory. The largest rooms in the hospital were $5.00 per day. The smaller rooms were $3.00 a day including meals. If the operating room was used, a $15.00 charge was made. The anesthesia charge was $5.00. Following the eventual sale of the hospital, the building was used as a school for training nurses.

June 22, 1920 – “ANDALUSIA CITY HOSPITAL OPENED for patients last Thursday. At present, the capacity of the hospital is 12 beds, but plans for an extension are being drawn which will increase the capacity to 32 beds. There is much to be done yet in the way of furnishings before the wards are equipped, but the essential will be supplied as the number of patients increases. Mrs. West of Montgomery is head nurse and is capable.”

June 17, 1921 – “This is the first anniversary of the opening of the Andalusia City Hospital. The event was celebrated by the officers and directors of that institution by tendering a banquet to which not only the officers and stockholders were invited but also a number of physicians and citizens as well.”

“The party met at the hospital building at 12:30 this afternoon and went through the building which is being enlarged and improved. The building which is 43 X 120 feet has three stories with a roof garden 30 X 70 with elevator connections which will be used for the tuberculosis patients. There are plans underway for a regular capacity of 50 beds with emergency provision for 25 additional beds. At the front and rear are sun parlors which provide recreation places for convalescents. It was just one year go which the first operation was performed. A nice concrete driveway will completely circle the building with a covered entrance at the rear for the accommodation of patients, attending physicians, and ambulances.”

“Following the inspection tour, the party went to the dining room where a banquet was served and speeches were made by Mayor T. E. Henderson, Oscar M. Dugger, president of the chamber of commerce, and Col. Allen Crenshaw, president of the Rotary Club. A. M. Riley, hospital board president was toastmaster. Other board of directors present included J. A. Knight, secretary; C. A. O’Neal; A. C. Darling; F. K. Feagin; A. C. Wilder; D. L. Locke;, and O. L. Benson. Dr. T. Q. Ray, house physician, took charge of the meeting and responded in fitting terms to the speeches commending the splendid work done by this institution. A number of citizens enjoyed the hospitality.”

In 1933, Dr. L. E. Broughton, a practitioner for 40 years who had started his career in Searight in 1893, passed away at his home following a heart attack. He was considered an outstanding physician and surgeon, a “prince of good fellows, trusted friend, public spirited citizen, and big-hearted with hundreds of devoted patients in every walk of life.”

In 1934, news spread quickly casting a pall of gloom and sadness over the entire city and surrounding territory that Dr. L. B. Underwood in the prime of his life had died following an automobile accident on the River Falls bridge while making a house call. “He was left-handed and a master with the surgical instruments. His future was unusually bright with years ahead for every promise for greater success.”

April 16, 1936 – “The Andalusia City Hospital is to be known as the Broughton-Underwood Memorial Hospital in memory of Dr. L. E. Broughton and Dr. L. B. Underwood who were prominent in the medical profession until their deaths.”

December 9, 1937 – “Mr. and Mrs. H. D. Thomas of Laurel, Mississippi have taken over the Broughton-Underwood Memorial Hospital of this city.”

March 19, 1938 – OPEN HOUSE SUNDAY AFTERNOON – Andalusia is one of the first cities in the state to secure sulphominopyradiore tablets known in medical science as the latest treatment for pneumonia.”

February 8, 1945 – “Mr. Graydon Stanley purchased the old Covington (County) Hospital, the pioneer institution, and combined the two hospitals under the name of Covington Memorial Hospital combining and bringing them under one management which will add to the efficiency of the services which will render to its clientele.”

July 29, 1943 – “The Hillcrest Infirmary, Andalusia’s newest hospital, will officially open Sunday, August 1. Dr. Ray Evers, director of the hospital, announced that the opening of the hospital would be in the form of a dedication service on the south porch of the hospital’s main building. The public is cordially invited to attend.”

“The new hospital located on the site formerly used as the Covington County Alms House, has 28 beds for adult use; 6 bassinets, and a nurses’ home in one of the buildings on the campus. Eight registered nurses and 5 student nurses will comprise the present nursing staff and will live in the nurses’ home. The hospital will be equipped with the latest pre-war medical and surgical equipment.  Dr. Guinn S. Cost, widely known surgeon in Birmingham, is coming to be an associate of the Evers-Cost Clinic. The hospital is open to all licensed physicians and their patients.”

January 27, 1944 – “Dr. Juanita Bolton McDonald will arrive in Andalusia February 1st to assume her new duties as resident physician at Hillcrest Infirmary, it is announced.”

November 23, 1944 – “WANTED STUDENT NURSES – Employment at good pay with room and board included is offered to young ladies who wish to become student nurses. If you are interested, apply immediately at Hillcrest Infirmary, Jackson Long, Superintendent.”

August 2, 1945 – “HILLCREST INFIRMARY CELEBRATES 2ND ANNIVERSARY – The hospital has made a continuous growth. Dr. Ray Evers, physician and surgeon in charge, assisted by Dr. Juanita McDonald, the management has added a complete laboratory and employed a full time lab technician.

23 nurses are now employed. There are a total of 55 beds with 13 rooms and a nursery added. In the past two years, 433 babies have been delivered and 3034 patients have been admitted to Hillcrest Infirmary.”

February 21, 1946 – “75,000. Additions Under Construction To Expand Hillcrest Infirmary Facilities will make of this one of the best equipped institutions of its kind in this section of the state – Dr. Ray Evers has under construction new additions to his hospital facilities which will include new rooms and 25 beds; a complete clinic to accommodate two medical doctors; one dentist, one ear, eye, nose, and throat doctor; one dispensary; a complete new obstetrical unit with sound-proof nursery; operating suite with two major operating rooms; one fracture room; one emergency room; a central sterilizing unit; an X-ray department; a physiotherapy department; and a laboratory with electrocardiograph equipment and three trained technicians.  All will have the most modern in furnishings and equipment.”

“In addition, a nurses’ home is being built to accommodate 30 nurses. The entire project should be completed within the next few months.”

March 27, 1947 – “Dedicatory Services Held at Hillcrest – Last Sunday was a ‘red letter day’ at Hillcrest infirmary, that being the day set apart for the dedication of the new addition to the hospital now with 100 beds and for the formal opening of the finished institution. The song service was directed by the talented Mrs. H. M. McInnish and the audience joined heartily in the singing of the song, ‘In the Garden.’ Following the simple but impressive dedicatory service, the Hospital, Clinic, and Nurses’ Home were thrown open for the friends to go on tour of inspection. More than 1,000 people visited during the day.”

Well, readers, this is where the Remember When column this week concludes with the story, the ‘history of the early hospitals,’ in the year 1947. For in September of 1947, this writer was born there at the Hillcrest Infirmary, delivered by Dr. Ray Evers. Our first child, a daughter, was later born there in July 1971 in the same hospital which operated at that time under the name Columbia General Hospital. She was also delivered by Dr. Ray Evers who was a dear family friend. Now you may know why that city street is named Hillcrest Drive. 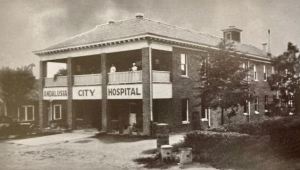 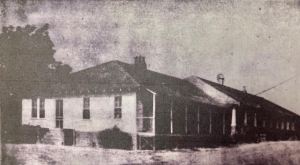 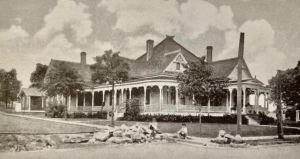 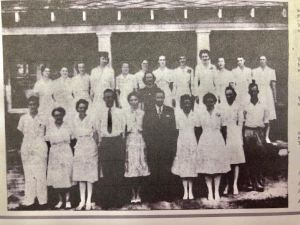 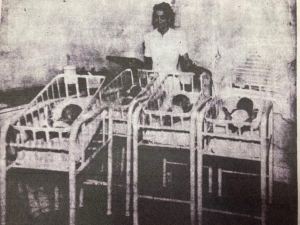