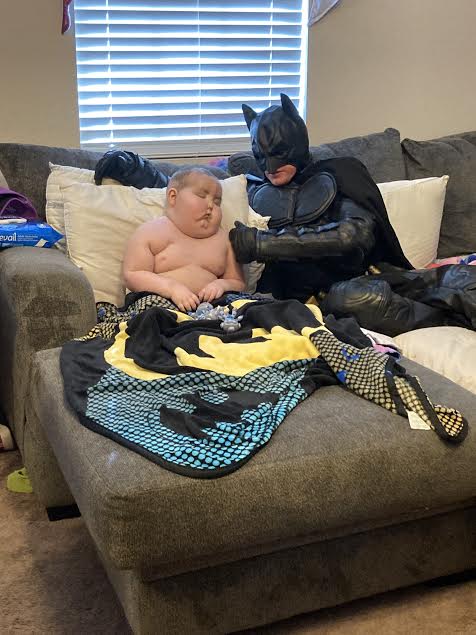 An Andalusia child received the surprise of a lifetime on Thursday when Batman walked through his door.

Texas local Tim Linder drove 16 hours at the drop of a hat to surprise a young Andalusia child who is suffering from a diffuse intrinsic pontine glioma (DIPG,) a type of brain tumor.

Linder’s journey as dressing up as superheroes began seven years ago, but turned his love of making children smile into a non-profit called Next Level Heroes.

“For seven years of my life I have done things like this,” Linder said. “We actually became a non-profit in November. Yesterday [Wednesday] we got some information on the kiddo that we went and visited, and we were told that he doesn’t really have long to live. We talked to the parents and they thought that it would be a wonderful idea to bring Batman down to visit them to try and spread joy to everybody.”

With only $146, Linder was able to raise money within 24 hours to make the 16-hour trip to Andalusia.

“We reached out to a couple of people and were trying to get an airplane,” Linder said. “We weren’t really able to do that, so there were multiple people that ended up donating to help us get down here. We left that night and ended up getting to Andalusia at 1 p.m., today. Within 24 hours, we set the visit up, raised the money and made it happen thanks to the wonderful people in the community and people that helped out.”

This trip was one of the more sentimental ones for Linder, who said it took him back to the main reason why he started visiting children in the first place.

“When I was 15 years old, my neighbor asked me to dress up as Spongebob and come over to surprise a girl who also had DIPG,” Linder said. “She was just so happy to meet Spongebob and ride a camel. That was her dream and during that visit, she pulled me close and whispered in my ear, ‘Spongebob, you’re my hero,’ and I remember being 15 years old and thinking that that was one of the most amazing and wonderful feelings that I have ever felt. So, when I graduated, I bought a Spiderman suit because I thought that Spiderman fit me because I was a gymnast. From that day forward, I have tried to reach out to the community and those around us that are having different problems with their children.”

Linder said his first reaction with the child from Andalusia did not go as he expected, but in the end it turned out amazing.

“When I came in as Batman, he was a little scared, because Batman is kind of dark,” Linder said. “So, I thought, ‘You know what, let me put on my Spiderman suit,’ and the dad said, ‘Well, you know, Spiderman is actually one of his other favorites.’ So I jumped into the Spiderman suit and when I walked in I got a little smirk and he gave me a high five and knuckles. I didn’t get but really a couple of moments worth of reaction, just because he is really weak, but I could definitely tell that he was happy for a minute. I definitely think that Spiderman came in and saved the day.”

CANDYLAND IS A GO (with minor modifications)