REMEMBER WHEN: Beauty Queens in Andy 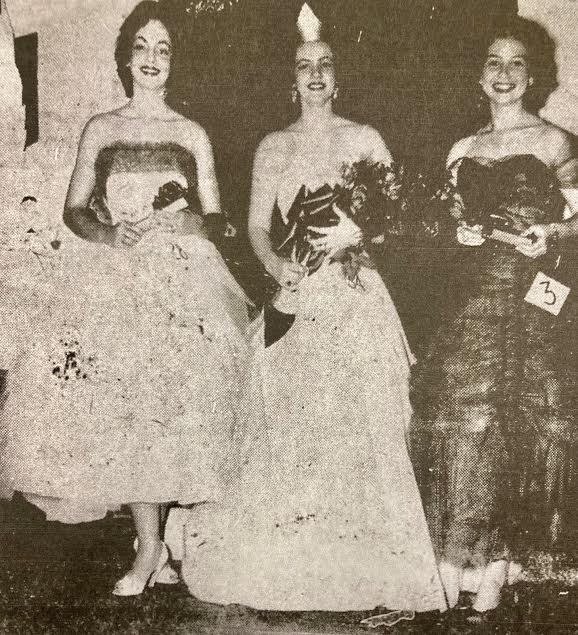 I love that 1938 Johnny Mercer & Warren hit tune made popular by Bing Crosby – “You must have been a beautiful baby, ‘cause baby look at you now!”

Andalusia has had its share of beauty queens. Back in the 1950s and 1960s, “Miss Andalusia” was the title. This was the forerunner of “Miss Memolusia.”  The beauty contest was held on the Martin Theatre stage. The contestants would line up at the Youth Canteen in the Coca-Cola/Ice Plant building on the corner of Burnette and Crescent Streets and walk in through the back door of the theatre to parade across the stage to a packed audience.

A memorable winner in 1956 was Miss Mary Emma Moates. She was the daughter of Mr. and Mrs. Jake Moates and a member of the AHS Junior Class that year. She had already been the second place winner in 1955 and in 1953. Mary Emma was crowned by Miss Patricia Evers the “Miss Andalusia” of 1955.

The Andalusia Beauty Revue during that era was sponsored by the Coterie Club which donated all of the funds to the East Three Notch Grammar School special needs class. Mrs. Davis Gantt, Coterie Club’s president, presented Miss Moates with a bouquet of red roses and gifts to the second and third place winners, Miss Earnestine Spicer, and Miss Gloria Jacobs. Mayor Tracy Wilder presented the trophy.

An outstanding high school student, Miss Moates was described by The Andalusia Star News as “setting a new target for pulchritude honors” as she had gained numerous beauty awards in the Peanut Festival and Pensacola’s “Fiesta of Five Flags” winning that title, “Queen of Nylon,” and receiving an all-expense trip to Cuba and a $1,000. wardrobe. She was a talented member of the Andy Hi Glee Club and Girls Chorus serving as an accompanist and soloist for musical ensembles. The lead in the Junior Class play was her own. Not only was she a cheerleader at AHS but also a War Eagle cheer captain later at Auburn University. It is no surprise that she became a beauty in the Auburn yearbook, Glomerata, and a dorm sweetheart of Magnolia Hall.

All along this writer receives notes from Mary Emma now known as Mrs. Charlie Vickery of Navarre, Florida, both of whom are retired and enjoying life but always reminiscing about their growing up days in Andalusia.  She loves subscribing to and reading The Andalusia Star News. Charlie Vickery’s father was once the newspaper editor. Let me share a story of hers from the 1960s now that we are getting close to the Veterans Day month of November.

“I especially enjoy that I know so many of the people you write about in Remember When. Just thought I would mention that the term “waiting wives” to my knowledge began during the Vietnam War. In 1968 when Charlie was serving in Vietnam, I and our three sons lived in Andalusia with my mama and daddy at their home on Prestwood Bridge Road.”

“At that time, there were 21 “waiting wives” in the area. Among them were Grover Nell Little Tadlock, Sylvia Pound Trimble, Dodie Scherf Bradley, and many others. Some met their husbands for R & R (rest & relaxation) in Hawaii mid way through what was usually a 13-month tour. Charlie was able to hitch an Air Force ride all the way to Eglin Ai Force Base and was able to come home for a visit with us and his parents, Louise and Byron Vickery. It was so hard two weeks later seeing him return to the war zone.”

“Our granddaughter Amanda Vickery Moore is married to a fine man who served over in Iraq. She and her husband kept in close contact through the mail but especially on Skype. Charlie and I spoke only once by radio. I imagine your folks, Marge and Charlie back in World War II, just had contact through the mail. I have our letters from so far away back then safely tucked away in trunks! Anyway just to let you know, we enjoy the memories!”

Well, Mary Emma was almost right about the mail in the old days of wars being the only communication with the husbands and wives or boyfriends and girlfriends back home. I still have a plastic record in my parents’ mementoes that the Army and Navy soldiers often had the opportunity to make. The cover read, “THIS IS A RECORDED MESSAGE FROM YOUR MAN IN THE SERVICE.” In about 1945 Daddy and some of his buddies went into a recording booth in Honolulu and sang a song while cuttin’ up, eating pineapples and coconuts, and drinking who knows what! Or that’s what my mother said anyway! One could record a message like that and send it to their “gals” back home. Those were the days. It is fun to Remember When.