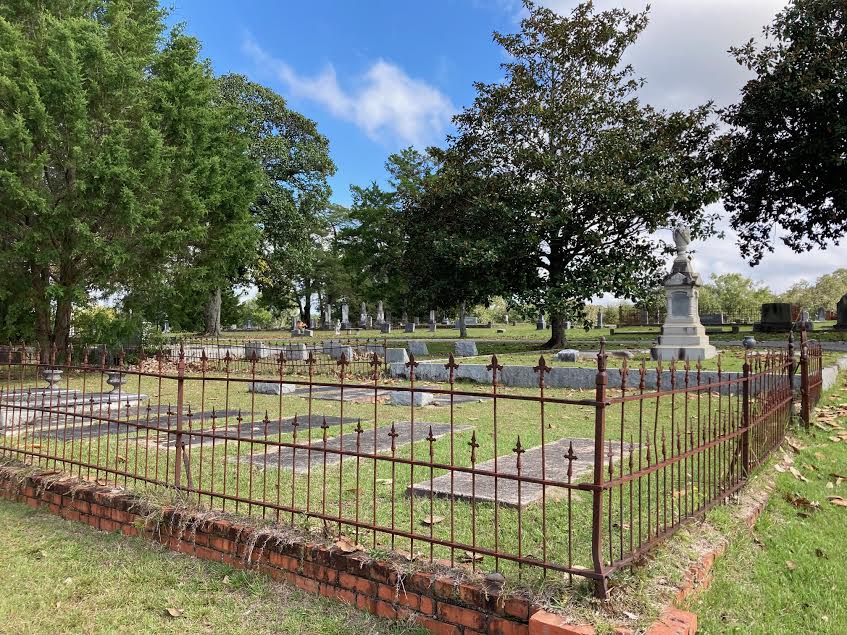 There is no better time to write about the historic Magnolia Cemetery than in the month of October around Halloween. The Covington Historical Society usually has a fall program presented about Magnolia Cemetery, the oldest known cemetery in the city of Andalusia.  It is believed that the resting place was established in the mid 1850s. The town moved up the hill from the river village, Montezuma, in the 1840s. 40 acres were acquired by the founding fathers for the original town of Andalusia. On this parcel, a place for a courthouse was reserved as well as a space behind the courthouse for a community church and an adjoining cemetery.

So far, this writer has not found in the old newspapers when the city cemetery became named or known as the Magnolia Cemetery. In the 1890s and early 1900 editions of The Covington Crescent and The Andalusia Times, references to burials and cleaning projects just lists “the cemetery.”

July 2, 1890 – “Now that the cemetery fence has been built in a neat and substantial manner, our people should come together and clean off the graves and cut away the undergrowth. This is a duty that we should feel called upon to perform. Let all who feel interested turn out next Friday.”

April 23, 1892 – “We believe our people to be equally as patriotic as those of sister towns where memorial exercises are always held. Then let there be a good turnout at the cemetery next Tuesday to pay some slight tribute to the memory of the sleeping heroes of the Lost Cause.”

June 25, 1892 – “It has been suggested that the citizens of Andalusia and vicinity meet at the cemetery on Friday for the purpose of cleaning off the same. Everybody requested to be on hand with the necessary implements to do the work. There should be a prompt and full attendance.”

September 22, 1893 – “A friend requests us to again call attention to the unsightly condition of the cemetery. We have repeatedly urged upon our people to meet and clean it off. The work is badly needed.”

June 28, 1895 – “It was suggested by the mayor at the council meeting that a day be appointed by the citizens to be known as ‘Cemetery Day’ when all citizens owning a lot in the cemetery should meet and improve the grounds. It is a most commendable suggestion, and our people should cooperate in the movement. The cemetery is deplorably neglected and its appearance is very much out of harmony with the reputation of the town. Surely it will not be permitted to remain in its present condition much longer.”

March 20, 1907 – “Owing to the dilapidated condition of the gates and fences, stray cattle roam at will in the cemetery. The necessary repairs should be made at once.”

August 23, 1907 – “A meeting was called at the Methodist Church at which ladies representing all the churches were present. The object of the meeting was to devise plans for the improvement of the cemetery and our town in general. It was decided for the immediate needs to solicit a subscription from all who were interested in the good and much needed work in Andalusia. For the future work, a society was formed to be called the Improvement Club. It is desired to have as members all ladies of Andalusia at all interested in the beautifying and care of the cemetery and town.”

In Sidney and Polly Waits’ 1995 book indexing Magnolia Cemetery, they state, “Time has erased many of the early graves in the old cemetery. The elements caused many markers to decay beyond recognition. Many graves that had wooden markers have long since disappeared. Two costly courthouse fires have consumed all the early land records and there are no recorded deeds to go to and determine lot ownership. A few families do have their original deeds to lots in old Magnolia. (Wish I knew who!)  Two additions have been added to the original Magnolia in 1926 and 1938. It is very difficult to determine where many lots begin and others end.”

“So much of the town’s history is there – horse traders, saloon keepers, doctors, lawyers, bankers, mayors, businessmen, and veterans of all wars. The earliest grave visible dates 1855 but it is reasonable to assume that there are many graves much earlier.”

The City of Andalusia continues to make significant contributions in the upkeep of Magnolia Cemetery in cleaning and maintaining the grounds and grass plots.

The Waits book can be found at the Andalusia Public Library available for those who desire to locate their ancestors and obtain genealogy information.

A 1906 newspaper article that appeared in The Andalusia Times titled, “HONORED CITIZENS – Local History and Reminisces,” quoted early residents of Andalusia –  Judge Andrew Fletcher and Garrett Stanley. The judge came to Covington County in 1849 and had held almost every office in his county. Stanley had lived in Andalusia since 1856 and had been a long and faithful member of the old school Baptist church.

These old southern gentlemen related many incidents of local history. As they exchanged their recollections as to many interesting matters of long ago, they gave the year of the establishment of Andalusia as the year of 1843, the county seat having been moved to this point from old Montezuma on the Conecuh River some four miles away.

Mr. Stanley remembers the time well. He says that at the time a Frenchman by the name of Nichilis opened a saloon where the Henderson block (on the Public Square) now stands. He also told of the many deer, wolves, and cattle with which this section of the country in years gone by could boast. He stated that he candidly thought he had killed more deer than any man now living and that his dad killed many wolves. Stanley and Judge Fletcher stated that many years ago, Hose Holly, an old settler, owned at one time as many as ten thousand head of cattle.

Judge Fletcher said that when he came to Andalusia, there were thirty people living there and that he helped to build the first church (frame) which had recently been torn away to make room for the $20,000. brick church (Baptist).

Fletcher also stated that the first person buried in the “city cemetery” was Miss Jane Russell who at the time lived with J. W. B. Carson, a prominent attorney. She was burned in trying to extinguish a fire, woods being on fire where part of the resident portion of the town was situated.

The Waits book does not have a listing for Miss Russell since her grave marker was probably a wooden one and has long been weathered away and disappeared over time.

This article can be considered “an historian’s find.” The conclusion reads, “It is more than probable that the youngsters of today are not so familiar with local history as these pioneer citizens who chased the abundant game in the palmy days of Covington.”

And so this still holds true today. May we continue to know the importance of our original “city cemetery” as we Remember When. 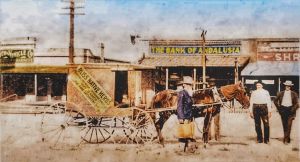