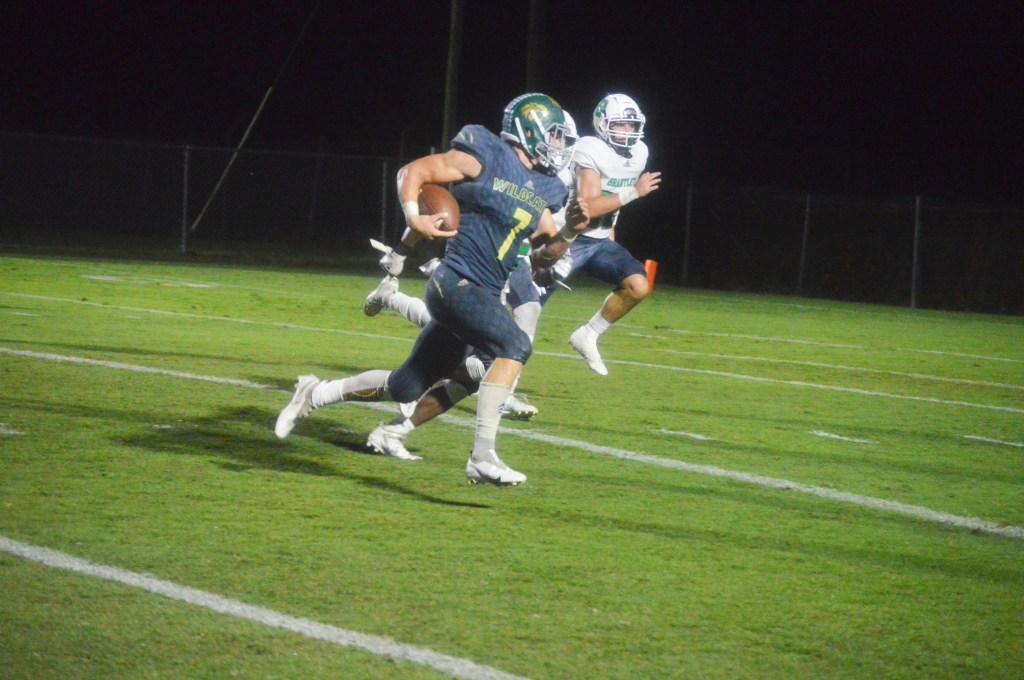 The Florala Wildcats varsity football team (7-2, 4-2) started off strong, but could not hold off the undefeated Brantley Bulldogs in a tough Class 1A region matchup Friday night, losing 52-36.

Brantley started off with the ball on the 35 yard line.

The Brantley quarterback took off going to the opposing 30 yard line.

With 9:35 left in the quarter, Kenuwyn Dixon had a catch to convert on fourth down to the 15 yard line, but the Bulldogs ended up turning the ball over on downs on the 12 yard line.

Dixon had two big catches on the next drive to get the Bulldogs down to the opposing 30 yard line with 4:35 left in the quarter. Morell Edwards had a catch and ran to the 1 yard line where Tucker Kilcrease punched it in for the touchdown. After a failed PAT, the Bulldogs were trailing 8-6.

Anthone Stone stepped up for the Wildcats, returning the next kickoff all the way to the opposing 37 yard line.

With 2:05 left in the first quarter, Reese rushed to the 2 yard line then punched it in to make it 16-6 after Zane weeks got the two point conversion.

At the end of the quarter, Reese had a big interception for the Wildcats, but they ended up punting at the start of the second quarter.

The Bulldogs took advantage of the short punt when T. Kilcrease ran into the red zone at the 17 yard line.

Kedrick Brown then ran it to the two yard line to set up Daquan Pittman to punch it in for the touchdown. After Pittman scored the two-point conversion, the Bulldogs were still trailing 16-14.

With 6:05 left in the half, Dixon picked off Coleman’s pass on the 38 yard line. T. Kilcrease then connected with Brown who took it to the house to get the first Bulldog lead of the game 22-16 after 10 scored a two-point conversion.

On the next Florala drive, Brown picked off another pass of Coleman’s making it Brantley’s ball on the 26 yard line.

T. Kilcrease connected with Westley Person and took it to the end zone to increase the Bulldog lead 29-16.

With 1:10 left in the half, Walt Johnson intercepted the ball, but Brantley ended up having to punt.

As time expired, Coleman connected with Howell for a 40 yard touchdown reception to cut the Bulldog lead 29-22.

The Wildcats received the ball to open the second half, but Brantley shut the Wildcat offense down, Carson Jones blocked a punt and Robert Shine jumped on the ball in the end zone to make it 35-22 after Howell blocked the PAT.

After a turnover on downs, Brantley took over at the 50 yard line with 7:15 left in the third quarter.

Shine rushed to the 23 yard line and then took it to the end zone to increase the Bulldog lead 41-22 after a failed two point conversion.

The next Florala drive started out strong, with Reese rushing to the 47 yard line. Howell then faked a punt and rushed to the 18 yard line with 2:05 left in the third quarter.

Coleman then rushed to the 7 yard line for the first down to end the third quarter.

To open the fourth quarter, Dixon intercepted the ball in the end zone and took it 100 yards all the way to the opposite end zone to make it 46-22.

Brantley did not back down. Shine rushed to the opposing 26 yard line with 2:09 left in the game. Then T. Kilcrease took it to the house with 50.5 seconds left to end Brantley scoring effort at 52 points.

With 31.9 seconds left in the game, the Wildcats gave one last effort when Coleman connected with Stone for a touchdown. Coleman ran in the two-point conversion to end the scoring effort for the game 52-36.

“We played awful,” Brantley head coach Roland Jones Jr. said. “When you have 14 days off and 10 kids out it makes a difference when you don’t get to do the things that you are supposed to do. That is just the world we are living in right now and we have to overcome stuff like that.”

Some positives that Jones Jr. saw was that his kids didn’t quit.

“Defensively, we have got a lot to work on,” Jones Jr., said. “We play 20 to 25 kids, but we have just got to get better. We haven’t been tested and that’s just apart of being in this region. It wasn’t our best outing, but we got a victory and that’s what matters.”

“We had some turnovers that really hurt us,” FHS head coach Chris Littleton said. “It was honestly just guys trying to make plays. I don’t fault anybody on it. You try to make a play and you force one in there. We may have been trying a little to hard. Those turnovers really cost us because we gave them a short field two or three times, a punt block for a touchdown and a couple of turnovers.”

Looking towards the playoffs in two weeks, Littleton said there are some things that they need to clean up.

“We need to make sure that we do not turn the ball over like that,” Littleton said. “We don’t have a lot of depth, but I mean, it is 1A football. We have to create some depth and I think we did a little bit of that tonight. We are going to have to have some of those guys step up.”

Overall, Littleton said that his players played their tails off.

“These guys really wanted it,” Littleton said. “They were so close where they could almost reach out and get it and hopefully that puts a little fire in them going into the playoffs.”