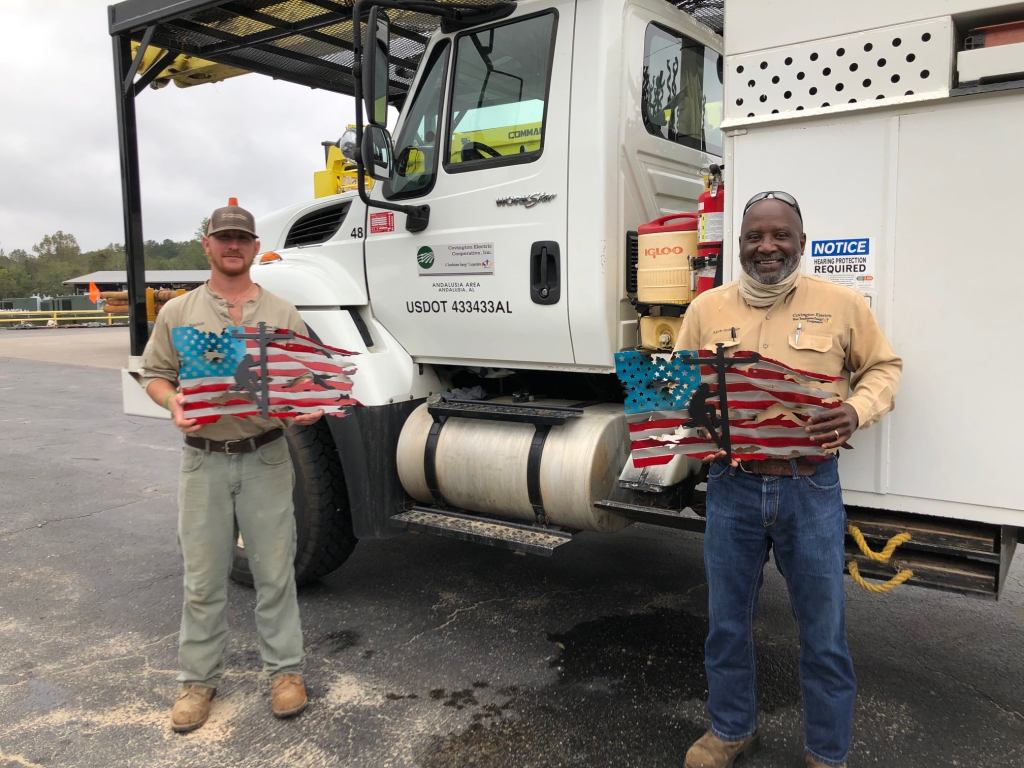 Each year, the Covington Electric Cooperative recognizes two linemen who have climbed the most poles. Peyton Garner was awarded the first place honor, followed by Kevin Anderson.

Patty Seay explained why it is important for linemen to climb so many poles each year. “So this is a way to keep that skill sharpened, that way they are prepared and ready to respond when repairs are needed,” Seay said. “The awards are used as a way to encourage them by recognizing the top two each year, and they are acknowledged for that.”

Seay said that many people do not know what work goes into being a lineman.

“They think it’s just from a bucket truck, so it’s really important that all of our lineman can make repairs while hooked to that pole,” Seay said. “We saw that as we were making repairs after all of the hurricanes this year in our service area and in Louisiana. It was a rural swampy area that you just could not drive up to, so they had to climb a lot of poles.”

Peyton Garner was introduced to Covington Electric Coop when he graduated from Andalusia High School in 2016. After a few weeks of learning about the job, Garner knew that he wanted to be a lineman.

“I started out here after high school part time and about 3 or 4 weeks into it, I fell in love with it,” Garner said. “That’s what I wanted to do.”

With only four years of experience as a lineman, Garner said he has learned a great deal about the job from his coworkers.

“I’m not doing any different from what these other guys are doing and there are some doing this longer than I’ve been alive,” Garner said. “They teach me and they let me do it.”

Garner said he finds his job rewarding in more ways than one.

“It’s great. When the lights go out and families have been out of power with big storm situations, it can sometimes take over three or four days, maybe a week and we finally get them on,” Garner said. “Yeah it pays well, but that’s worth more sometimes.”

Kevin Anderson has reached 20 years of service with Covington Electric Coop. Anderson began working for them as a custodian and quickly moved up to a lineman.

“I was working at the box factory and it shut down. I had heard about an opening at Covington Electric for a custodian, so I became one,” Anderson said. “They said it might last 6 months or 6 years. I impressed them with my work ethic and they hired me on the outside crew and sent me to school to become a lineman”

Anderson said he is a service lineman, a job that requires many long and spontaneous hours.

“I go out and hang security lights, or if there’s a limb on the line I go check on that type of stuff. My job is mainly on the service,” Anderson said. “We stay busy and work long hours. Sometimes we have to go at 2 am sometimes to go check on it.” Being a lineman is a title that Anderson is proud to hold. “I’m very grateful to have this job. The lord blessed me with it and I love going out to meet the people and help anyway we can.”