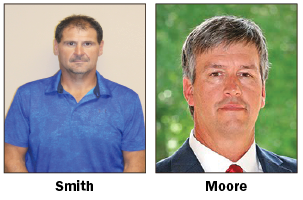 Smith said he is proud of the voter turnout on Tuesday and looks forward to serving Covington County.

“I feel very honored and privileged to have as big of a turnout as we did and to get the support I’ve had through this whole election,” Smith said. “I’d love to thank my family for support, my friends for supporting me, and especially the voters of Covington County for putting their trust in me to lead District 2 of Covington County.”

Barry Moore thanked God, his family and multiple supporters on Tuesday evening after being declared the victor in the AL-2 congressional race.

“If you know anything about us and our family”, Moore said, surrounded by his family at the podium, “you know we want to give the Lord the glory for this win.  It’s been a fascinating journey.  Back when this began, we felt called as a family to do this.

“We’re in a battle for the heart and soul of our nation, and we want to do justly as we go to DC.  We’re humbled to be here, and we want to continue to walk with Him as we serve this District, this State, and our nation.

“It hasn’t always been easy, but we’ve seen how the Lord can break you, make you and shape you into what he wants you to be.  That’s what we’ve been through these last months, and I hope we can continue to go where He calls in the years to come.”

Moore will assume the seat currently held by the retiring Martha Roby.  He is a small businessman, Veteran, husband, and father of four from Enterprise.

Donnamy Steele and Christopher Smith contributed to this article