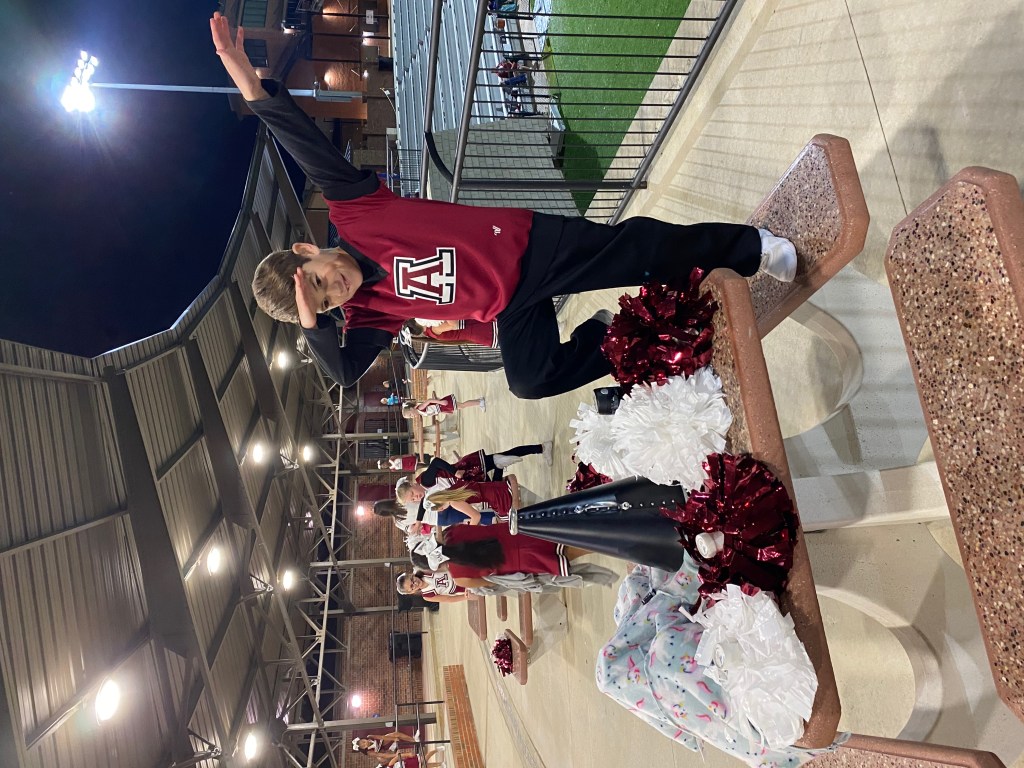 Stepping outside of the status quo is something that eight-year-old Adam Buechner aspires to do. Adam Buechner is a third-grade male cheerleader at Andalusia Elementary School.

After expressing to his parents that he wanted to become a college cheerleader in the future, Adam signed up to cheer on the sophomore squad at AES, making him the first male cheerleader that Andalusia City Schools has ever had.

Adam’s mother, Alry Buechner, said she had never seen a kid as passionate about Auburn football as her son. When he was around six years old, he first told Alry that he wanted to cheer for his dream college.

“This year I asked if he still wanted to be a cheerleader and he said yes ma’am, so I asked if he wanted to try out for cheer and he said yes ma’am. And I was like, ‘Really? Okay,’ and I signed him up. The coach was like, wait it’s a boy? I believe he really liked it. He’s the first elementary school male cheerleader ever that I’m aware of. I looked it up online and didn’t see anything for elementary, and he’s the first male cheerleader ever for Andalusia.”

The outpouring of support Adam has received was both surprising and reassuring, said Alry. The uncertainty that followed Adam’s journey to becoming a cheerleader led to second guessing whether it was the best decision for him, but after receiving positivity from the community, Alry was confident that her son would enjoy the experience.

“I was really kind of unsure and I asked if he was sure he wanted to do this,” Alry said. “He sold a bunch of tickets for his uniform because a lot of people really wanted him to do it and he got a lot of positive feedback.”

There was a learning curve for the cheer coaches because they didn’t know what to do for the pom poms and megaphones, and they special ordered a male cheer uniform for Adam. Alry said she was glad to see that the coaches seemed really accepting of Adam and started modifying things to include a male cheerleader.

“Maybe this isn’t so odd that a boy is a cheerleader,” Alry said. “Some people are accepting and some are not because of how they are raised and I want to raise awareness that some male kids may want to but are afraid of being judged. If they see he was supported then maybe things would be different.”

Adam’s parents, Alry and Tim, said they are proud to see him come out of his shell and try cheerleading. Making the decision to become a cheerleader was a big deal for Adam and has challenged him in great ways, Tim said.

“Adam is walking on new ground for a male his age, but that doesn’t mean he can’t do it,” Alry said. “Whatever you want to do, no matter how unique you feel, go for it if it brings positivity to your life. I think the younger you start off, the better you’ll be.”

Adam even received a signed cheerleader uniform from the Auburn University head coach. 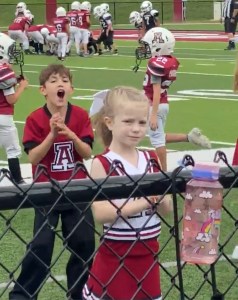