Ensemble hopes to inspire positivity in this year’s show 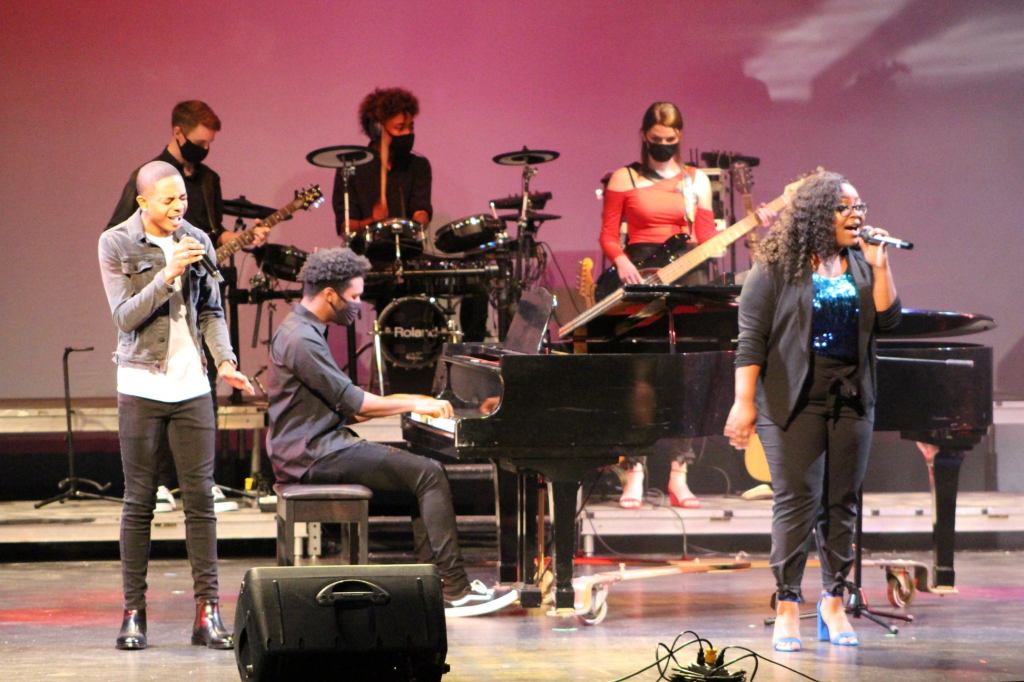 The LBW Community College Ensemble has an entirely new band this year and is ready to spread the message of positivity around South Alabama.

Eight of the singers in the Ensemble stayed, while 16 new members joined.

“It is a challenge always,” Director Johnny Brewer said. “But it is definitely a challenge this year because the setlist is completely new except for one song.”

The group’s setlist contains three songs from the movie The Greatest Showman including The Greatest Show, A Million Dreams and This is Me, the song True Colors from the movie Trolls, Overcomer by Mandisa, See the Light by Toby Mac, Six Feet Apart by Luke Combs, Get Here by Oleta Adams, Mercy by Shawn Mendes, Fix You by Coldplay, Survivor by Destiny’s Child, River Deep Mountain High and an encore song by Queen The Show Must Go On.

“The idea behind the setlist was, that myself and my assistant director Kathy Dowdy talked a lot about trying to pick music that was about overcoming everything that 2020 has thrown at us,” Brewer said. “There was the shutdown, the virus, the racial struggles that we have been through and all of the political stuff and the 27 hurricanes. I tried to pick stuff that would say, ‘No matter what, we are going to beat this.’ I wanted to bring a positive message, but also address the darkness.”

When things shut down in March, Brewer said he could see a physical change in his students.

“I have always felt like music has the power to just put us in any place that we can imagine emotionally,” Brewer said. “After the Ensemble was shut down on March 16 last year, I think a lot of the students’ mental state was, ‘How did this happen?’ We didn’t get to do our Family and Friends Concert and we didn’t get to finish all of our performances. It kind of just felt like we did all of this work for nothing. Throughout the summer, all of the things that we went back and forth on were what we were going to do about the future. The only thing that I wondered was if the Ensemble was going to survive because what I saw with the shut down was an opportunity for schools to completely cut music because they couldn’t find a way to do it. That really was a concern of mine.”

One thing that will be different about the Ensemble is the choreography being simple because of social distancing.

“The show looks different because there isn’t a lot of couple work in the dancing,” Brewer said. “It’s impossible to teach choreography and be six feet apart. It’s a different look from what people are used to, but it is what we had to do to make the ensemble work.”

Usually, the Ensemble would take trips to the surrounding schools in the area, and with COVID-19, Brewer said he is still making the effort to do just that.

“We have made the effort to see if we could travel and perform for reduced audience sizes,” Brewer said. “The only thing that is for sure on the books is a show in Elba on April 1, on the lawn of the courthouse.”

Looking at this year, Brewer said he is just happy that it exists.

“I am just happy that it exists, that music lives,” Brewer said. “I’m happy that the legacy that has been created here by Jerry Padgett, Greg Aplin, myself and Kathy Dowdy, gets to continue and that the talent that these kids have gets to be used. I am really looking forward to seeing where this group goes in terms of production.”

Recently, the Ensemble performed for the first time since last March for faculty and staff on Monday, as well as holding a smaller performance for family and friends on Tuesday.