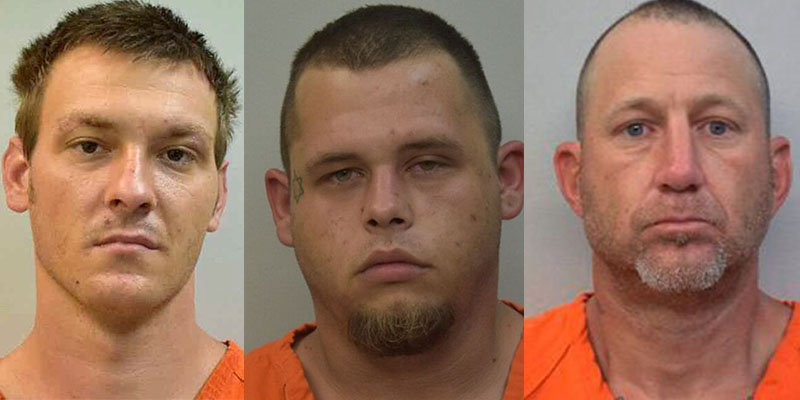 Morgan Douglas, 23, of Andalusia (left), along with two other men, Dixon Fife, 24, of Lake Charles (center) and Michael Roberts, 43, of Jacksonvile, Florida (right) are facing charges following the discovery of a burned body in DeQuincy, Louisiana.

Morgan Douglas, 23, of Andalusia, Alabama, was booked on one count of 2nd Degree Murder, one count of Aggravated Arson, two counts of Obstruction of Justice and one count of Criminal Conspiracy.

Dixon Fife, 24, of Lake Charles, and Michael Dean Roberts, 43, of Jacksonville, Florida, were each booked on one count of Aggravated Arson, two counts of Obstruction of Justice, one count of Criminal Conspiracy and one count of Accessory After the Fact to 2nd Degree Murder.

In the morning hours of November 20, the Beauregard Fire District 2 responded to a wooded area off of Alston Cemetery Road in DeQunicy for a report of a vehicle fire. Once firefighters had the flames extinguished, a body was discovered inside.

Official identification and cause of death are pending an autopsy by the Beauregard Parish Coroner’s Office. However, investigators believe the victim is a 27-year-old female Lake Charles resident.

Through extensive investigative efforts, deputies were able to connect the suspects to the victim through Fife, who had known her for several years. Fife and the other two men were roommates working together doing storm recovery jobs in the Lake Charles area.

Once the suspects were taken into custody, two of the three admitted their involvement in the victim’s death and disposal of her body.

Anyone with additional information about this crime is asked to contact our Arson Hotline at 1-844-954-1221 or share the information through our online tip form found at lasfm.org.