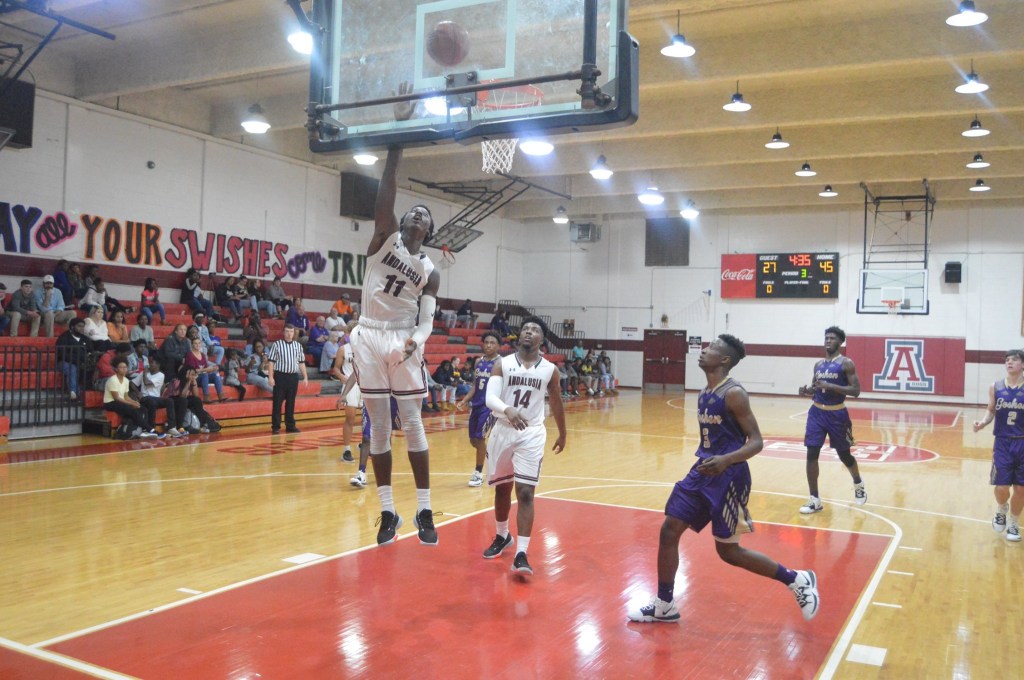 The Andalusia High School Bulldogs came out on top for their first game of the season against Flomaton High School 75-33 Tuesday night.

The Bulldogs got on the board in the first period with five free throws hit from Mike Hourel, two points from Omare Lattimer, a three-pointer by Tyler Sigers, two points and a free throw by Isaiah Brundidge and two points from Bryce Dorsey to add up to 17 points.

After halftime, Jake Wilson hit two more three-pointers, Hourel had two points and a free throw and Tyler Siger and Brundidge both had six points to put the Bulldogs at 61 points.

In the fourth period, Lattimer hit two three-pointers and got two points, Tyler Siger hit two free throws and Tyrese Sinkfield had four points to finish the scoring effort for the Bulldogs at 75-33.

“I think we played with great energy,” AHS head coach Brad Goldman said. “I challenge the guys for nobody to play harder than us. Things were sloppy at times, I mean it was the first game, and I’ll be honest, Flomaton was missing some key guys because of corona, but we shot pretty well. So, I was real pleased.”

With this being the first time back on a brand new home court for the Bulldogs, Goldman said it felt great to be back.

“The board and the administration helped us out and got the floors redone,” Goldman said. “This was the first time that we got to play on that new floor and the crowd was great and the energy was great at AHS, as usual.”

On Thursday, the Bulldogs take on an experienced Florala team.

“Florala’s got a pretty great team,” Goldman said. “I mean they won about 25 games last year and they have a ton of experience. They have about five or six seniors that have been playing for a really long time. They also have some really good guards. So, we have got to do our best containing those guys, hope we can keep them under control and hope we score more points than they do.”

Mike Hourel led the scoring effort for the Bulldogs with 19 points, seven rebounds and three steals.