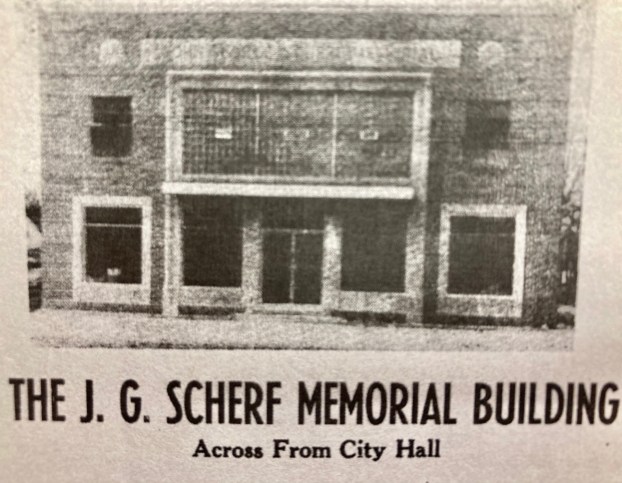 One of the favorite stories my mother read to me as a child was “The Story of Little Black Sambo” by Helen Bannerman, a Scottish author who penned this tale in 1899.

“So she got flour and eggs and milk and sugar and butter, and she made a huge plate of most lovely pancakes. She fried them in the melted butter which the Tigers had made, and they were just as yellow and brown as little Tigers.”

The story of the Annual Pilot Club Pancake Day goes back as far as the 1950s. As Editor Ed Dannelly editorialized in The Andalusia Star News in December 1953, “When you want something done in Andalusia, just turn to the Pilot Club. Those ladies can perform miracles without half-trying!”

I could not find mention of the pancake breakfast in the old newspapers until October 1957 even though in 1956, the Pilot Club sponsored their annual Bake Sale on Saturday morning, December 8, in front of Turner’s Store on the Court Square. “Delicious home-made cakes, cookies, and candies will be available for the holiday season.”

In May 1950, a ground-breaking occasion in moving ceremonies for construction of the $85,000. John G. Scherf Memorial Building was held on Opp Avenue across from the Andalusia City Hall. Headlines read, “Widow Spades First Earth for Scherf Building.”

The Scherf sons, Paul and John, Jr. attended the event. Assisting Mrs. Scherf was Bill Waller of Waller-Barnes Construction Co. with whom the contract had been signed for the building’s erection. Mayor Tracey Wilder declared in a short talk that this was a memorable occasion for Andalusia and surrounding trade territory for it marks the beginning of a project that is a memorial to a man (the late J. G. Scherf)  of outstanding ability and courage to be used as a community center for the general enjoyment of fellowship promoting the art of living together with good will.”

The building provided lounge rooms, rest rooms, auditorium, dining hall, office space, kitchen, and other spaces to be utilized as a service to a broad cross-section of the public.

Completed in the spring of 1951 and dedicated on April 7, 1951, the model two-story brick structure was opened for use. The local civic clubs, Lions, Kiwanis, and Rotary, all voted to stage their weekly luncheon meetings in the new Scherf Memorial Building.  Dinner costs were placed at $1.25 for each club member. Mrs. Pat Brown was signed to operate the dining hall and concessions of the building. The Pilot Club also began meeting at the new building.

October 17, 1957 – “WHAT’S HAPPENING? Yes, what is this world of Andalusia men folks coming to? Here are the Andalusia Kiwanians, a live-wire civic club, calling on the ladies of the Pilot Club to help them do the cooking for their annual ‘Pancake-Sausage Day.’ Some of the Kiwanians who do a bit of the cooking at home are in revolt and are refusing to prepare in public the pancakes and sausage so much in demand on a wintry morning. They are also moving their event indoors. The food will be served this year in the Scherf Memorial Building.”

November 6, 1958 – “Kiwanians and Pilots of Andalusia are joining in the annual observance of ‘Pancake Day’ on Saturday, November 8. The two civic clubs are going to serve pancakes with sausage, syrup, butter, coffee, and all the fixin’s at two locations. Pilots will assist the Kiwanians at the Scherf Memorial Hall when early risers can get breakfast by 5 a. m. Kiwanians will also operate a ‘Pancake’ stand at a location adjoining the Covington County Bank (corner of Yellow River Street). The ‘Pancake Festival’ is to continue until 3 p. m. Proceeds will go to under-privileged children projects of both clubs.”

Mrs. Irene Davis Butler, long-time leader/member of the Pilot Club, vividly remembers the pancake stand in the street beside the old Covington County Bank on the Court Square. She herself joined the Pilot Club in 1946. She has a vivid picture in her mind’s eye of the Pilot Club ladies in their aprons. No one knows for sure exactly when the late Pilot Ollie B. Brown concocted her famous pancake recipe that is still used today, but the ingredients are also put together and the method is  supervised in the kitchen perfectly by the senior club members. “Don’t stir that batch too much! Don’t pat the pancakes!”

So don’t ever underestimate the precision and organization of the Pilot Club today! They are prepared for take-outs and dine-ins in the Kiwanis Building with early morning hours for the hunters and early risers. The AHS Anchor Club girls are faithful top-notch assistants and servers. The BPW Christmas Bazaar staged in the same building is always looked forward to so that diners can attend with a full stomach and do a little Christmas shopping.

I still have a hand-made Christmas tree ornament my grandmother purchased for me when she took me to the “Pancake-Sausage Breakfast” in the Scherf Memorial Building in those early years. The Christmas season really kicks off each year the first Saturday in December with the breakfast that is an over 60-year old town tradition. Well, let’s not forget the outstanding Christmas parade that is usually the same weekend. The Pilot Club has many local charities they donate their proceeds to including their national brain-minders’ awareness projects. As we Remember When, let’s not forget to attend this year’s event. I look forward to enjoying those “Tiger” pancakes. Now readers, do take the opportunity to read Helen Bannerman’s timeless story to your children and grandchildren. 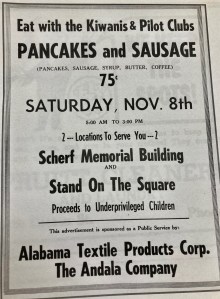