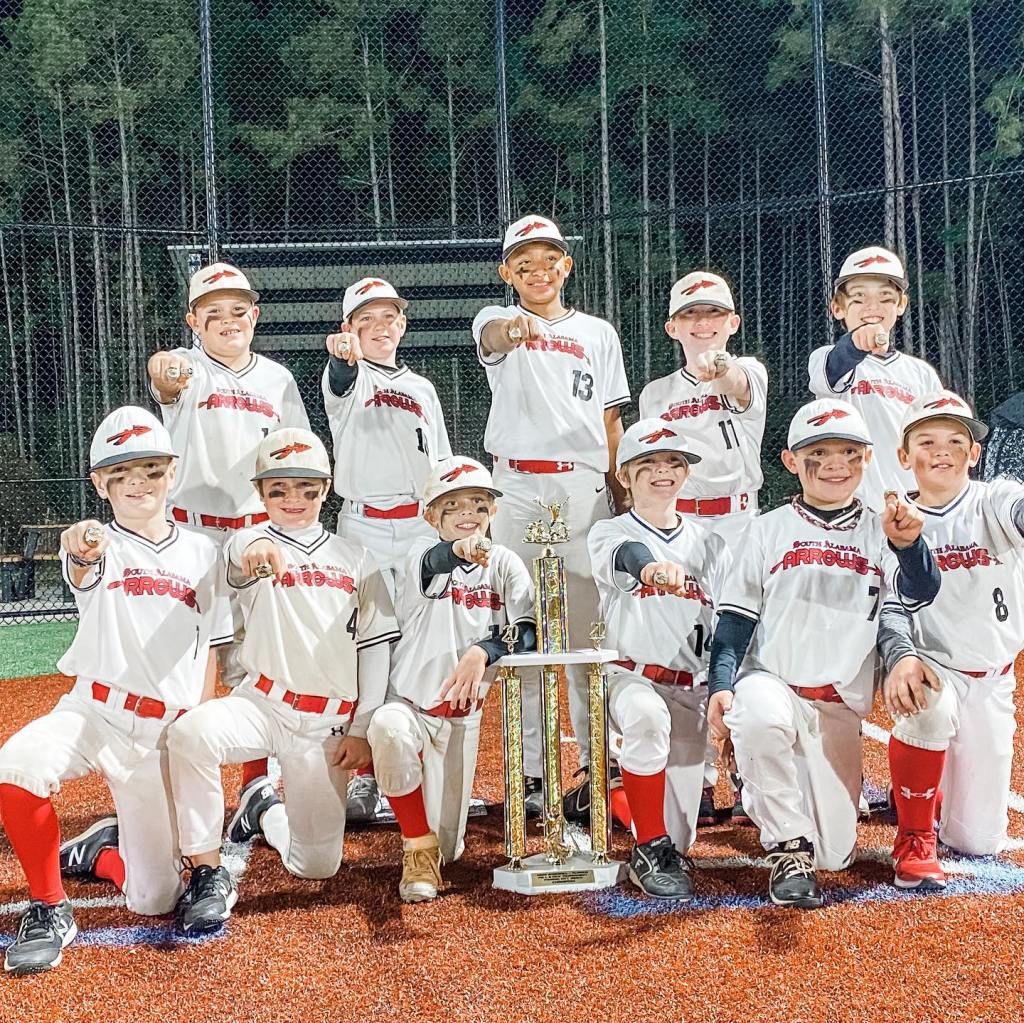 After a strongly batted second inning, the South Alabama Arrows took down the South Walton Hawks 17-1 on Saturday.

Weant was the winning pitcher for South Alabama. The pitcher lasted one inning, allowing one hit and zero runs while striking out one and walking one. Thorn threw two innings in relief out of the bullpen.

Diego R. was on the mound for South Walton. Diego surrendered 11 runs on six hits over one and one-third innings, striking out two. Ryder D. and Brent H. entered the game as relief, throwing one inning and two-thirds of an inning respectively.

Diego went 1-for-1 at the plate to lead South Walton Hawks 10U in hits.

Even though South Alabama gave up five runs in the second inning, they still defeated the Outlaws 13-5 on Saturday.

The big inning for the Outlaws came thanks to two singles and a groundout.

The Arrows secured the victory thanks to nine runs in the first inning.

South Alabama’s big inning was driven by an error on a ball put in play by Cooper Maynor, doubles by Farley Brannon and Houston Weant, a single by MJ B, and a groundout by Brock Bennett.

Farley pitched South Alabama to victory. Farley lasted one and one-third innings, allowing zero hits and zero runs while striking out four and walking zero. Row Thorn, Houston Weant, and Kaleb Covin all put in work in relief out of the bullpen, steering their team towards the victory.

South Alabama collected six hits on the day. Houston Weant and MJ Berry each racked up multiple hits for South Alabama Arrows. MJ and Houston all had two hits to lead the Arrows. South Alabama tore up the base paths, as three players stole at least two bases. Cooper led the way with three.

Kaleb Covin had all the right stuff on Sunday for the Arrows, allowing zero runs and besting Gwinnett Bandits by a score of 10-0

South Alabama secured the victory thanks to six runs in the first inning.

South Alabama Arrows  offense in the inning was led by Farley Brannon, Cooper Maynor, Row Thorn, Houston Weant, and Jackson Grimes, all knocking in runs in the inning.

South Alabama opened up scoring in the first inning. Farley drove in one when Farley singled.

One bright spot for Gwinnett Bandits was a single in the second inning.

Kaleb took the win for the South Alabama Arrows.

Kaleb allowed two hits and zero runs over four innings, striking out four and walking one.

South Alabama totaled six hits in the game. Farley and Kaleb all managed multiple hits. Kaleb and Farley all had two hits to lead South Alabama.The Arrows didn’t commit a single error in the field. Cooper Maynor had the most chances in the field with seven.

South Alabama ran off with the lead late in the game in an 11-3 victory over Pace Sandlot on Sunday.

The game was tied at two with South Alabama batting in the bottom of the third when Farley Brannon singled on a 2-0 count, scoring one run.

The Arrows secured the victory thanks to seven runs in the fourth inning. The Arrows’ offense in the inning was led by Jonathon Nolen, JB Barrow, Kaleb Covin, Cooper Maynor, and Row Thorn, all driving in runs in the frame.

South Alabama knotted the game up at two in the bottom of the first inning, when MJ Berry lined out, driving in a run.

The Arrows put up seven runs in the fourth inning. The rally was led by walks by JB Barrow, Kaleb Covin, and Cooper Maynor, a single by Jonathon Nolen, and a fielder’s choice by Row Thorn.

Farley Brannon allowed three hits and two runs over two and a third innings, striking out three. Houston Weant threw one and two-thirds innings in relief out of the bullpen. Houston Weant recorded the last five outs to earn the save for South Alabama.

The Arrows had nine hits in the game. Farley Brannon and Row Thorn each managed multiple hits for The Arrows.

They tore up the base paths, as two players stole at least two bases. Farley led the way with four.

Row Thorn shut down the Beach Sox, throwing a complete game shutout and leading the South Alabama Arrows to a 3-0 championship victory on Sunday

The pitching was strong on both sides.

Row Thorn struck out eight, while the Beach Sox pitchers sat down three.

The Arrows were sure-handed and didn’t commit a single error. Farley Brannon made the most plays with nine.

Row Thorn came out as MVP of the game.