RAY SIGNS TO PLAY SOFTBALL AT THE NEXT LEVEL 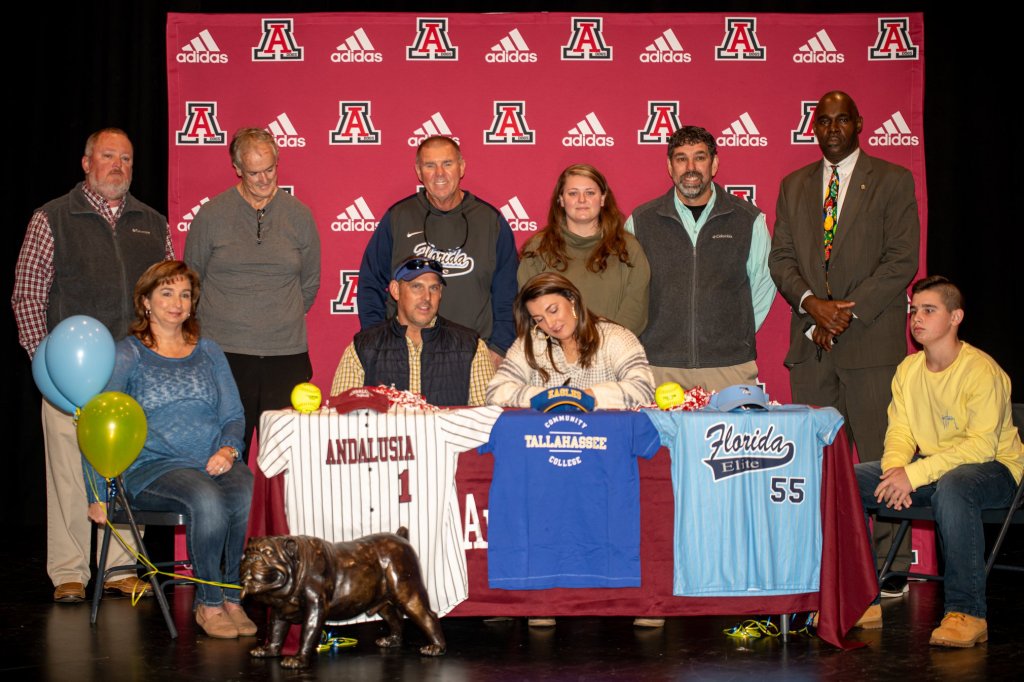 Andalusia High School senior Sydney Ray signed her letter of intent to play softball at the next level at Tallahassee Community College.

Ray got her opportunity at TCC from her pitching coach Wayne Henderson.

Once Ray visited the college, she said she knew she had found the right place.

“I went down there first with my mom and we both really liked it,” Ray said. “It is a small school in a big city. So, I get to have the college experience, but also be close with everybody at my school.”

Ray picked up a bat when she was around five years old to play T-ball, but knew that she wanted to play college ball since she was 10 years old.

“I started pitching right before I turned nine,” Ray said. “I was doing competitive cheer and then when I turned 10, my pitching coach got really serious and told me that I could play softball after high school. So, I have always had this goal of playing at the next level.”

Looking back at her softball career, Ray said that she is incredibly blessed.

“I don’t want to say that it is surreal, because I haven’t won the World Series or anything,” Ray said. “But I would say that I am incredibly blessed to have this opportunity. With COVID, it has made the recruiting process really tough. It is really an incredible opportunity.”

“With the travel ball team I was able to go all over and meet people I wouldn’t have met if I just stuck with high school softball,” Ray said. “It is just a completely different scenario than high school softball and I am blessed to have been given the opportunity to play for Florida Elite.”

With this being her senior year at Andalusia High School, Ray’s goal is to get the softball team as far as they have ever been in the playoffs.

“Last year when we got our season cut short, we were all like, ‘OK, this is the year. We may not win state, but we are going to get past Gulf Shores,’” Ray said. “I’m just looking forward to how we bond as a team. It seems like we always get pretty far in the playoffs and then lose steam towards the end. So, hopefully we will keep playing for as long as we can.”

To prepare for the next level, Ray said she is going to stay in her routine of daily pitching workouts.

“I haven’t received my workouts from the college yet,” Ray said. “But the main thing is that I am going to have to stay in shape. That’s the biggest thing with most people. Once they sign, they fall off and don’t stay and shape. So, I am going to make sure to do my daily pitching exercises and work hard.”

There are several people that Ray said had a hand in getting her this far.

“My biggest thank you are to my parents,” Ray said. “I also want to thank my pitching coach, Coach Wayne, Coach Mikel and the rest of the AHS coaching staff and my travel coach Rick Green. I could name a million and one people, but my biggest thank you is to the Lord for making me a left-handed pitcher.”

Ray plans to study education in college and hopes to keep playing softball for as long as she can.