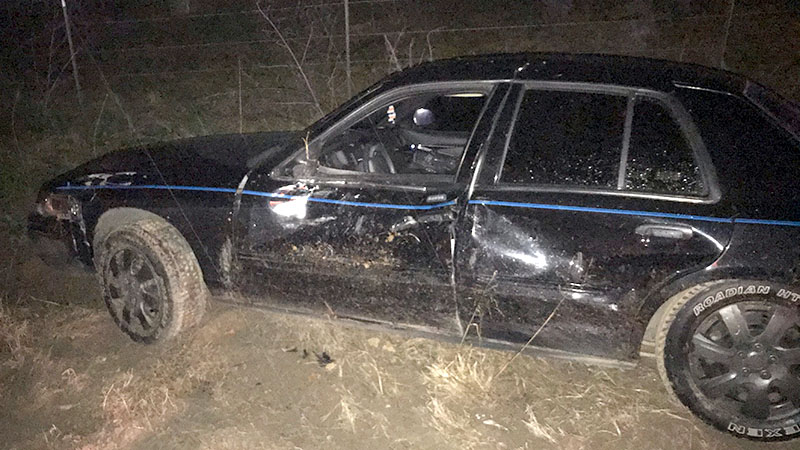 The vehicle of a Covington County deputy after being forced off the road and then struck by a Crenshaw County man who is now facing attempted murder charges.

A Crenshaw County man was arrested Wednesday and is facing charges of the attempted murder of a Covington County sheriff’s deputy.

According to the Covington County Sheriff’s Office, a deputy was returning to his home following his work shift at approximately 11 p.m. when he observed a vehicle parked on the side of the road as if he was entering the roadway. The driver of that vehicle, and the suspect, was later identified as Dalton Grier of Crenshaw County.

Grier pulled behind the deputy and began following very close, alerting the deputy who gave a flash of his emergency lights in an attempt to have Grier back off, which he did, according to the sheriff’s office.

When the deputy made a right turn onto U.S. Hwy. 29, Grier allegedly accelerated and struck the rear of the deputy’s patrol car and continued to do so until the deputy was forced off the road. Grier fled the scene momentarily.

The deputy attempted to pursue Grier, but his vehicle was disabled and stuck in the mud. While making contact by phone with the sheriff, Grier returned to the scene and rammed the patrol car in a T-bone fashion and then fled the scene again.

Grier was later found and arrested at his residence, charged with attempted murder and is being held in a Crenshaw County jail with no bond.

“The safety of our officers is paramount,” said Covington County Sheriff Blake Turman. “Our deputy was simply returning home from work and was attacked. This will not and cannot be tolerated. I’m thankful my deputy is OK but he has endured a very traumatic experience. Please keep all our officers in your prayers as this hits home for all of us.”