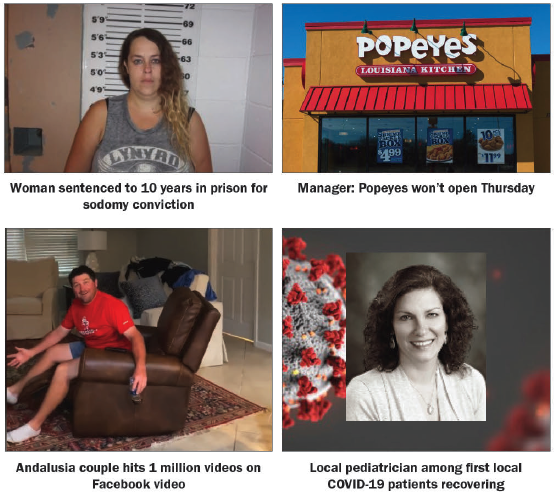 2020 was a year full of news stories, mostly related to COVID-19, but the staff at the Star-News scoured Google Analytics to find the top 10 stories of 2020.

In March of this year, The Andalusia City Council approved a resolution for the city to enter into a development agreement granting a 2 percent, 5-year sales tax rebate for the Covington Mall.

“It is exciting to be working with Andalusians, and not somebody from Mobile, Atlanta or Birmingham,” Johnson said. “We are dealing with home folks. That tells me a lot about the future, because you guys are going to care more about it. This is your home.”

This article received 7,155 page views on the Star-News website.

On the 14th of December, Andalusia High School alumni Sam Byrd, Jalen Cross and Orlando Green started Pre-Game Apparel after seeing a need in the black community of Andalusia for an urban clothing store.

Byrd said the group came up with the idea back in August. Now open, Byrd said they are the first urban clothing store Andalusia has had in a decade.

“We started this to provide the urban necessities that we need,” Byrd said. “Before, we would have to drive to Montgomery just to get clothes.”

Pre-Game Apparel has men and women’s clothing and is located in Andalusia at 1514 East Three Notch Street, Suite B.

This article received 7,155 page views on the Star-News website.

In August of this year, an Andalusia man was behind bars for rape.

John Devin Phillips, 23, of Andalusia, was arrested and charged with one count of rape in the 2nd degree and was booked into the Covington County Jail on a $20,000 bond.

This article received 8,761 page views on the Star-News website.

This is the first story in the rankings that is about COVID-19.

On March 27, The Alabama Department of Public Health reported the first case of COVID-19 in Covington County.

In a release that morning from ADPH, officials say the patient is a resident of Covington County.

As of March 27, 567 Alabama residents were confirmed positive with COVID-19.

Most patients with COVID-19 infection have mild respiratory illness along with fever, cough and shortness of breath.

Some have more severe symptoms that require hospitalization.

On April 1, Shaw Industries suspended its U.S. operations due to COVID-19.

Some campuses resumed operations on April 13.

During the temporary shutdowns, sales, distribution, administration and some manufacturing facilities will continue to operate to meet the needs of its stakeholders, including its customers, associates and communities where it operates, Shaw president Tim Baucom said.

It was unknown when the Andalusia plant would close, Shaw Corporate Communications director Sarah Martin said.

“The staggered shutdown will include our Andalusia facility,” Martin said. “The exact timeline for shutdown and startup varies by location.”

This article received 11,445 page views on the Star-News website.

Number 5: DR. BALDWIN ONE OF FIRST TO GET COVID-19

On March 28 of this year, a local physician who was recovering from the novel coronavirus sweeping the nation urged local residents not to panic, and to take basic precautions to protect themselves from the virus.

Dr. Gabrielle Baldwin, owner and principal physician at Covington Pediatrics, said she had been in self-isolation for days and was feeling well enough to spring clean when she received the results of her COVID-19 test on Friday. The symptoms felt very much like the flu, she said.

Her first symptoms appeared in the wee hours of the morning on Monday, March 23, she said. It had been 62 hours since she had seen a patient, and no one with whom she was in contact last weekend has exhibited symptoms.

Dr. Baldwin said that she decided to make her diagnosis public because the rumor that she was ill had spread rapidly in the community, and she wanted to be transparent with the information.

This article received 11,741 page views on the Star-News website.

Popeyes in Andalusia was set to be open this Thursday, March 12 of this year, but area manager Mary King said they did not have an opening date because of different issues.

“Unfortunately we do not have a definite opening date,” King said. “We are having electrical issues and register issues at the moment. We are trying our hardest to get everything fixed.”

In June 2019, The Andalusia City Council approved a five-year, 2 percent sales tax rebate to help offset the cost of bringing the fast-food restaurant to Andalusia.

City Council Pro Tem Terry Powell said the business would invest more than $1 million in building the restaurant and would hire an estimated 60 employees.

“We please ask that everyone be patient during this time,” King said. “We want everything to be working and ready to go, so we can provide excellent customer service when we do open.”

According to the Popeyes website, the company distinguishes itself with a unique New Orleans style menu featuring spicy chicken, chicken tenders, fried shrimp and other regional items.

It is one of the largest quick-service restaurant chicken concepts in the world with more than 2,600 restaurants throughout the world.

This article received 12,824 page views on the Star-News website.

In February of this year, a tragedy shook the community of Red Level when a 16-year-old student of Red Level High School died on that Thursday afternoon.

School officials said they worked hard to console the Red Level High School community, as well as family and friends.

“Since receiving the tragic news, we have implemented a crisis response plan to help students and staff respond to this sad and unfortunate death,” RLHS principal Randy McGlaun said.

This article received 13,853 page views on the Star-News website.

In August of this year, what started as a harmless prank video turned into an overnight viral sensation for Andalusia locals Lauren and Jordan Maynor.

After seeing an Instagram trend, L. Maynor knew her husband would be the perfect target.

The trend involves acting as an influencer talking to their “followers” in front of their spouse.

“I stumbled across this series of people doing this challenge on Instagram,” L. Maynor said. “I immediately thought that Jordan would be perfect for this. We actually had just gotten back from a baseball tournament that weekend and I completely forgot about doing the challenge. Well, I remembered when we got home and I quickly got up. He was just lounging in his chair, trying to watch a TV show and I knew I was never going to find a time that he was just sitting like that.”

This article received 14,025 page views on the Star-News website.

Since the original post, the video has now been viewed 3.8 million times.

On July 24 of this year, Cynthia Jean Stanley, 37, of Andalusia, pleaded guilty to Sodomy II before Circuit Judge Lex Short. Short sentenced Stanley to 10 years imprisonment for her role in the crime. Stanley had no prior felony convictions on her record.

Stanley was charged after an investigation revealed her complicity in sex acts perpetuated by her husband, Donald Stanley, 50, of Crestview. DHR initially received reports of child sexual abuse by Donald Stanley and a criminal investigation was opened. Several child victims from multiple families came forward to report what they knew about the crimes committed. Evidence tended to show that Donald Stanley was the initial perpetrator, but Cynthia Stanley thereafter became complicit in his crimes. Donald Stanley was also charged with several child sex crimes. As officers made contact in an attempt to serve the warrants on him, he barricaded himself inside his Okaloosa County, Florida home and committed suicide.

As a result of Stanley’s guilty plea, she will be a sex offender required to register for the remainder of her lifetime. And although not a part of the criminal case, Stanley will lose custody of her own children and never be allowed to live with her children again.

This article blew all of the articles out of the water by going viral with 273,533 page views on the Star-News website.